Joanna Rajkowska’s public project All-Seeing Eye was conceived especially for the National Museum in Brasilia, in 2013. It was an ephemeral intervention on the protected UNESCO building, which was designed and built in the frame of the general plan of the Brazilian capital. The hemisphere of the museum acted as a screen for a projection prepared by the artist which was shown during two evenings, the 6th and 7th December 2013.

The project stems from the personal experience of the artist, a mother whose daughter was born with eye cancer. The sequence of images used in the projection shows the breakdown of the tumour inside the eyeball. Rajkowska reveals what is invisible, diseased, rejected, but shows also the difficult process of fighting the disaease. Her work is a reflection on recognizing the world in conditions of limited sight, as well as on the biological and political function of seeing. Being implemented in the architectural embodiment of the modernist utopia, it raises the question of the rationale of the existence of an error.

The title of the work refers to the idea of the power of seeing, observation and control mechanisms. It can be read as a reference to the history of the place – the ideal city of a transparent urban tissue, built for the needs of the state apparatus. A gigantic image of an eye displayed on the dome of the museum building reminds one of invisible surveillance systems. At the same time it questions the role of the museum as an institution, whose mission is to preserve visual traces of history, and in doing so – to create its vision.

Six years later, Rajkowska decided to extend her inquiry into the phenomenon of error by editing footage from 2013 into a three-channel video which juxtaposes the concepts of an ideal city and a living organism. To be precise – the failure to materialize an ideal blueprint and failure of the body with a genetic mutation.

Diagnosis. Dr. Hautz, Children’s Health Centre, Warsaw, 1 March 2012, 7 am. After a sleepless night, I feel like powder, I have dry, heavy eyelids. The stress of uncertainty keeps me upright. Rosa, our 9-month-old girl, has spent the previous night wrapped in sensors, cables, tubes, connected to equipment measuring everything that can be measured. Andrew, Rosa’s dad, is grey.

The doctor had hoped that Rosa would not wake up, but now her little body fidgets convulsively, and Dr. Hautz looks into her eyeballs with his apparatus. If this was not terrifying, if we did not have use all our might to keep her tiny head still, it would look like a scene from Clockwork Orange. Nurses come and go, there are a lot of people in the room. Dr. Hautz turns around and says: “This is a bad disease. Eye cancer, bilateral retinoblastoma. ” Someone gives me a bottle of water and puts me on a sofa.

Rosa spent the first three years after diagnosis in many hospitals: first the Children’s Health Centre in Warsaw, then the Royal London Hospital and the Great Ormond Street Hospital in London. 6 cycles of chemotherapy, 5 operations: three laser and two freezing treatments for new tumours. Her eyes haven’t been removed. She can see. Doctors say that she most likely scans the image of reality. They also say that she sees as if she had two fists right in front of her eyes. But I think she just sees. And, maybe, somewhere in the middle of her head, a third eye is slowly emerging – not a parietal eye as lost in chordates, but a real, third, all-seeing eye that sees all that her eyes cannot see.

The view of a city from the satellite looks like an image of the interior of the body, the interior of the eye. Both the surface of our planet, and the back of the eye are examined using integrated digital image processing systems. We see three-dimensional structures, organs, tumours, growths, hernias. Above and below, systems, structures, cores, distortions and dysfuctions. Everything can be seen…

In ancient times, Chinese and Indian cities were built based on cosmo-magical models of the universe. In the Jesuit reductiones, the ideal cities of the New World, in Paraguay and Brazil, the Indian communities were subject to strict religious controls imposed by the monks. The city was to civilize, discipline and save. An ideal modernist city, thanks to its logic and functionality, was to introduce a utopian, rational order. Progress! The power of reason embodied in plans and blocks did not predict rebellion or chaos. It is not without reason that the Creator received the masonic name of the Great Architect.

Look: Brasilia – 5788 km2, 1050-1200 m above sea level. City plan: condor or plane. In the “cockpit” of the city are located government buildings, embassies and the presidential Palace of the Dawn. Not far is the National Museum – the white dome of Oskar Niemeyer, with its perfect, spherical curvature. An eyeball. It should be smooth, but when I get closer, it turns out that it is covered with lichen, it’s flaking, bits are breaking off, it’s getting mouldy, you can see cracks running across its surface like the venation of tissue. Moisture brings life into the concrete covering the dome. It ruptures it like the tumour that grew from Rosa’s fovea. After years of toil building Brasilia, the workers began to settle in the nearby hills. Many more people came here from the interior looking for a chance to survive. Slums formed. The slums began to be ruled by gangs. The level of violence became terrifying. My creation got out of control – said Oscar Niemeyer.

Look, this is the back of Rosa’s right eye, in which the retina did not cease to multiply its cells, and, wanting to see absolutely everything, outgrew itself. Yes, they managed to stop its frenetic growth, and the tumour turned into a dead star, trapped in the eyeball. That’s what people said when looking at the image of her eye on the dome of the Niemeyer Museum in Brasilia. They said – what a beautiful view of the cosmos… 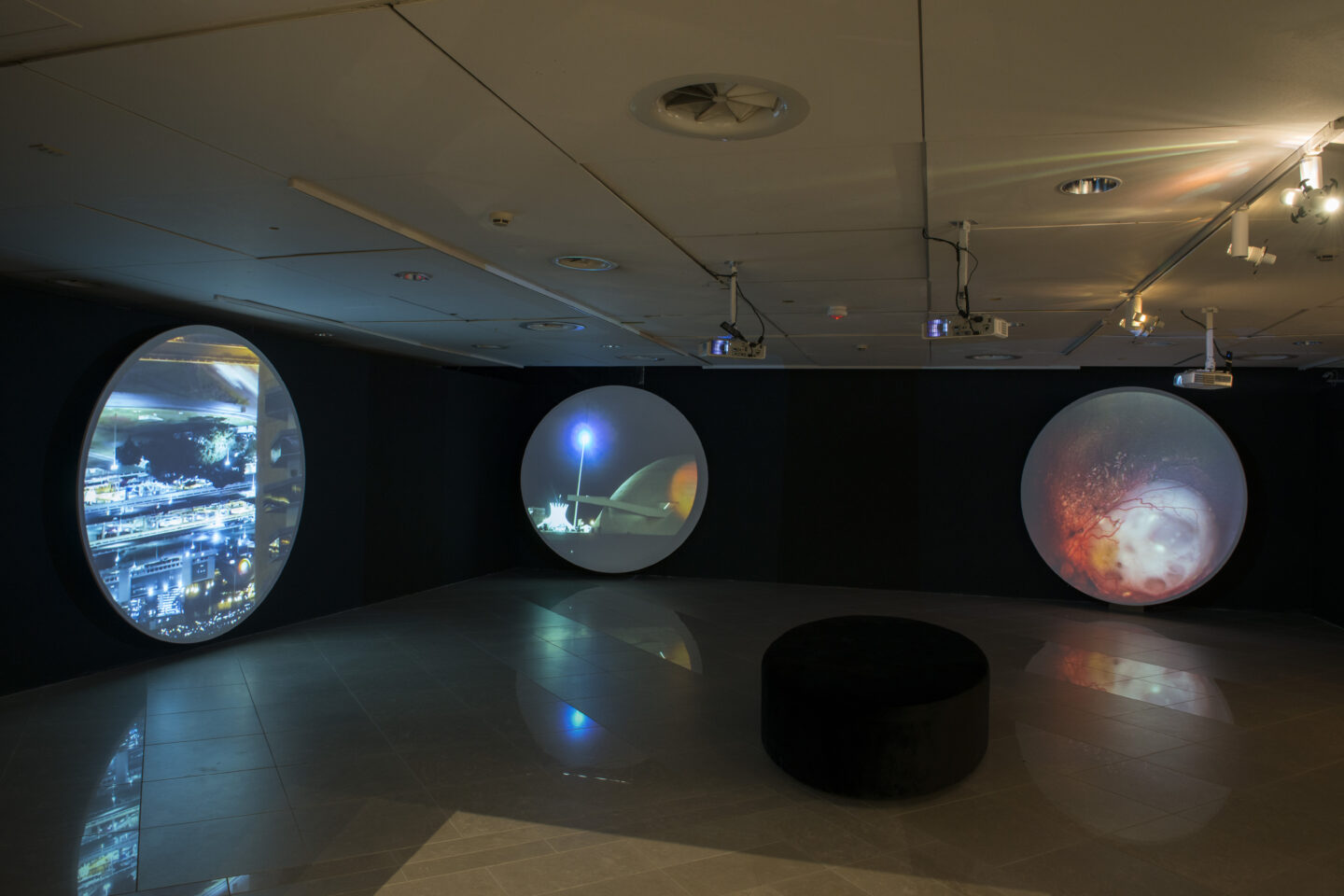 The Light of The Lodge. Edition Copenhagen
2012, public project