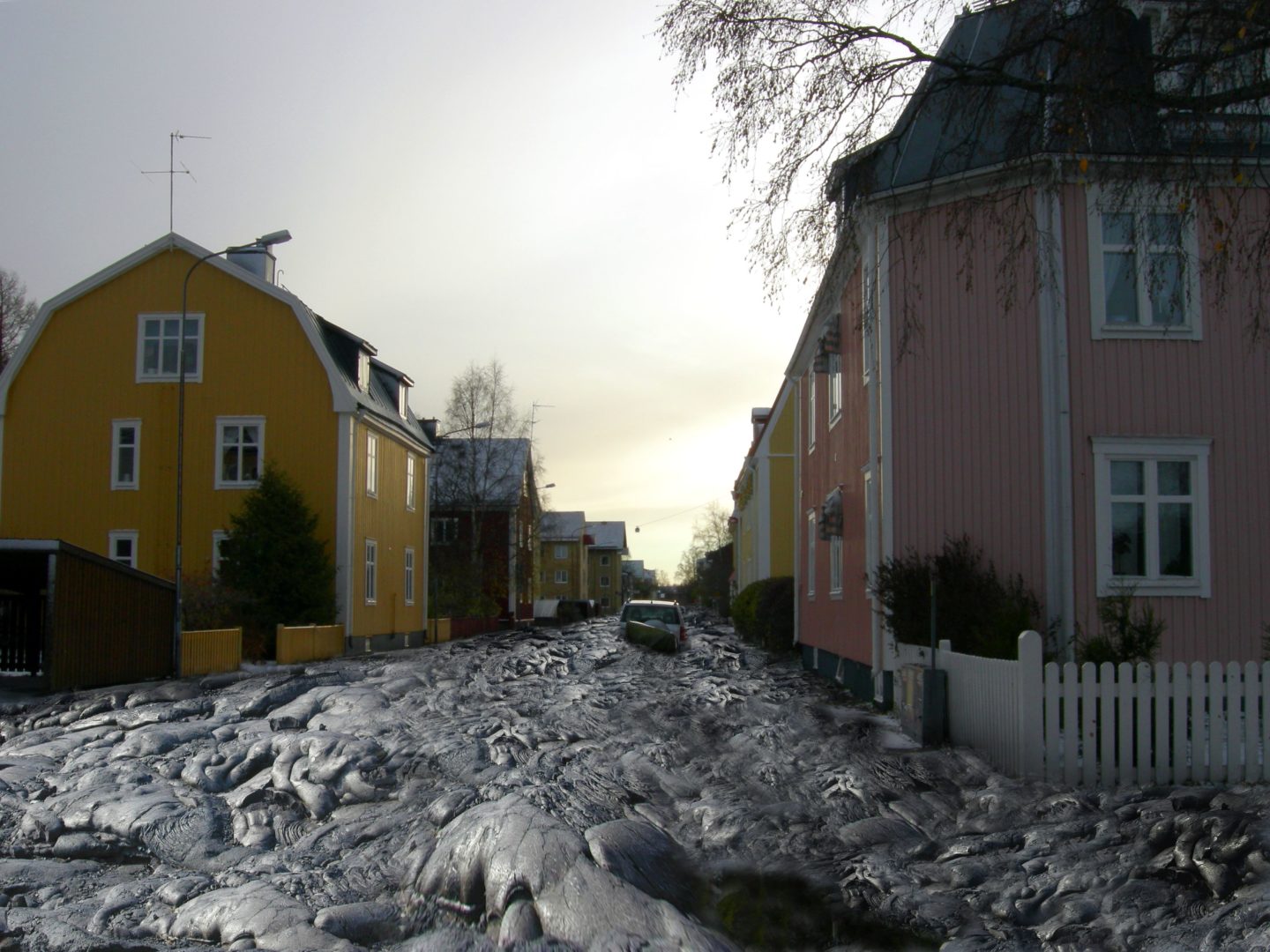 Every work of art is a monument, but there the monument is not something commemorating a past, it is a block of present sensations that owe their preservation only to themselves and that provide the event with the compound that celebrates it. The monument’s action is not memory but fabulation.

“People who sleep badly always appear more or less guilty. What do they do? They make night present,” John Seth writes. And he adds that those who sleep badly are unable to find one proper position, attachment, location[1]. The artistic practice of Joanna Rajkowska (born 1968), whose insomnia started soon after she placed a natural-size palm tree on a busy intersection in the centre of Warsaw, has a lot to do with this. In her search for such a place in public space the artist constantly opens new situations, provokes consecutive events. She makes the space of relationships and communication immediately present.

Warsaw, the intersection of Aleje Jerozolimskie [Jerusalem Avenue] and Nowy Świat [New World Street]. Near the former headquarters of the communist party’s central committee, the Polish Press Agency and the Warsaw Stock Exchange buildings there stands a palm tree (Greetings from Jerusalem Avenue, 2002). The seemingly innocent object triggered off a heated debate and for many years divided the public opinion of Warsaw, revealing an emotionally, politically, historically and symbolically charged and by no means neutral meaning of the name “Jerusalem Avenue.” And even though the palm tree eventually became a natural element of the city’s landscape, attracting the sympathy and interest of Varsovians and tourists alike, it still manifests a public space full of tension, antagonisms and lack of good will.

Warsaw, Plac Grzybowski [Grzybowski Square]. A strange place in the heart of Warsaw where multiple narratives and memories intersect, but never meet: the Jewish community offices, a synagogue, a bookstore in the basement of the All Saints church selling anti-Semitic literature, modern office buildings, a Deutsche Bank headquarters, small hardware stores, drab communist-era apartment blocks, winos, old ladies walking their dogs, Israeli high school students on a sightseeing trip in Poland. The square lacks any kind of a common reference point. Rajkowska’s project aims at filling this gap. It provides for setting up in the middle of the square a pond with water lilies, surrounded by shrubs and a lawn (Oxygenator, 2006-2007). The pond will be aerated and the bubbles of air coming to the surface will refresh the atmosphere and make being in this space more pleasant for everyone. Without pointing to anything or anyone, without mentioning the existing tensions, without confrontation.

Umeå, a small town in northern Sweden. A large volcano may be build near, if the artist’s vision is carried out (Umeå Volcano, 2006) – a symbol of the inhabitants’ fear of a major fire from the beginninig of the 20th century repeating itself, but also of a tension perceptible under the surface of orderly social relations. The decision that the object should be built and where was made by the town inhabitants themselves. A public meeting was convened at the artist’s initiative, from where the debate moved to the informal space of a dinner she organised for the interested parties. The original, formal, confrontation with the artist turned into an internal debate between the community members, revealing hidden emotions, aversions and differences of opinion. An imagined intervention in the town space manifested a space of relationships in which the people of Umeå can be present without the necessity of sustaining perfect public communication.

The few selected projects mentioned above show Rajkowska’s operating model, an intuitive method, far from conceptual control. The artist enters into a context and, using that context’s own codes, momentarily manifests spaces of physical and social relations. Seen in new light, the given space allows different people and narratives to coexist. Rajkowska’s projects are about displacing old meanings, noticing new cracks, sensing new vibrations.. The artist starts by entering a territory that is seemingly familiar and well defined. Without imposing any external interpretative categories, she triggers off a process of deterritorialisation, activating lines that make possible a reconfiguration. As Gilles Deleuze and Felix Guattari would say, she “dissolve[s] the identity of the place’, so that, ‘no one will recognise us any more when we come back.”[3].

This is made possible by a unique modality of Rajkowska’s actions. It can be understood by referring to Derrida’s notion of the “event.” An event, or something that was impossible to invent and yet it happened. Something that acts in the mode of “potentiality” and not of “maybe.” The artist initiates a process of the co-formulation of the space of the event by people within her reach.

At this point, it is worth quoting Bojana Pejic who, referring to public art, stresses the fundamental difference between “telling people what to think and enabling them – allowing them – to think.”[3] This highlights another element of Rajkowska’s practice. Her improvisational formula implies no control on her part over the processes. This, in turn, exposes her projects to the risk of failure. Like in the case of the volcano which is unlikely to be built due to the lack of agreement. Or like in the case of one of Rajkowska’s most important works, Maja Gordon Goes to Chorzów (2006) film[4] . Its protagonist and co-author returns to her home town in search for places, people and events she had known, but also for herself. Memory is to be a pretext here for consciously building one’s present identity. But, despite her frequently repeated willingness to subject herself to a process of vivisection, Maja Gordon reproduces only the usual masks and façades. She thus confirms that sometimes nothing happens even if one very much wants for something to happen.

The question, however, is whether failure is not just another version of a disruption that knocks us out of the state of apparent equilibrium and enables to see something new. If we do not sit in the world like in a comfortable chair but rather become together with it, to paraphrase Deleuze and Guattari, perhaps it is one of the better ways of working through this apparent discomfort to produce knowledge about oneself and the world? This is the direction in which Joanna Rajkowska’s art is heading. Rajkowska is an artist who places unique monuments in public space and relational space: monuments-events, objects-situations[5] . This is no longer an art that simply illustrates existing knowledge with other instruments. It is a unique, fully legitimate device of producing knowledge[6] necessary for becoming together with the contemporary world.

[4] Carried out as part of the artist’s recent exhibition Leave It, CCA Ujazdowski Castle Warsaw, At the Very Centre of Attention, 2006.

[6] This is discussed, after Irit Rogoff, by Marion von Osten in the essay “A Question of Attitude. Changing Methods, Shifting discourses, Producing Publics, Organizing Exhibitions,” in: In the Place…, p. 161.

Like a conductor who knows he can’t do much
2010, Joanna Rajkowska in conversation with Jakub Knera

From Umeå Volcano to Dear Departed
2013, An essay for the National Public Art Council’s annual catalogue