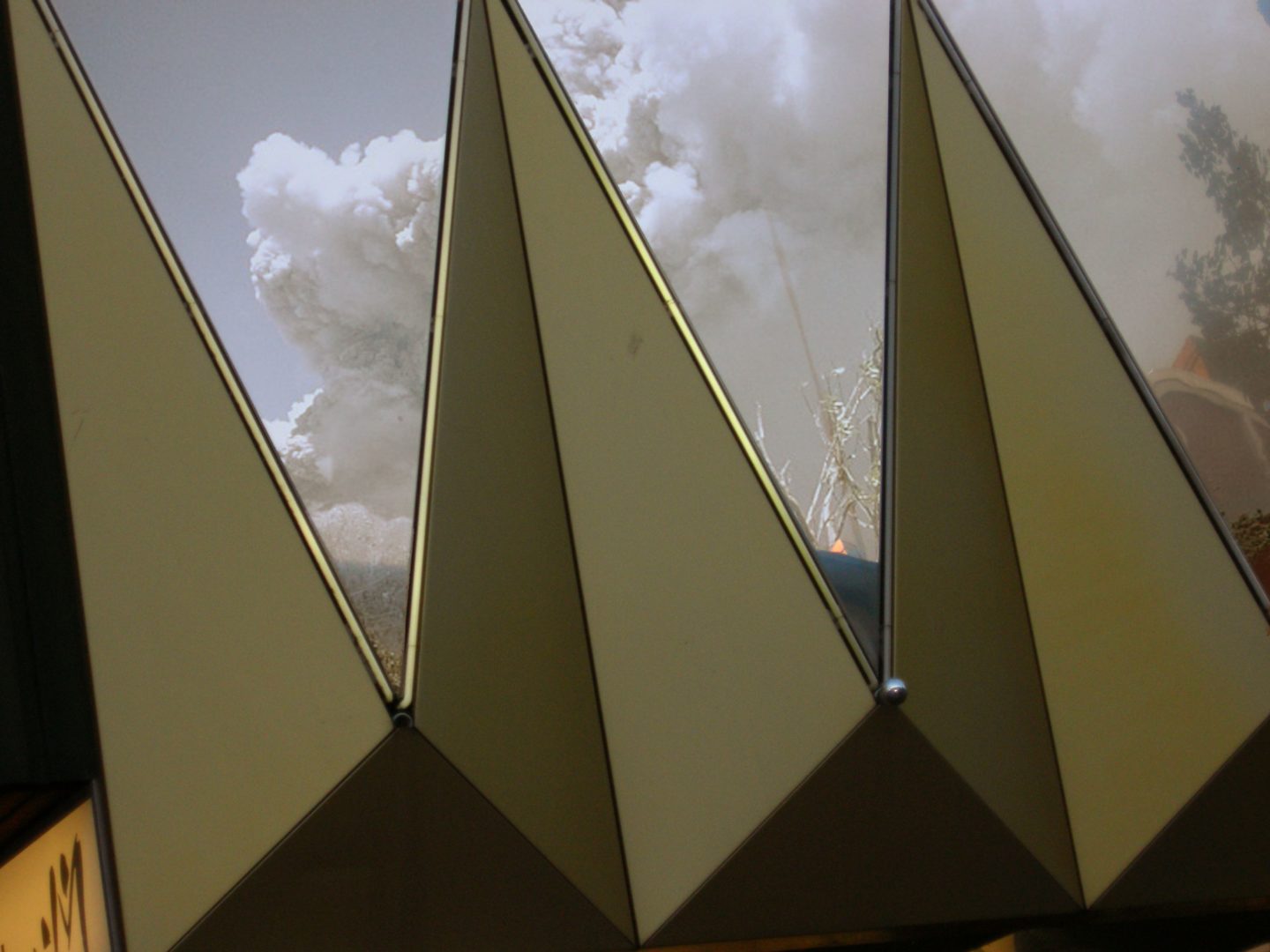 Sweden is the country of my three major public ‘dreams’: Umeå Volcano for Umeå, Carpet for Gothenburg and Dear Departed for Kalmar.

Umeå Volcano
The volcano was intended to begin a ‘new narrative’ for the city of Umeå, a narrative filled with exoticism and a desire to leave “the end of the world”, as its inhabitants call it, or, conversely, to bring the world nearer. It was the effect of my profound sympathy for this place, my dismay at the self-inflicted isolation of the people living there, and it was an attempt to manifest the tension generated by that isolation.
The Umeå Volcano would have created a place where people could meet for no special reason, away from home and public places where human behaviour is largely ritualized – like at the bar, the restaurant, or the cinema. It would be a place where the ways of relating to other people would have to be reinvented.
The project would have necessitated the construction of a 15-metre volcano-shaped mound on top of Hamrinsberget, a hill in the city. It would be built on steel supports arranged in a circle to form a cone. This would be covered with boards over which concrete would be poured to create a surface resembling solidified lava. Inside the construction there would be a large hearth with a chimney and an opening at the top serving as its outlet. Skylights with coloured panes would be set into the sides, and several irregularly placed openings would lead into the construction. Once inside, you would be able to sit on a comfortable bench and light a fire in the hearth using the wood stored there. The Umeå Volcano would become ‘active’ when someone inside decide to light a fire in the hearth – the construction would start emitting smoke.
Just before I left, I was invited for a dinner by Stefan Andersson, the owner of the major Umeå gallery. The owner of Hamrinsberget was also there and spoke to me for the first time. He approached me, shook my hand and said: “Have a good time in Sweden.” And then he left. The project was over.

Carpet
The Carpet project would have been a gigantic carpet for Götaplatsen, the major monumental square in Gothenburg. The carpet’s ‘fibres’ would be tall enough for people to get lost amongst them. Their structural basis – 2-metre-high polythene rods wrapped in wool to emit warmth and give a unique sensation of being inside the ‘fur’.
The terraces built around the square in the thirties enable people to look down at its main space so that the carpet, with a typical Oriental pattern, would be visible. I decided that its motif should be a dog, which signifies protection, trust and defence. Gothenburg is a mosaic of different cultures, as it has a sizeable immigrant population, typical for a multicultural city. About 20% are immigrants from Iraq and Iran. Carpet was designed to create a place where people could experience the warmth of Middle Eastern culture literally, beyond language and beyond any political discourse. It would also evoke the convoluted structure of Arabic cities, but juxtaposed with the plain, European design of Götaplatsen. Carpet was never brought to life due to administrative changes in the MAP (Mobile Art Production) Office.

Dear Departed
This obelisk, designed for the city of Kalmar, was based on a vision of waves endlessly breaking on the sculpture. I discovered that Kalmar was a city that people have abandoned throughout its history (the first mass exodus of Swedes to America set off by sea from Kalmar 300 years ago; people have been leaving ever since), so I decided to erect a sea monument for those who had departed.
There are four gorgeous obelisks in my home city, Warsaw. They surround the Palace of Culture and Science to commemorate Joseph Stalin. The palace and the obelisks arrived courtesy of the communists in the fifties. They mark a breaking point in the history of the city: a farewell to the pre-war Warsaw and the opening of a new era. My intention was to install a copy of one of these obelisks in the shallow sea surrounding the historic Kalmar castle, an iconic building for the city, the symbol of its medieval identity. The obelisk was to be a sign of a possible, but never experienced, historical discontinuity which, however painful, might have been a blessing for a city.
Designed as a memorial to all those people who left, migrated, departed, never came back – a memorial to unfulfilled wishes, alternative biographies and misplacement – the obelisk proposal also vanished as the Kalmar Museum, although they commissioned it, went no further.

The Palm Has Grown Bigger Than Me
2007, Wysokie Obcasy