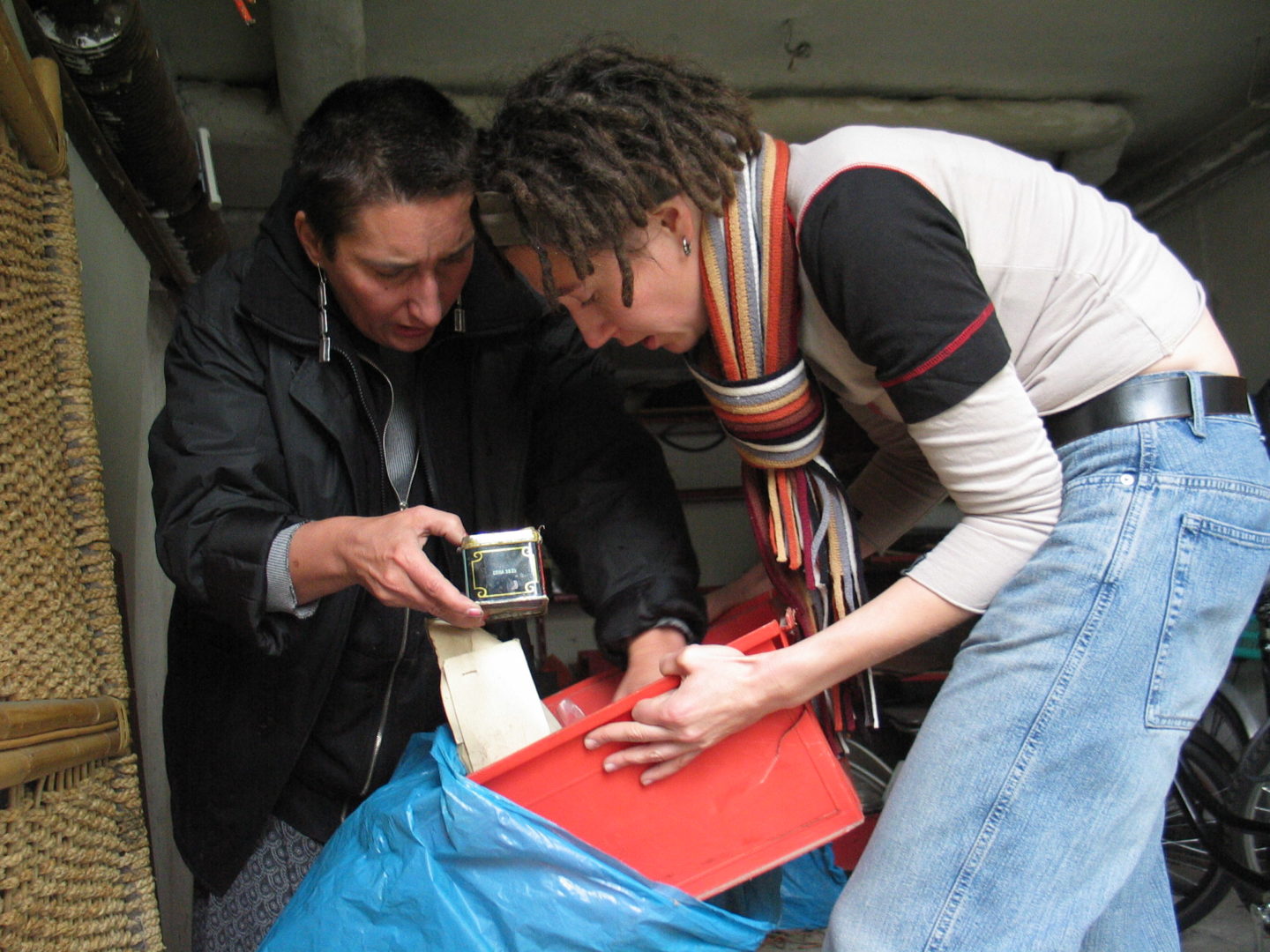 Alongside the preparations for the Lodz Biennale exhibition, postcards-leaflets were distributed in downtown Lodz, saying ‘Artist for hire’ and offering the free services of someone who will make a facial cast, take your dog out for a walk, bake an apple pie, or throw away a TV set you hate. What do all these ideas have in common?

The leaflet is a project that is carried out as part of the Biennale. It is a continuation of what I did last year in Berlin. I wanted to see how the project would work in different conditions, in another city – in Poland, in Lodz.

What do you expect from those people?

I don’t have any expectations. I don’t want to have any. It’s others who are supposed to come to me with their ideas. I myself remain in the background, assume a waiting attitude. Only when someone calls me or writes me or visits me and says, ‘Listen, I want you to do this or that for me’, only then do I begin to act.

The interested parties in a way get the artist involved with their own ideas.
Yes, it’s them who invent the project. This requires some creativity on their part, of course, and it’s quite risky, because it may turn out, as I was afraid it would in Lodz, that the city is too closed, people too paralysed to make the effort of contacting someone they don’t know.

How many responses did you get in Lodz?

I was contacted by eight people. Every meeting results in an extensive photographic documentation, which is very important for me. In Berlin, in exchange for what I did, I asked people for documentation. Those were not only photographs but also objects that people presented me with. Photographs, however, were most telling – the better they were, the better they worked. I thought in Lodz I needed a ‘professional outside eye’, someone who knows how to take photos and who thinks the whole thing is fun. I asked Kuba Dabrowski [editor’s note: photographer, graduate of the Prague Academy of Fine Arts] to document my stories, to tell ‘parallel’ stories with his pictures.

What is the essence of your art?
I think it’s meting people. Within the framework of a game, of course. Because it’s a game, and one with precise rules. I can do something for someone. I can do a lot, but I can’t answer someone’s questions about life, choices, values. Still, I spend a couple of hours with that person and all kinds of things happen. This being together, without attempting to understand the other person in any way, without going into the details of their life, this pure and simple being together, is, I guess, the most important thing in all this.

Aren’t people afraid to join this kind of game?
They are. It’s difficult to join it. They expect you to either receive them with open arms, be ‘cosy’, comprehensible and transparent, or to remain a stranger.

In which part of the Biennale are you featured?
In the international one.

What did you want to show and what is the purpose of this part of the exhibition?
I wanted to present a project that would have its history and its present. On the one hand, it’ll be a slideshow, images of what happened in Berlin in 2003, arranged into stories and accompanied by text. The Lodz stories are told using a large number of 15×21 cm photographs. There are brief descriptions of the meetings. Here, text and image are presented separately.


When and where did the idea of this project originate?
When precisely? You never know that. I know it was July 2003, I was in Warsaw, thinking about a project for the Mullerdechiara gallery, cycling to work, and suddenly I thought I didn’t feel like offering anything to anyone, that I preferred to ask people what they wanted from me. And I took the idea to Berlin.

The common notion is that art is something for artists, critics and connoisseurs. Is introducing contemporary art to the ordinary man in the street an easy thing?

I don’t want to introduce anything to anyone. I myself operate at the fringes of contemporary art, at the margins of the area that is conventionally referred to as art and whose boundaries keep evolving. Projects such as Artist For Rent probably redefine small fragments of this area.

I respect a certain state of mind, a kind of tension, a special kind of attitude towards reality. Photographs, sculptures or films only communicate this tension. What really matters is the energy that causes you to want to remain alert, to touch reality in an ‘alert’ way.

And where did the idea itself come from?
On the one hand, from withdrawal, an unwillingness to propose anything, and on the other, from the need of human contact. There have already been projects like this one, though they were aimed at a narrower target and were less risky.

Whom or what do you usually present in your works?
Each time I am confronted with a world I don’t know, so the context of that world, the person making the request, and their story – those are the elements that constitute the project. I am a tool that others can use, but also the narrator telling a story about them.

What is the project’s regional scope?
Berlin and Lodz.

Where else do you want to repeat it?
I think Lodz is the last stop. My energy and curiosity are becoming exhausted, and forcing yourself to do something just doesn’t make sense.

If the project is becoming exhausted, what are your plans for the future?
I don’t want to be starting anything new in the near future, I feel I’m on the verge of burnout. I’ve done quite a lot this year and I think I should concentrate now on editing the material, which is tedious and hard work. Perhaps I’ll make one more film, another one is being made now. I have to finish Artist For Rent, which will likely take me another month…

Is the nature of your works influenced by their location?
Definitely so. It is the starting point. The palm tree on Aleje Jerozolimskie in Warsaw or the Belgrade project Cruising Around War Island came into existence because of the specific place, its history.

What makes you happiest in your work?
It is meeting people, playing a sort of game with them. Certain things start looking possible, I see them in different light. Perhaps it also happens to the other side.

You suddenly receive glasses that completely change the way you see the world and it turns out things are not as you thought they were. Suddenly everything comes to you and becomes obvious. It’s beautiful.

This interview was conducted by Mateusz Pielas and Lukasz Mikolajczyk

Joanna Rajkowska: graduate of the Academy of Fine Arts in Cracow and the Jagiellonian University. Lives in Warsaw.

Rajkowska: A Political Critique Guide
2009, A mini-narrative about art and politics

Art on the Edge — Joanna Rajkowska