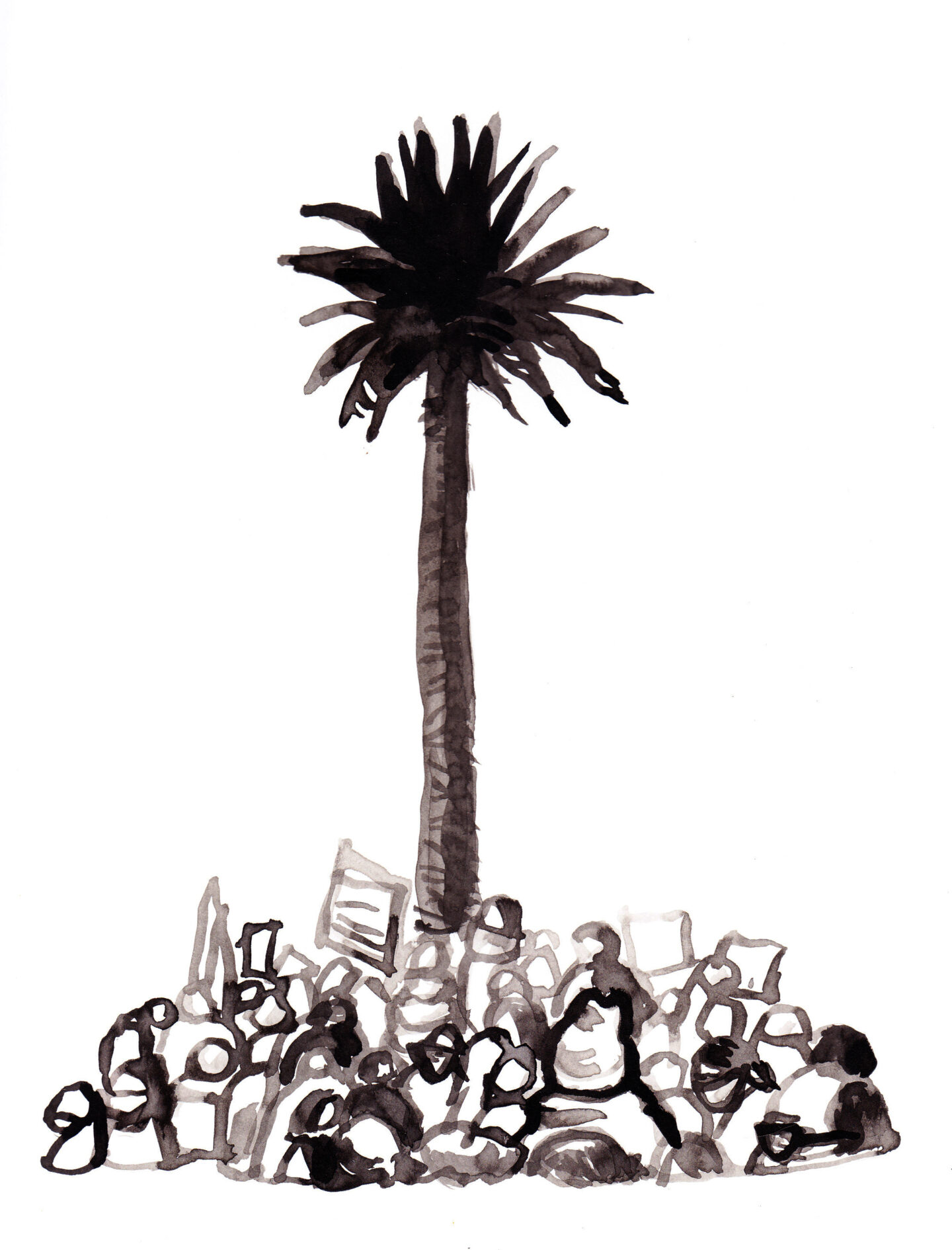 Dear Beings, I hope you are feeling well and have something to breathe.
I am standing here, still, it might seem, but delicately swaying to and fro, observing. I see all and forget nothing.
I am 18 years old, which in the human dimension means maturity. But plants have a different sense of time. A date palm can survive up to 150 years in good health.
In the case of a palm made from steel (my core!) and plastics, you can freely multiply this result by ten or a hundred…
I woke this morning before the first tram passed through the roundabout. I was tormented by nightmares. All of Warsaw in flames, explosions and smoke. Pandemonium. I prefer dates and the blue sky.
I’m 18. It’s my special day. You can’t be a star every day, so I decided to make a little speech. My oratorical ambitions may suffer due to my lack of vocal cords, so I decided to compose a little letter to you.
So, on to the matter at hand.

I, a fake tree, am speaking up because I am beginning to worry. I’m not worried for myself, because I know I have a move in store. I’m afraid for you, my friends. I observe what you do. I root for you. If there were a fan club for Homo sapiens, I would join in a heartbeat. I really like you, small creatures who love to gather, wander and shout, so much energy. You cheer me up. I never get tired of you. OK, some of you I like better than others. I’m sensitive to social harm, to put it mildly, so it would be hard to lead me astray—I know who to sympathize with and who to trip up with my roots. But let’s put aside old animosities.

So listen, even though I know I sound like a rotten old stick-in-the-mud: Our planet is boiling! I know, I can see you stopping up your ears. Everyone’s saying it: There’s no snow, the bees are dying off, the glaciers are melting, methane is seeping out of the permafrost. It’s all bad. Most of the adults of your species don’t want to hear about it. Because now they have problems of their own. They think they’ll deal with it later. But I’m here to tell you: There won’t be any “later.” I’m counting on you, my peers—in you I place my hopes as a tree.

Enough of mining the earth, emitting carbon dioxide into the atmosphere, clearcutting the forest, devouring the animals. It’s no joke. You really need to mobilize, and immediately change the way you produce food and exploit the resources of the planet. You need to completely rearrange your relationship with other beings. Apologizing to the wild boars would be a good start. Stop wearing the furs of your fellow creatures. Give the hamsters a break. You call other beings vermin and weeds! That makes no sense! I’m also afraid that—I know how hard it is to imagine—you must come to terms with what you call capitalism and its greed. It’s just hurting you. At this point it would probably be better to smoke cigarettes. There’s also something called the patriarchy. In the trash heap, no delay! Patriotism? Yes, but only planetary!

If you only felt the plant scale of time, you would understand that your thoughts should not race into the future to the next sales season, as the corporations do, but think of the future of living organisms and their chances for survival. Just think, tens of millions of years ago palm trees grew in Poland! My grandmothers and great-grandmothers lived in the Oligocene epoch, and they were thriving when you all were still squatting in caves! Do you think about how your descendants will manage in, say, a few hundred years? In what air, what water, what temperature? All of this is just as important for people as it is for palm trees!

Do what you should, and you will thank me for my advice. You have a while until the upcoming holidays. I know what a tough year it has been for you, so finish it off with a bang! 2020 is dead, long live the Era of the Interspecies Community! Roll up your sleeves and get to work—otherwise you will lose the chance for survival. I’m telling you this, a creature of steel and plastic who will outlive you all. Enough of extinction! I swear on my leaves, live and let everyone and everything live!

I know I’m wising off, but becoming an adult is more than festive parties. It also means discovering who you are and what you want. I think, I feel, I decide. And I warn you, dear beings, it’s the last chance to take matters in your own hands and save the home you live in. Your house is burning. And I would really like to see you again in 50 years, 150 years. I want to see you gather in the streets, chanting and dancing. Dogs don’t do that, pigeons don’t do that, and neither do date palms. You are truly exceptional. It would be a shame to lose that. You give me joy. I feed on your warmth, your anger and your love. Come on people, haven’t you had it pretty good over the last five thousand years? In a stable climate, with varied seasons of the year, with snow on the streets of the Old Town? Are you tired of the Holocene epoch? Do you want all of this to go up in smoke? As my young friends striking for the planet say, “There will be nothing on a dead planet.” So there won’t be any Warsaw either. There won’t be roundabouts and streets, there won’t be buildings. Or trees. No, there won’t be any cats or hamsters. And no coffee.

That’s all from my side. If you want to chat with your tree about what’s bothering you, don’t hesitate. Send me a letter, I’ll read it only on paper. Send your messages to the Museum of Modern Art in Warsaw. I have my own address (palma@artmuseum.pl). They will print it for me to read. I’ll write back, although it might take a ridiculously long time by your human standards.

But I promise you that my answer will be carefully thought-out and to the point. And I suspect that my insight will knock you off your feet.

Keep warm, and watch out for tornadoes, hurricanes and the spitefulness of the Angel of History!

For ever and ever,
Your Palm

Words of the palm tree transcribed by: Joanna Rajkowska and Sebastian Cichocki

A letter from Palm (video)