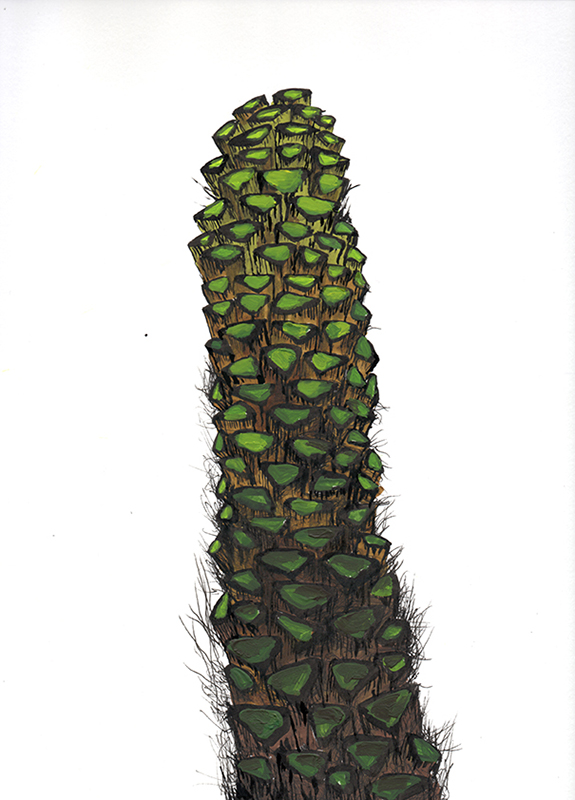 As the third correspondent for Love Letters, Astrid Korporaal and Basia Śliwinska invited Joanna Rajkowska. Support the All-Poland Women’s strike by purchasing the editions, and the artists through their works (by emailing info@almanacprojects.com).

On December 12th 2020 a palm tree in the Charles de Gaulle roundabout on Jerusalem Avenue in Warsaw, Joanna Rajkowska’s public project Greetings from Jerusalem Avenue (2002), celebrated her 18th birthday. The identity card required for every Polish citizen 18 years of age or older was issued for her by the Museum of Modern Art in Warsaw in recognition of her belonging to the local community. In 2002 the 15-metre artificial date palm tree was installed in the centre of Warsaw after Rajkowska’s trip to Israel during the second Intifada. A social experiment testing urban social space and its openness to otherness, the tree also recalls of the Jewish community inhabiting Warsaw until the Holocaust. The project visibilises the limits of memory and imagination. Which stories remain untold? Whose bodies are considered disposable? An opening of The Palm House with paraphernalia including evocative objects and materialised memories mapping the first eighteen years of the project marked the anniversary. One of these objects is a letter from the Palm (transcribed by Sebastian Cichocki and the artist in 2020), which starts ‘Dear Beings, I hope you are feeling well and have something to breathe.’ The tree is seriously worried, ‘Our planet is boiling!’, ‘Enough of mining the earth, emitting carbon dioxide into the atmosphere, clearcutting the forest, devouring the animals. It’s no joke.’ The letter is a call of crisis manifested by detrimental human activity visibilising genealogies of destruction and human parasitical infestation, the intensification of extractive capitalism and continuous and violent exhaustion of natural resources driven by greed. Anna Lowenhaupt Tsing in her article ‘Earth Stalked by Man’ (2016) refers to current global conditions as the ‘patchy Anthropocene’ characterising the global system in which accumulation of wealth produces patches of liveability and death. Similarly to the Palm, Lowenhaupt Tsing writes about patriarchal conditioning centered on the Eurocentric figure of Man. It is not only suggestive of a falsely universalised foundation but also not holding those responsible who are culpable of the ecological exhaustion. Though the Palm Tree offers some consolation: ‘in you I place my hopes as a tree.’ 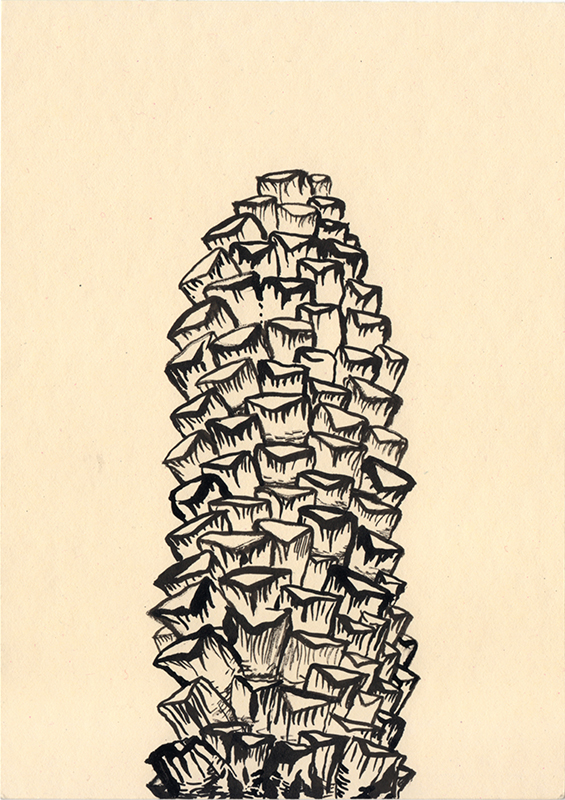 Since her conception the Palm Tree has become an important spatial marker embodying multiple protests and a symbol in the struggle against rising right-wing ethno-nationalist anti-democratic narratives, anti-gender, homophobic, racist and misogynist initiatives and anthropogenic environmental catastrophe. She triggered collective and individual actions, including demonstrations in support of womxn’s rights violated by the Polish government which continuously assaults bodily autonomy of Polish citizens. The Palm Tree is thankful: 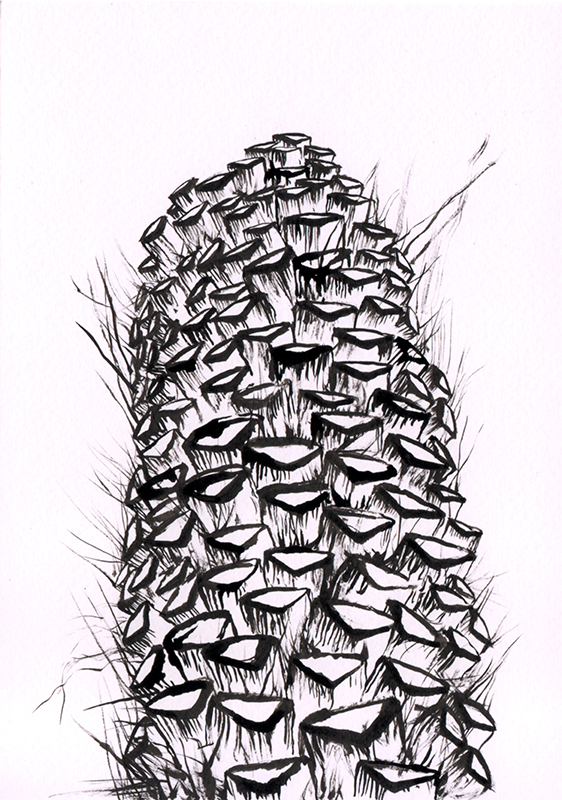 The Palm Tree speaks across species and relational spaces, critiquing the uneven Anthropocene and the sickening disregard for planetary abuse and disrespect towards the ecosystem consumed as disposable. Perhaps her letter marks a symbolic gesture imagining Donna Haraway’s (Staying with the Trouble: Making Kin in the Chthulucene, 2016) notion of the Chthulucene, which proposes ‘tentacular thinking’, thinking-with and grieving-with to cultivate a practice of response-ability. The term refers to the chthonic inhabiting, metaphorically or literally, the subterranean. She imagines alternative formations that do care for not selected but all lives, human and nonhuman. The Palm Tree takes note of the entangled relations that if ‘we’ -as humans and nonhumans- are to survive, ‘we’ need to be response-able and relationally situated within worldings. She has become a protagonist in the struggle against violence to all bodies, whether this concerns bodies of harvested trees or womxn. The Palm Tree calls for a reconfiguration of thought to animate relational ethics of care for all living organisms and their vulnerable bodies. ‘We’ must be accountable for cultivating multi-species justice against globalised neoliberal capitalist hegemonic models of thought realising the Western project of colonisation of the planet. The Palm manifests Haraway’s appeal to a becoming-with, in which entities emerge from sympoetic encounters and making-with of kinships for collaborative survival, insisting on a present that practises attention to the future and to historicity. Sniderman, in the text ‘A Disruptive desire to be there where it stands’ (2020), writes that the Palm is ‘a welcoming symbol, a demand even, a vision, for an intra-racial and -cultural Poland, for repair, refuge, tolerance, commonism in difference, humanness in dissensus, and global justice—made possible by the cessation it creates in urban life.’ 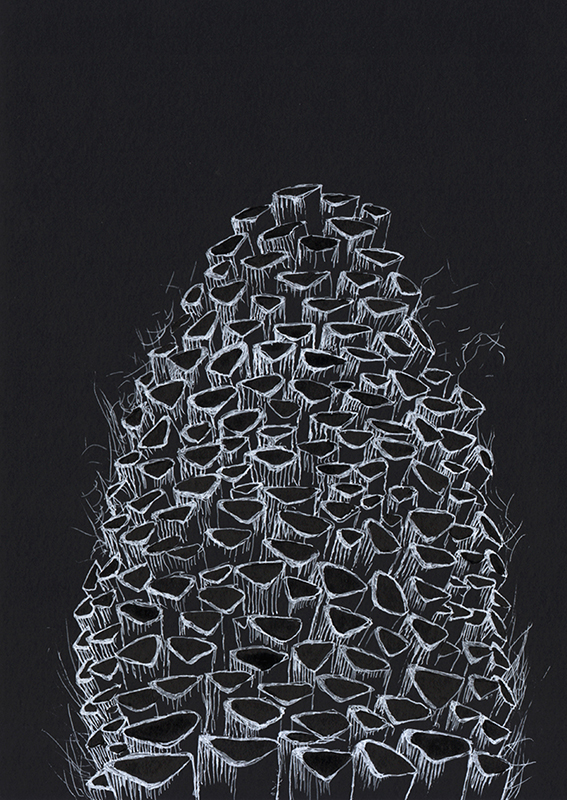 For Love Letter #3 Joanna Rajkowska has created a series of drawings of the cut down palm tree. Palm trees are monocotyledon plants, which means that once their top, the ever flowering bud, has been cut off, they will never grow new fronds. Silvia Federici in the book Caliban and the Witch: Women, The Body and Primitive Accumulation (2004) interrogates the capitalist destruction to the environment and explores the transformative potential of an anti-capitalist commons. Engaging with knowledges and solidarities of women whose practices activate healing via plants and herbs, she visibilises ways in which these have not been accommodated within capitalist organisation of labour dependent on the subjugation of women, enslavement and exploitation. Rajkowska’s Palm is a testament to joy and anger, similar to the women’s protests in Poland which were brutally cut off by the police. Is there a possibility for rebirth? Sniderman suggests that, ‘Rajkowska’s public practice over the last nearly twenty years, which she accounts begins with Greetings, mobilizes an admittedly primal and aurally compromised attention-to, sensing-with, making-with, and living-with the monstrous world.’ The Palm Tree is an inviting gesture to welcoming vulnerabilities and interconnected and interdependent human and nonhuman entanglements so no bodies are disposable and all ‘have something to breathe.’ 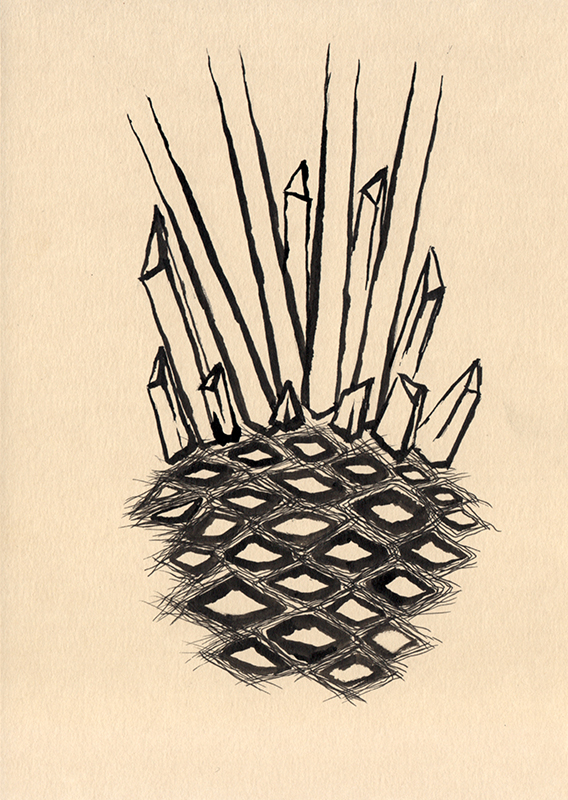 In the works Rajkowska shares with us, there is an emphasis on the trunk of the Palm, her central body. The graphic structure of the trunk emphasises her scarred nature: palms have skin rather than bark, the patterns made of hardened cells left behind after fronds are shed. The trunks show us violence as well as survival. These bodies carry with them lives experienced, lives released, and lives cut off. And they are alive below the surface as well, through hundreds of slender roots that continue to connect to the ground of life. The image of a leafy palm holds associations with luxury, fertility, and island paradises. At the same time, palms are amongst the most cultivated trees on the planet, and this planet is being scarred by the extraction of their oils and the harvesting of their hearts. Perhaps the Palm Tree’s branches were cut to celebrate the human victory over the earth. Or perhaps life has turned its attention elsewhere, underground, to nurture different kinds of relations. Trunk, bark, and root; bone, skin, and hair – these bodies carry other bodies within them. The subterranean world of the imagination might not be visible, but we are always tied to it through delicate strands of possibility. 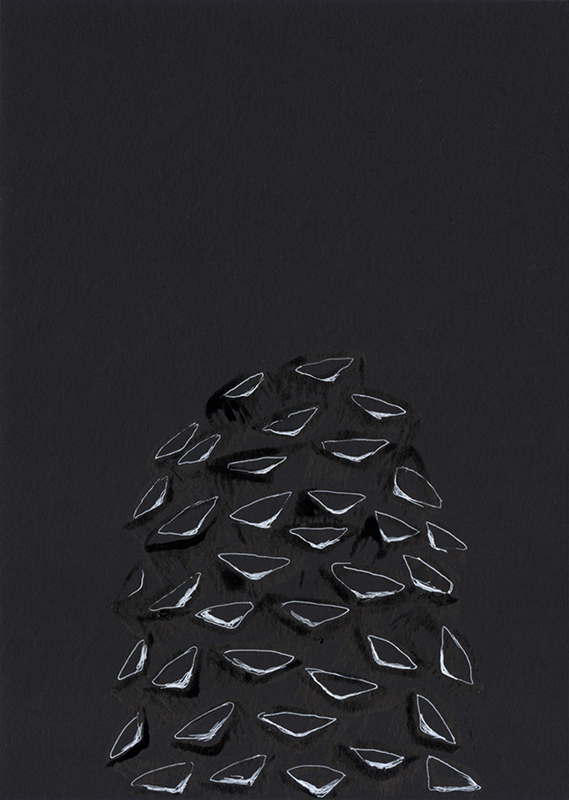