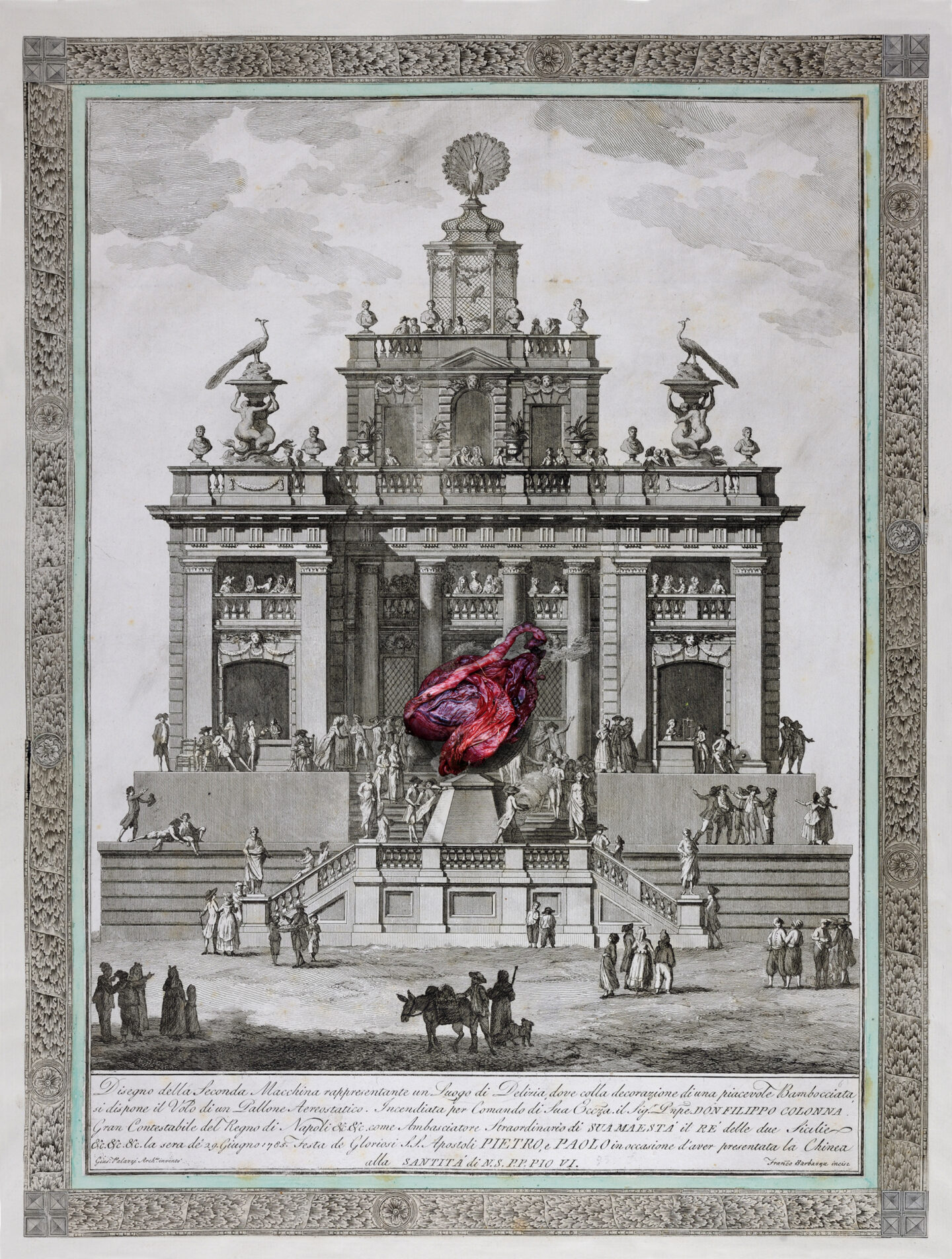 Place of Delight was designed for the exhibition What Is Enlightenment? 200 years of the Print Room of the University of Warsaw Library at the Museum of Modern Art in 2018. The exhibition was conceived as a dialogue between the Age of Reason and today’s world, between the prints and drawings from the collections of King Stanisław August Poniatowski and their interpretations by contemporary artists.

The photomontage Place of Delight is another work in which Joanna Rajkowska conducts a dialogue between the past and the present, exploring the role of the Enlightenment in the process of leading European societies out of the world of myth and superstition towards the liberating splendour of reason, and finally to the contemporary disintegration of the illusions of Western civilization about progress, security, equality and tolerance. The work consists of a reproduction of the etching A Place of Delight with an Aerial Balloon created by Francesco Barbazza for the Chinea ceremony in 1785, in which Rajkowska has incorporated a photograph of her own placenta, thereby creating a kind of monument to the temporary mammalian organ that connects the foetus and the mother. Inserting a fragment of the female body into a world created by men is a definitive departure from the idea of mathematical creation, replacing clean geometry with messy non-geometric female body parts. Barbazza’s illustration comes from the collection of King Stanisław August Poniatowski, himself a Polish Freemason. Now in the Cabinet of Prints of the University of Warsaw Library the collection also contains other works representing events important in the context of the modernization of Poland, as well as works related to contemporary political and cultural events. The artwork chosen by Rajkowska is one of numerous representations of projects of temporary architectural forms erected every year in Rome from the middle of the 16th century for Chinea, a yearly ceremony in which the Kings of Naples paid tribute to the Pope. The tradition ceased in the mid-nineteenth century, when the King of Sicily financed the erection of the Column of the Immaculate Conception in Piazza di Spagna, near the famous Spanish Steps.

The title is a quote from the caption embedded in the drawing:

in translation: “The print shows a device for a fireworks show. The shape of the machine represents a place of delight * in which, in the decoration of a pleasant bambocciata*, the flight of an aerostatic balloon was arranged under the command of His Grace Prince Don Filippo Colonna, as the Ambassador of His Majesty the King of Naples and Sicily, in the evening June 29, 1785 on the Feast of the Most Holy Apostles Peter and Paul on the occasion of the annual tribute * to Pope Pius VI. Giulio Palazzi
the architect invented Franco Barbazza engraved
* Place of Pleasure (Luogo di Delizia) – also a country estate, villa, country house
* bambocciata – painting genre scenes
* Chinea – annual tribute (donation of a horse and money to the Pope for the capture of Naples https://en.wikipedia.org/wiki/Chinea

The work, not shown at the exhibition, it was produced two years later and took part in an auction organized by the MSN for the Ocalenie foundation in 2020. 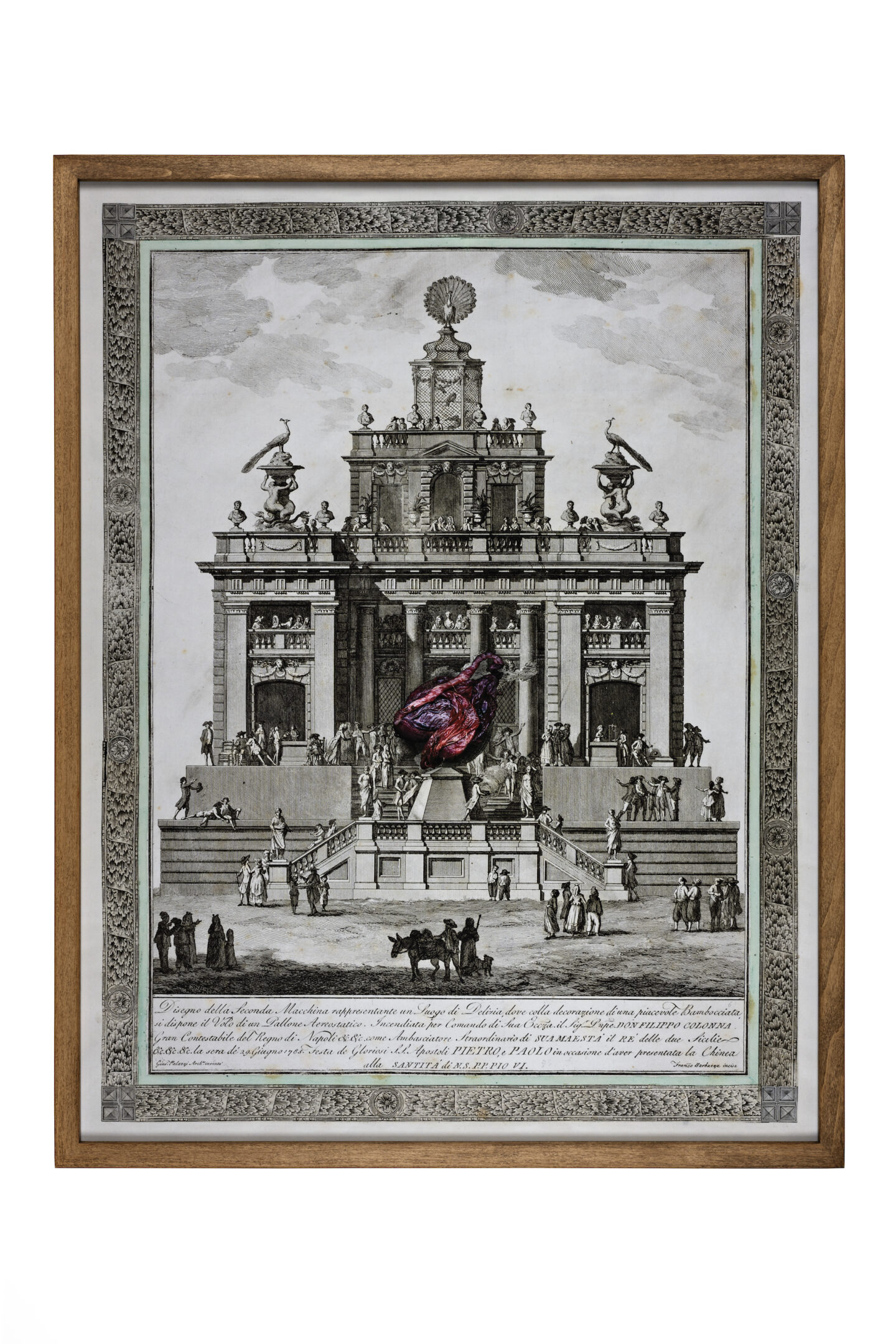