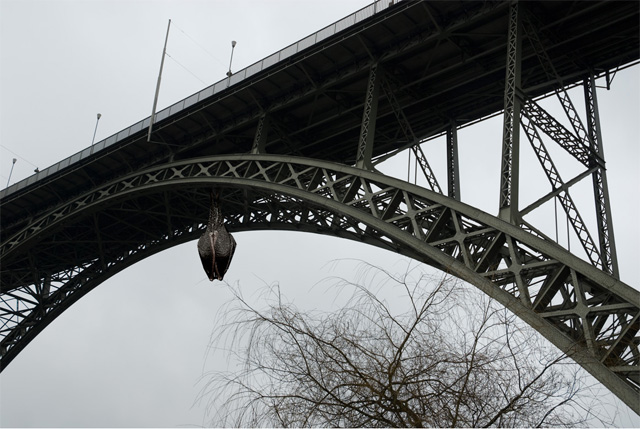 Designed for the city of Bern, the capital of Switzerland, The Bat is not so much a sculpture as a container for human ashes. It is therefore an alternative cemetery, a burial place, a memory site, and an ultimate meeting place.

The form of this container can be naturalistic or abstract, whereas the starting shape should be that of a sleeping bat, hanging head down, wrapped up in its wings; a kind of biological form, rhythmised with the scaffolding of the wings. The residents of Bern would be presented with several formal propositions to choose from. The bat figure should be three metres long and suspended under a span of the Kornhausbrücke, one of Bern’s most beautiful bridges. The massive structure is 382 metres long and 115 metres high. It was constructed by Paul Simmons, a Bern-based engineer, and the company Theodor Bell & Cie. It was ceremonially opened on 18 June 1898. The bridge has seen many suicides, which is why it is sometimes called Selbstmordbrücke – ‘Suicide Bridge’. The sculpture would thus become a place, a final, ultimate resting place. People could have their ashes stored here, albeit on one condition – that they would not be placed in separate containers but mixed together. Thus people who did not know each other in their lifetime would be buried together, in absolute physical closeness.

B.E.: What is The Bat project really about?
J.R.: Under the Kornhausbrücke hangs the figure of a bat that is asleep or in hibernation. It is made of artificial stone and is three metres long. The sculpture is hollow and has a special opening in the upper part, a kind of shelf, which can be tightly closed. The bat is a place rather than an object. In fact, it is a suspended cemetery, a place where everyone can be buried, if he or she desires so. There is only one condition – the ashes cannot be separated from each other, cannot be placed in urns.
B.E.: Why have you come up with this project for Bern? Your sculpture is to be a container for human ashes. Whence the idea?
J.R.: At the beginning of my residence I tried to create my own image of the place, an image that would contain all the possible characteristics of the Bern (and Swiss) community. I realized that it had to be an animal, not a domestic one but a wild one. The Kornhausbrücke is sometimes called ‘Suicide Bridge’, because many people ended their lives jumping off it, so it is place associated with death. On the other hand, two years after my mother’s death, I have still been unable to cope with the fact. I brought the problem here, to Bern. And a mother is not only a person, it is also a place… Finally, I think that Switzerland, Bern, are a kind of model of Europe, a model of a cultural phenomenon, with all its distinguishing features taken to extremity. It is the only country that I know where it is legal to bury human ashes in the natural environment, not necessarily in a cemetery. So why not bury them in a work of art? For many, art is a substitute of religion…
B.E.: What does the bat symbolise for you?
J.R.: It is what it is – a cemetery. It symbolises nothing. It is a place, a heterotopia. Just like death, the bat is something unfamiliar, incomprehensible, fearful. For me, an absolutely fundamental thing is the condition that the ashes have to be mixed together. Full physical contact of the bodies – ashes. Not everyone is prepared for that, though.
B.E.: Do you want simply to provoke or do you think the project is actually viable?
J.R.: It is certainly possible from the legal point of view. I think it is a matter of understanding, collaboration and good will from some Swiss artistic institution and companies offering alternative burials. I think Swiss society is a highly mature society and prepared to make this kind of risky decision.
Translated by Marcin Wawrzyńczak