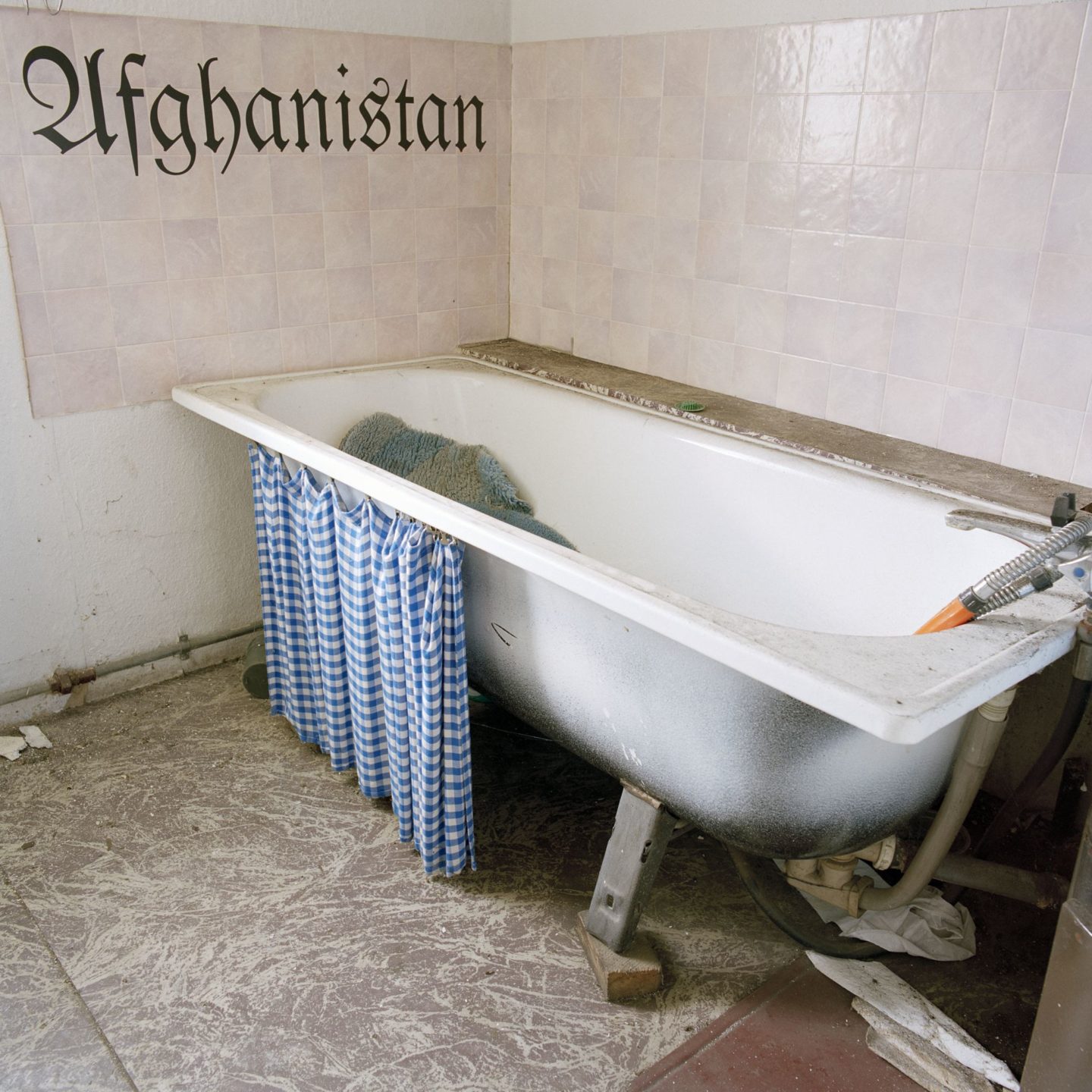 A woman in a dress lies on the pavement. Two men are heading towards her – a young one and an old one, the latter raising his cane in an angry gesture. Everyone knows this picture, which can be found in Trembling Bodies, a collection of interviews with artists, where it illustrates a conversation with Joanna Rajkowska. ‘Performance, Mea Shearim, 2001′, the caption under the photograph in the exhibition says. The performance took place in Jerusalem, in a neighbourhood that is a stronghold of orthodox Jews.

The protagonist and author of this performative gesture is an oriented artist – for the initiator of the Oxygenator, the East, or, more precisely, the Middle East, has become a region towards which her practice obviously leans. At the same time, it seems to be one of the crucial points of reference on Rajkowska’s geographical and mental map: ‘For me, Israel has become an image of the world in general. Values turned against themselves. Racism. A religious pulp’.[i] Viewed from the safe European perspective, the political, historical, social, religious and ideological lines of tension that has proved impossible to relieve for sixty years now appear as a tangle whose different strands are hard to discern. A physical, material, direct confrontation with the Israeli-Palestinian reality is inevitably dazzling, paralysing. That is at least the message you get when engaging with Rajkowska’s exhibition Camping at the Kronika in Bytom.

‘If anything is to change on this planet, we must make a stand’, Rajkowska states in a polemical article in Gazeta Wyborcza.[ii] The hitherto practice of the author of Greetings from Jerusalem Avenue shows that participation, presence, reaction to a space that, when confronted, causes communication processes to be externalised, revealed, shape the given community’s interpersonal relationships. Rajkowska introduces an artistic gesture into a fragment of space which, as a result of the visual accents being shifted, like with the palm tree in Warsaw, starts to function as a splinter in the viewer’s eye. By irritating a wound, she causes the underlying trauma to manifest itself, though the gesture is hardly aimed at achieving an obvious success, an ultimate healing.

In Camping, the isolated space serving as a micro-scale image of the world is the Jenin Refugee Camp in the West Bank. The camp is a physically sectioned off, enclosed space. The way its inhabitants communicate with each other and with people outside the camp has been shaped by a long-lasting military conflict. This communication is based on a simple, useful in daily life, differentiation between ‘here’ and ‘there’, us and them. The Enemy beyond the fence is a homogenous and monolithic entity, eternal and archetypical in a way.

The artist entered a space so structured in April 2008 to participate in a workshop for a group of Palestinian teenagers known as the Bad Boys. The film Camping Jenin (2008) documents this workshop, which took place under the auspices of the Freedom Theater, reactivated by Juliano Mer Khamis, author of the film Arna’s Children (2003), also shown at the Kronika. The film is about Khamis’s mother, Arna Mer Khamis, a Jewish woman who became a champion of Palestinian rights in the occupied territories. Arna married a Palestinian, but above all she initiated a kind of healing process by founding The Stone Theater, where Palestinian children had a chance to become aware of and communicate their emotions other than through hopeless, uncontrolled anger. This kind of project can easily be dismissed as idealistic, naïve in its belief in art’s therapeutic potential. The film incorporates a number of different time frames – images of kids participating in the workshop are interwoven with scenes showing the same kids, now several years older, remembering their theatre experiences and their work with Arna. They all say that ‘strange Jewess’ was like their own mother to them, or even closer. Another temporal frame is the recent past – dressed in combat fatigues, the workshop’s participants confirm for the camera their readiness to fight for Palestine’s liberation against the Israeli aggression. We then learn from the off-screen narration that the majority of ‘Arna’s children’ died as suicide bombers.

The underlying theme of Arna’s Children is a lack of hope – all attempts to change the monolithic structure of the relationships in the camp are inevitably doomed to fail. The fortifications built into the mental tissue affect reality in a more direct manner than kilometres of barbed wire fences, petrifying the generations-long conflict, causing the successive generations of the Palestinian ‘excluded’ to keep infinitely re-enacting a situation of trauma as their sole point of reference for individual and collective identity. On another level, the film deals with the crisis of representation: ‘Painful experiences are viewed as impossible to represent, because the mind is in shock and unable to translate the experience into something else’.[iii]

In Rajkowska’s Camping Jenin we watch a group of teenagers participating in a Freedom Theater workshop. The Bad Boys are in a similar situation as ‘Arna’s children’ – theatre is to help them develop a distance towards their own traumatic identity. But Rajkowska decides to follow a path of linguistic deconstruction – trauma cannot be directly transposed into the sphere of symbolic depiction. Because of the traumatic context, the language of the representation (including a theatrical one) makes distance impossible, inevitably referencing all activity to a painful memory. In one of the scenes the Bad Boys are asked to sculpt their fears, a classic exercise of workshop therapy. Most of them use the plasticine to represent a prison, a camp. Some are highly complex structures reflecting the complexity of the mental processes shaping the young Palestinians’ inner landscape. These works show an individualised experience that is reaction to living in the conditions of a military conflict, but the experience still does not go beyond the camp. The ritual gesture of burying ‘fears’ thus becomes but another act of repression, heralding an inevitable return of fear in an even more gruesome form.

The impossibility of creating a distance translates at the Jenin camp into a cancellation of the public sphere. ‘There’s no division here into private and public space. If something is public, it will be either absorbed as private or destroyed. Hence the public space is a domain of chaos, dirt and garbage’, Rajkowska writes in her blog.[iv] Thus the problem is revealed of the symbolic linguistic disability of a community living in the shadow of a trauma. Who has access to a language transgressing the emotional creates the law. Power is where there is a possibility to create a narrative, to function in a symbolic space.

‘As soon as we put something into words we devalue it in a strange way’ – the first sentence of a quotation from Maeterlinck opens Robert Musil’s novel about a student of a military boarding school for young gentry men in Austria-Hungary.[v] Preparing the young gentlemen for their future work in the state’s service, the school is a model example of a Foucaultian disciplining institution. A photographic documentation of Joanna Rajkowska July 2008 action – The Uhyst Refugee Asylum – shows the other side of being entangled in language as a symbolic system.

The pictures show empty, uninhabited rooms of a building. In some their former function is recognisable – the large room with a vaulted ceiling had to be a dining room. In another room the bathtub is still in place. On the shabby-looking walls, from which the plaster is peeling off, revealing the outer layers, Rajkowska has put Gothic-font inscriptions – the names of the twenty countries in the world generating the largest number of refugees. Language adopts here the hard, stubborn and indifferent form of a sign. It defines, indicates, but what it references is absent.

The residents of the town of Uhyst in the east of Germany did not agree in the early 1990s for a refugee camp to be created there. Rajkowska’s project is a fictional, ‘empty’ camp that opens itself towards the future, waiting to be filled. The 18th-century building in which it is located for years served as a boarding school for young gentry men. Its disciplining power was based to a large extent on language – documents have been preserved listing precisely the attributes that the graduate was supposed to possess. In Musil’s novel, the school is a place where adolescence means entering a symbolic space, the language, the law. The young Törless rationalises the reality around him in a modern manner, while at the same time experiencing a growing anxiety related to the unconscious, unnameable, irrational.

The Confusions of Young Törless can be interpreted as a representation of the modern, Western trap of symbolisation that cuts the individual off from non-verbal experience. Language creates a norm, beyond which stretches an area of marginalisation. By confining a sort of map of the Third World in a building, Rajkowska refers us to the West’s distanced, language-ossified perspective of perceiving that which is beyond norm – which has been marginalised and repressed. The entire Third World is stopped at the border of language. It is thus situated, in all its complexity and non-recognisability, in the collective unconscious, remaining repressed.

Knows Only Pain and Fear
2008, Interview with Jonathan Stanczak

The Camp as an Image of the World — Joanna Rajkowska