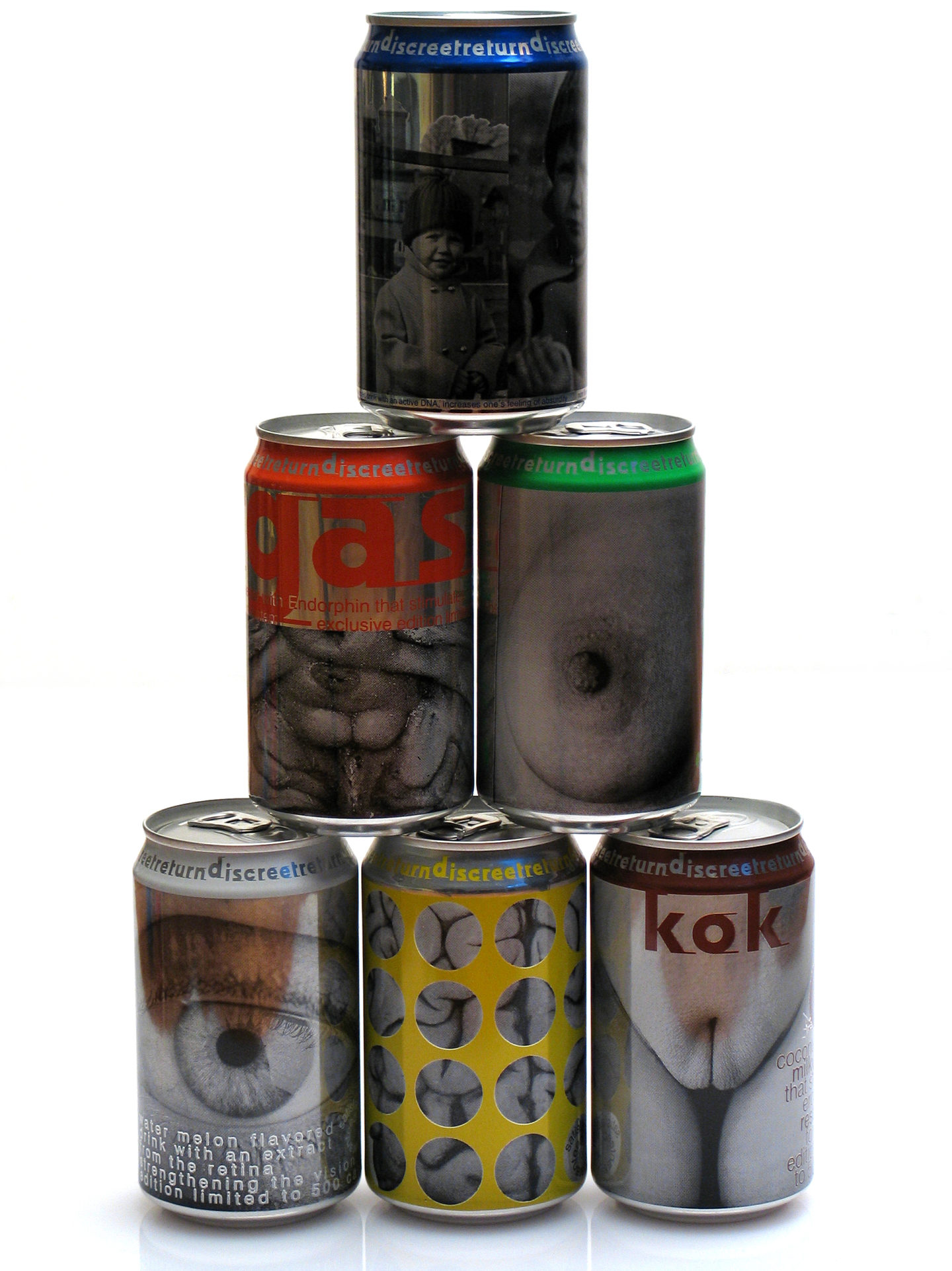 Joanna Rajkowska noticed that products created by today’s industries are, in fact, carriers of information. She decided to produce her own mass products, which she treated as a means of information delivery and used it to developed her own narrative. Satisfaction Guaranteed (Satysfakcja Gwarantowana) is a brand line of products created by Joanna Rajkowska. She has produced a collection that includes six types of carbonated drinks in 330ml cans, soap, Vaseline and perfume.

Rajkowska utilised industrial methods to produce her works in the hundreds and thousands. These were created according to market rules: they have a logo, trademark and carefully designed packaging. Furthermore, they
are fit for use: the drinks can be drunk, the soap can be lathered and the perfumes give off scent. Rajkowska’s products are almost analogous to products on the market. However, a careful consumer always reads the list of ingredients before use, and there, the consumer’s routine is distorted. A significant ingredient used to produce the products of Joanna Rajkowska is… Joanna Rajkowska herself. The list of ingredients of her drinks consists of water, CO2 and preservatives. Then there are some unusual ingredients, such as DNA, grey matter from the brain, extracts of breast glands, vaginal mucus, fragments of cornea, endorphins – all taken from Joanna Rajkowska. The same is true of her cosmetics line. The Vaseline is made with the artist’s saliva, the perfume with her pheromones and the soap with her fat. The packaging design is just as ‘personal’. Here, the artist used photographs from childhood, pictures of her body parts, including those that are generally considered intimate. The Vaseline packaging features a young Joanna with her father, the soap is adorned with her and her mother, while her husband graces the perfume.

There is a description of how the products work and what side effects they could cause. This is not about nutritional values, dietetic parameters, or potential allergic reactions. The effects of consuming Rajkowska’s products are existential in nature. The drinks have refreshing qualities; they stimulate eroticism, kill pain, and later mute the feeling of ‘lacking’ and boredom. They even transform the genotype. Rajkowska’s cosmetics influence her relationship with people close to her. The “family life” (Życie rodzinne) soap fosters “a fear of family life and watching television together”, while its side effects can lead to masturbation. Users of the “on a motorbike” Vaseline, on the other hand, feel “immediate relief” but, at the same time, must be aware of the “loss of the reproductive instinct”. “Aversion towards animals” and a constant “feeling of embarrassment” are other possible side effects in this case. The smell of the perfume, for its part, “liquidates blood connections and gives a feeling of complete oneness” – the side effect here being “a sudden getting on a bus in order to go somewhere and meet somebody”.

Thus, Joanna Rajkowska speaks the language of production, the market and consumption. It is a universal and flexible language, a true lingua franca of our times. The artist uses this flexibility in a surprising manner. The narration of mass products is normally anonymous – ‘personless’. Rajkowska, however, fills mass industrial production with personal elements. She does this with a bitter sincerity bordering on exhibitionism. She offers us an autobiography and sketches an intimate self-portrait broken into thousands of cans, soaps, Vaseline and cosmetics. In a world of technology, one invention opens the door to hundreds of new possibilities. Satisfaction Guaranteed acts similarly. To me, the most fascinating element of the project is what I would term the mechanism for the distribution of existence in the contemporary world. Joanna Rajkowska completes this differentiation by juxtaposing intuition and a nasty laugh. Satisfaction does, namely, have an aura of disturbing lightness and of black humour – drama and horror are hidden behind the provocative jokes and vice versa. This ironic and attractive method allows the artist to place her project in the exact centre of discourse on contemporary culture and permits her to point tentacles in directions as varied as this discourse itself.

Satisfaction Guaranteed opens a sack of meanings, associations, suspicions and interpretations. How can we interpret the transformation of a young woman into a soft drink? As a kind of strange communion, stripped of its Christian metaphysicism and translated into the language of materialism? As a psychoanalytical settlement of accounts with one’s own life, where the therapist’s coach is replaced with supermarket sales of one’s own fears and frustrations? As a memento of the consumer society whose participants are, in fact, objects of consumption rather than the consumers themselves? One cannot escape associations with communion. After all, we deal here with a body that, with the power of words (written on the packaging), changes into an object – food. However, Rajkowska’s strategy is closer to a shamanic way of thinking of indigenous cultures than to Christian mysticism. The artist refers to the mentality of cannibals who believe that by eating somebody’s heart or liver they will acquire the strength and also the possessions of the victim. This thread does not appear by coincidence here. Paradoxically, contemporary mass society has more and more in common with some tribal cultures and the tendency for a magical perception of the world is directly proportional to the influence of the media on our consciousness. Albeit, this is not exactly a new perception. As the advertising slogan of her products Rajkowska promises that “after consumption, you will be able to experience (her) life”. This is also how advertising attempts to attract us every day. Advertising makes us think that if you use this deodorant, you will be as good-looking as the man using it on TV. If you buy that car, you will get a sexy girl like the character in the commercial. The cannibals would indeed understand this way of thinking very well. Cheap consumer products likewise influence our lives in a magical way. Washing powders stabilise the harmony of our family life; electric razors transfer some of their power to their user. People, catalogued by huge corporations as human resources, are a natural resource, defined by demand, health and skills. One must only mention the examples of Mick Jagger registering his name as a trademark and the actors from Baywatch insuring their breasts for millions of dollars to see this particular fact at work. Stress is no longer the exclusive domain of the psychotherapist either: now, it can easily be relieved by shopping. The heavy baggage of life thus can be verbalised, visualised, transformed and gotten rid off whether in the office of psychoanalyst or at a garage sale.

Joanna Rajkowska attempts to discover the rules of the game in which we all participate and which we play whether this is our wish or not. The artist assumes it is better to play this game with an awareness of its rules. And, in Satisfaction Guaranteed, this knowledge allows Rajkowska to manipulate the game’s process and expropriate it for her own purposes. Above all else, however, Joanna Rajkowska constructs a double relationship with the viewer. She offers the viewer art in the most accessible form – consumption – in person (literally). Beneath this gesture, we see bitterness – both in the loss of trust in art as a channel of communication, but even more so in the readiness of viewers to use this channel. In this sense, Satisfaction’s products are a desperate attempt to make contact. It may be that this is no longer possible through a classic artistic message. The artist must then move to the lowest and most fundamental level of every day activities and needs that we all share: eating, washing and cosmetics.

On the other hand, one could also perceive her work as a challenge thrown at the public: I want to speak to you even though you don’t want art. I will force you to listen using your own desires. I will nail your attention with objects that you desire: consumer products. I will give you something that you can digest: carbonated drinks Joanna Rajkowska suggests that our existence is like a single-use disposable product. The world transforms us and chews us up. It does not digest much, though, of the microcosmos of personalities, emotions and potential, it barely gets a few needed elements: looks, some skills and social roles. The rest is spat out. Joanna Rajkowska revolts against this arrogant waste. Her project is a proposal to consume the individual in the most economical way possible. The proposal is ironic and borders on the provocative in accordance with the rules of marketing – she manipulates us without a second thought. In reality, the products of Satisfaction are not made with her bodily elements. The artist did not want to go through brain surgery to extract grey matter for one of her drinks. Nor did she want to undergo liposuction to obtain fat for her soap. We are simply in the area of artistic fiction. Rajkowska presents a certain potential: total consumption beginning with the body itself through to biography and then all the way to the most intimate emotions, all within the conventions of black comedy. 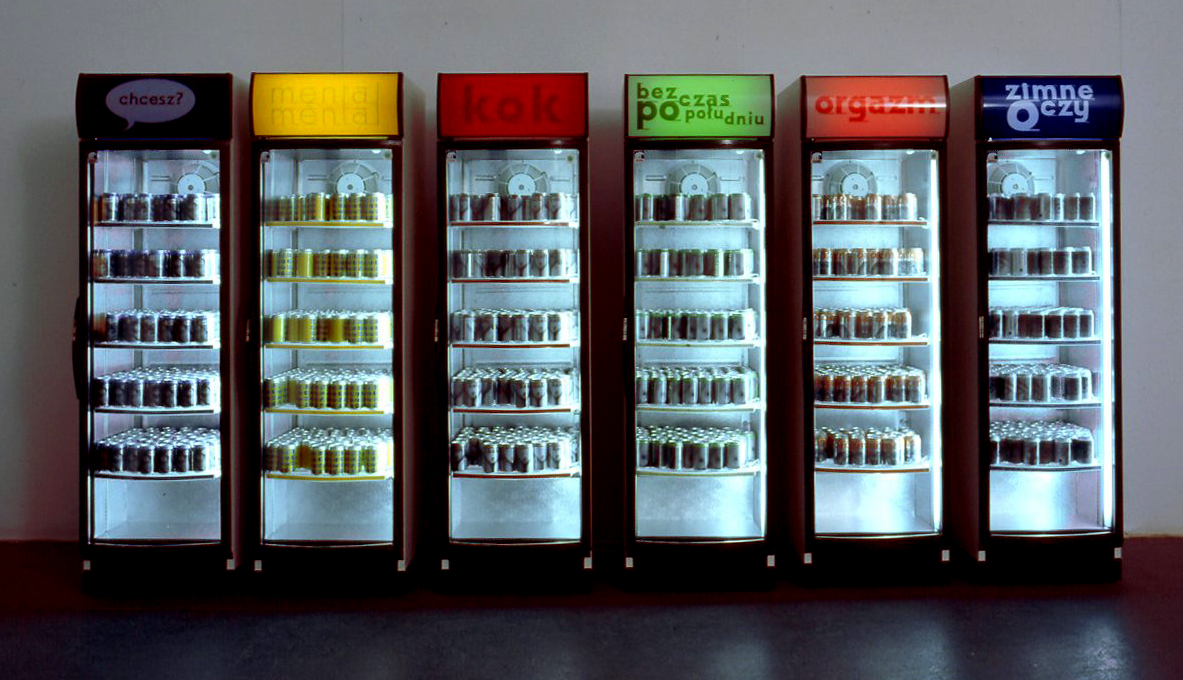 What does it mean to you to be European
2019, Masthead by Joanna Rajkowska

A DISRUPTIVE DESIRE TO BE THERE WHERE IT STANDS
2020, by Robert Yerachmiel Sniderman