UNITARY GNAWING; SEVEN CONSIDERATIONS FOR THE CONSTITUENTS OF RHIZOPOLIS by Robert Yerachmiel Sniderman

Our Worlds Are at War, Ailton Krenak and Maurício Meirelles

Joanna Rajkowska: My family home has been always full of dead animals. I would leave my bedroom and there was a dead doe, Paulina Reiter 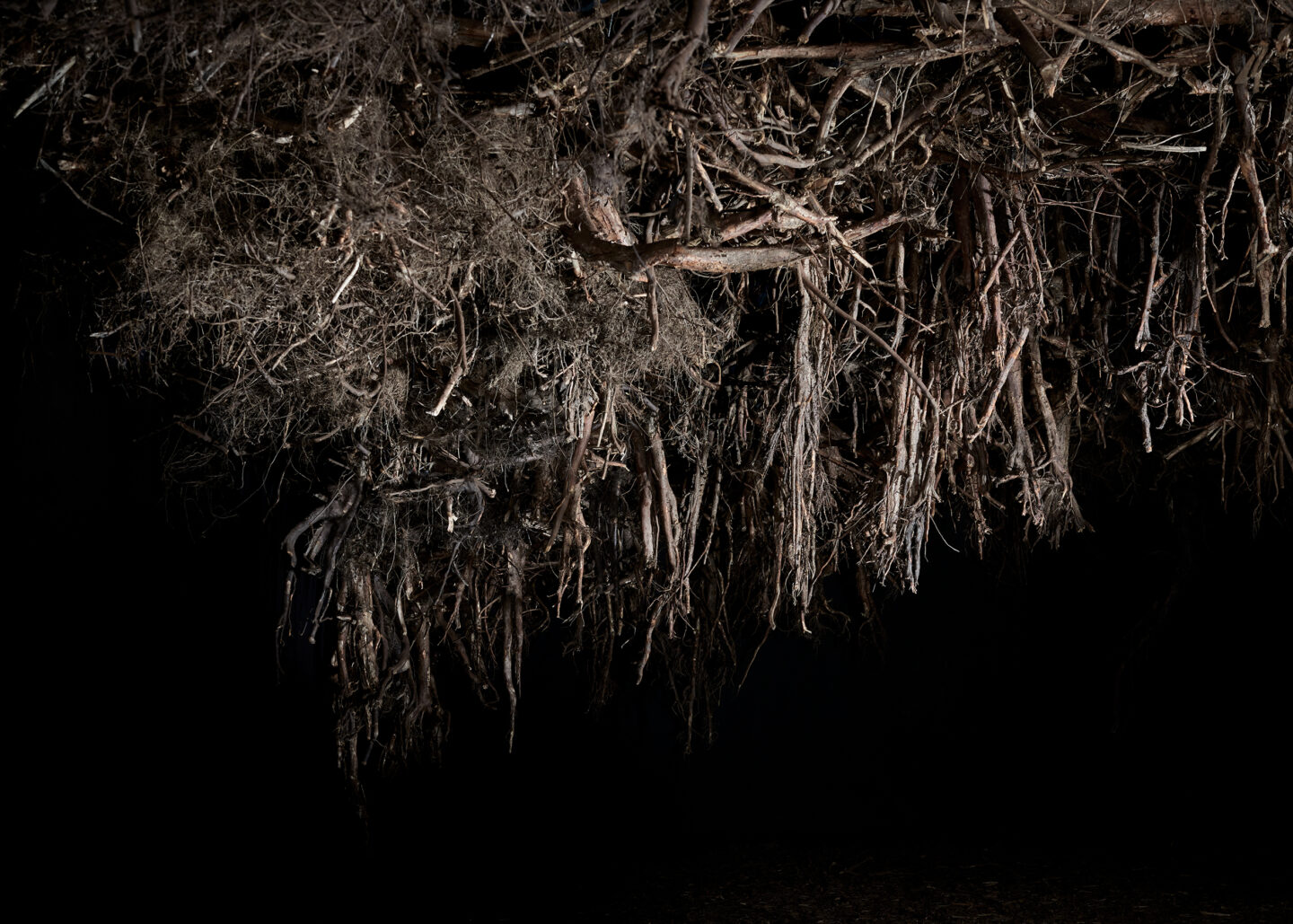 Rhizopolis is a futuristic scenography for a non-existent science fiction film about the future of our planet. It is conceived as an underground shelter for a handful of people who have managed to survive a series of cataclysms. The series of events, which – according to the prophetic description by Naomi Oreskes and Eric M. Conway in 2014 – “led to the Great Fall and Mass Migration”. The dystopian scenario of this film assumes that the shelter for the human species is provided by trees, whose extensive root systems made it possible to create caves where the survivors could breathe and nourish themselves in the underground biotope created for them by the trees.

Rhizopolis is a dark, nourishing space, smelling of earth and wood, where the atmosphere is created by cascades of plant forms, discreetly illuminated from above. Viewers can touch powerful, woody roots, capillaries, elastic appendages – root hairs.
Images of viewers captured by cameras installed amongst the roots can be viewed on the projections in the adjacent room, where we see ourselves and others in a film about the ultimate place of survival. So Rhizopolis is both a stage and an installation, as much as a place: an imagined biotope for survivors. It creates a network of relations between different levels of representation and allows an audience both for distanced observation and participation in a fictitious film. 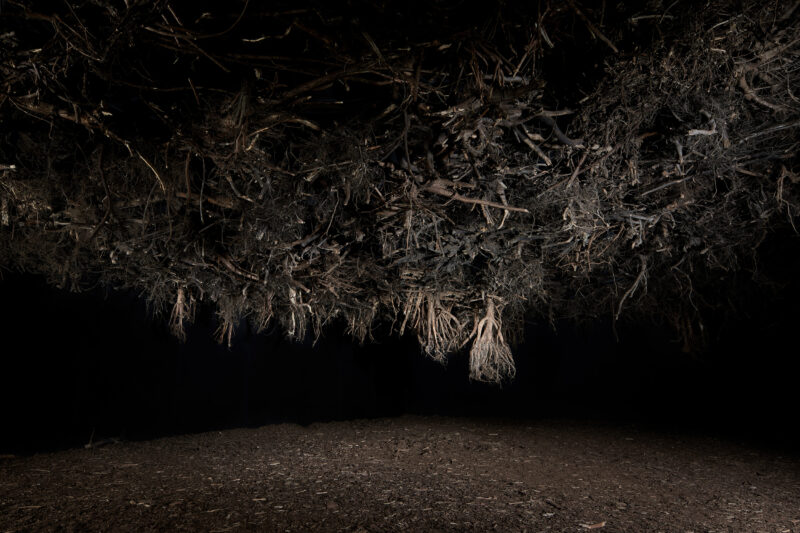 Roots nourish, access water and anchor the plant in the ground. There are studies that indicate that plants pass important information between themselves through their root systems as well as substances that inhibit the development of disease. Roots are absolutely integral to the life of trees. Trees, in turn, are absolutely integral to our human lives. Rhizopolis takes this element – the interdependence – a step further and imagines a situation where humans have become directly dependent on trees. The project examines it and expands it into a futuristic fiction, attempting to create a multidimensional message in which fiction and real fears of the modern world gain a startling new visuality.
The space of the exhibition will be divided into two parts. 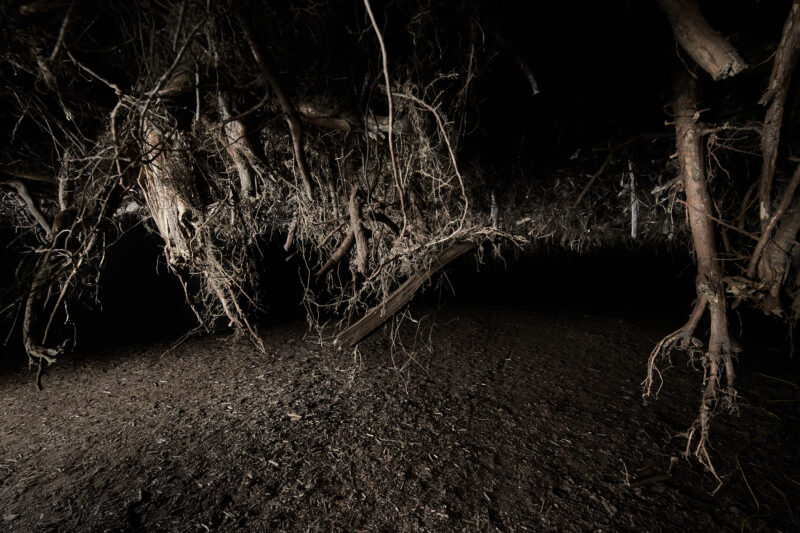 MAIN ROOM
The larger part will have black walls and ceilings, and will have a dense network of tree stumps overhead – excavated from the ground and cleaned, the remnants of the trunk and roots of fallen trees. Viewers observe the trees from below as they traverse the space among the suspended roots, witnessing their complex structure; they raise their heads, look at the dangling roots, touch them. They can move freely between them, but they are surrounded by whole branching systems whose forms are accentuated by discreet lighting installed among them. The floor is covered with an uneven layer of compacted soil, pieces of wood and bark. The air is fresh, cool, it smells of earth, moss and wood. Rhizopolis is a cave of life in which we absorb the aura generated by tree roots, smell and darkness. 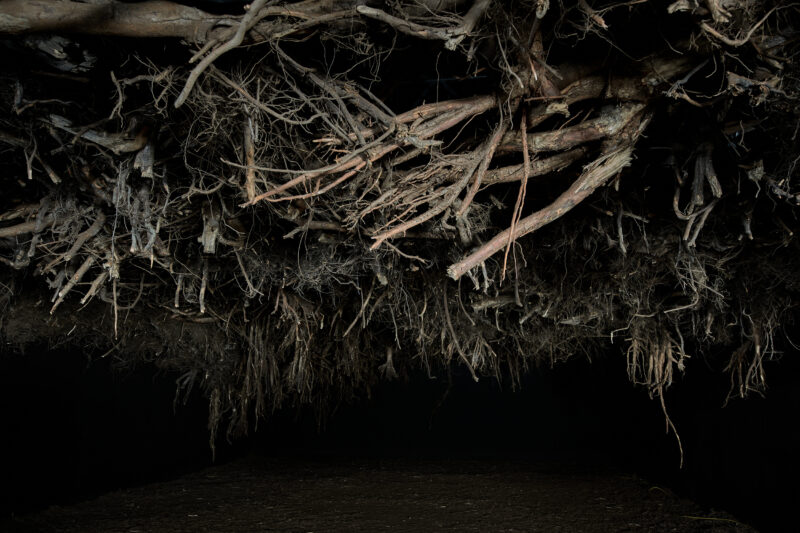 The materiality of the roots and of the soil, their texture, smell and colour, is the only point of reference. The rest of the space is dematerialised by abstract black and the illumination of stumps and viewers. The installation is conceived as an intense, physical experience primarily engaging the senses and imagination. The aura of this futuristic shelter is peaceful, silent, and saturated with the intense presence of the real Other of our times – Other species.
Thus, Rhizopolis is an underground or rather under-forest shelter, where humans are dependant on what they can extract from the root systems above them. Whether they are organic substances formed in the process of photosynthesis, water or mineral salts extracted from the substrate, people by necessity enter the circulation of matter of other species in order to survive. Rhizopolis is an attempt to describe the absolutely fundamental dependence on the conditions that make our biological existence possible. 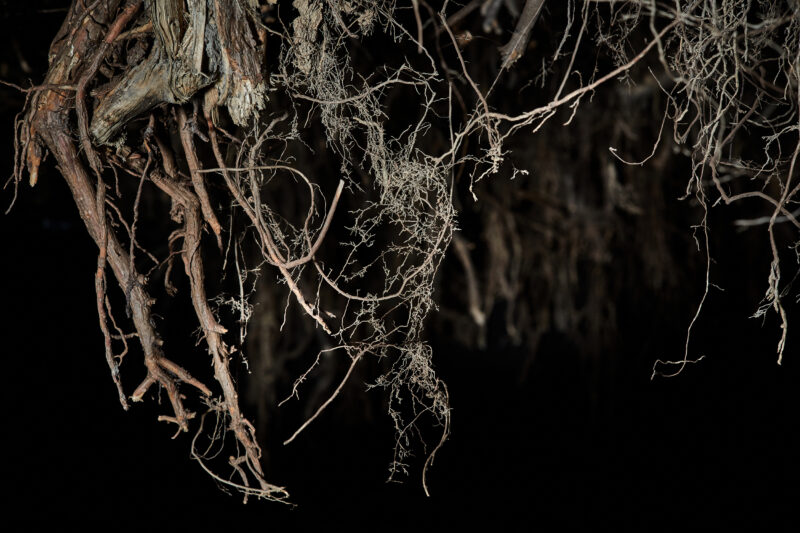 Cavities and caves beneath root systems create an architecture that the survivors adapt to their needs. Found forms, a natural vernacular, offering a strange shelter, the functionality of which we cannot understand using disciplinary thinking about architecture. Only after rejecting these rules are we able to find ourselves in this underground world. The feminist understanding of architecture proposed here rejects its universal subject, which simplifies and unifies everything. We reach for the hypothetical possibility of a form created by the world of nature which people will adapt with the limited resources available to them.

The tree stumps will be obtained from areas where there has been extensive damage by so-called straight line winds. In the summer of 2017, millions of trees were blown down in Bory Tucholskie, a national park of peat bogs, pine forests and lakes. It was estimated that roughly 8.2 million cubic metres of lumber was brought down by the storm and it was described as “the worst disaster in the history of Polish — and perhaps even European —forestry”. The Forestry Office covering the Bytów, Lipusz and Kościerzyna (Bory Tucholskie area) have agreed to deliver the stumps with complete root systems. 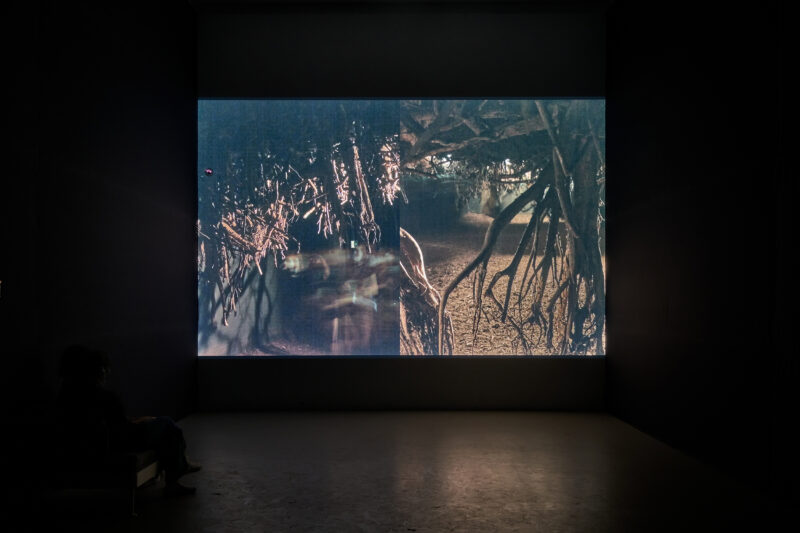 THE DARK ROOM
In Rhizopolis the viewers watch and will also be watched because four cameras will have been placed among the roots. Their footage will be screened in the second, smaller room in which viewers can see themselves and others in the tangle of roots on the set of the fictional film. The cameras will be activated by motion sensors, so the projection feed will switch from camera to camera. The footage will be screened with a few minutes delay. The room will be a conventional screening room, painted black and with the projection covering one entire wall. The floor will be carpeted in black and there will be comfortable sitting and lying places.

1. Dystopia – spatial structure (“Metropolis”, Fritz Lang, Thea von Harbou)
In 1927 UFA released a dystopian film by Fritz Lang called “Metropolis”, where the authors, Thea von Harbou and Fritz Lang, portrayed a future society, with its class, culture and wealth divisions. The Metropolis of the film was a multi-storied/multilayered structure, with its luxury residential and office buildings and gardens on the surface owned by capitalists, and its proletariat and machines underground. Naive, though visually compelling, it encompasses both the fascination of progress and the fear of the inevitable consequences – politically, socially and in terms of urban expansion. Between 1927 and 2018 all the promises and fears grew enormously – we know how dangerous we, as a species, can be and we know that only we, as a species, can really save the planet’s life from anthropogenic disaster. Rhizopolis is inspired by the division of the world at the top and the world below, but these locations have different meanings and economic relations have been replaced by interspecies ones.

2. The Penumbra Period (“The Collapse of Western Civilization”, Naomi Oreskes and Eric M. Conway)
The fall of Western culture is described from the perspective of the future (year 2393) by a historian who analyses the sequence of catastrophic errors, neglect, negation of the facts and results of the scientific research of the Penumbra Period (1988-2093). The drastic increase in temperatures, rising sea levels and droughts finally lead to the Great Fall (2093), when the disintegration of the West Antarctic ice cover leads to mass migration, completely changing the world order. The narrator, an experienced researcher and historian of the Second People’s Republic of China, asks how it was possible that the elites of the highly industrialized countries of the West, the children of the Enlightenment, would allow a series of suicidal decisions to lead to the annihilation of civilization. This text is fundamental to the Rhizopolis project not only by providing a framework for fictitious events, but above all by providing inspiration for describing the new state of mind of a handful of people who managed to survive – the need for a fundamental revision of our relationship with the environment.

2. Interspecies community (“She Unnames Them”, Ursula K. Le Guin)
Ursula K. Le Guin, in her story “She Unnames Them”, speaks of Eve, who found that Adam’s attribution to other beings of living names complicated interspecies relationships on Earth. Therefore, she inspires them to reject their names in order to become free from the name, thus rejecting all hierarchies and dependencies. Then they can really be together. In a sense, Rhizopolis unravels its meanings between the utopia of an ideal interspecies community and the dystopia of a dying, human world.

3. Affinity of species – Donna Haraway
Affinity, in the sense used by Donna Haraway, is a phenomenon that organizes the community more efficiently than identifying sameness. To cling to another species, to recognize them, bring them closer despite being different – that is what transcends community built on similarity. As a biologist and philosopher, Haraway describes non-human processes as a self-organizing force. The author of ethical sources is looking for self-organization, not organization as a process inspired from the outside and based on the hierarchy of species.

3. Exceeding disciplinarity –  Michel de Certeau
The French sociologist Michel de Certeau in his “Practice of Everyday Life” draws attention to the importance of non-disciplined thought, freed from methodological limitations. He goes towards practicality, towards tactical actions instead of strategic ones, and raises doubts about expert attitudes. The expert “represents knowledge”, but does not necessarily have it, because by reproducing what is expected of him, he does not renew the meaning of what he is identified with. Rhizopolis, therefore, ranks as a non-disciplinary concept of possible forms of interspecies communication and cooperation. 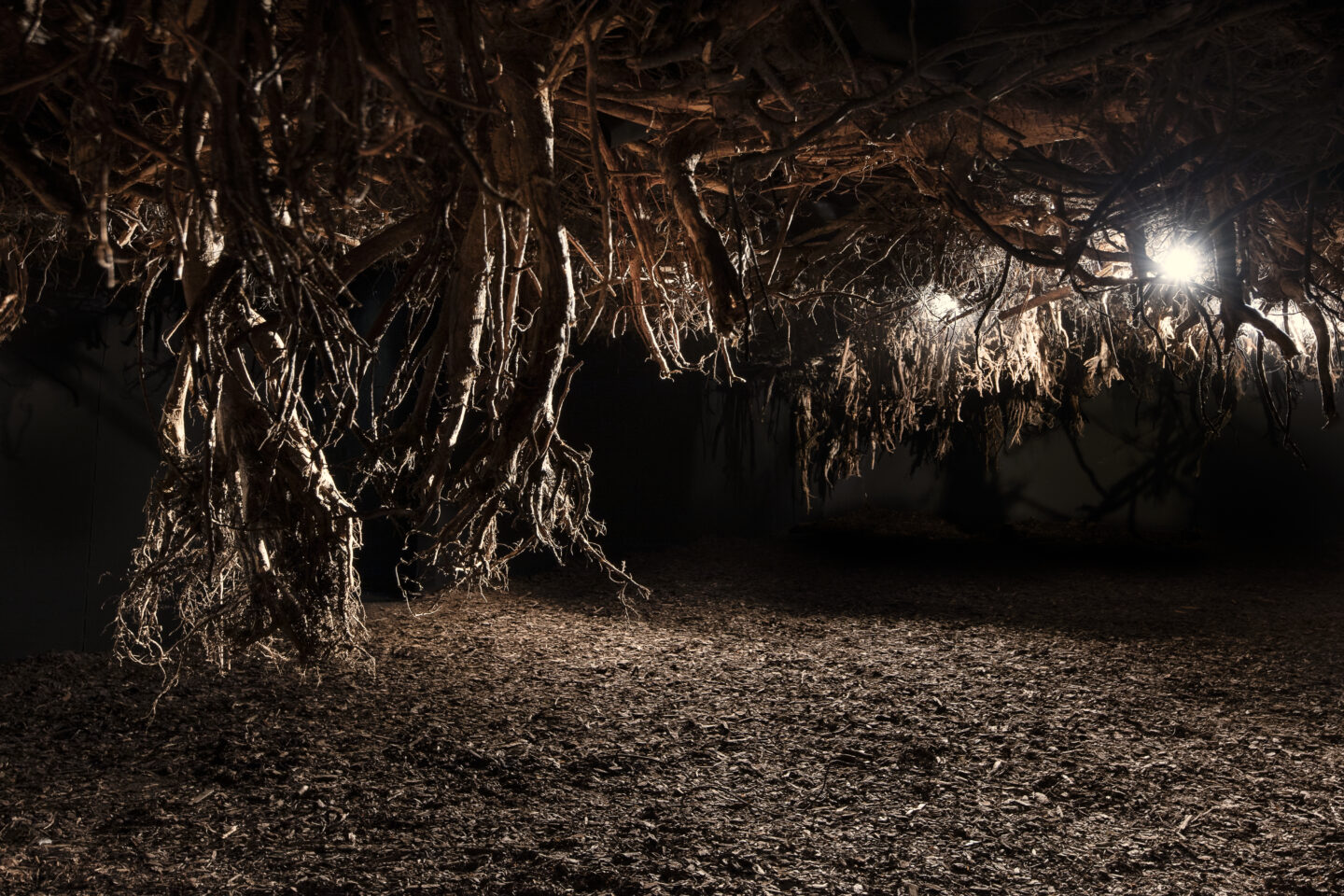 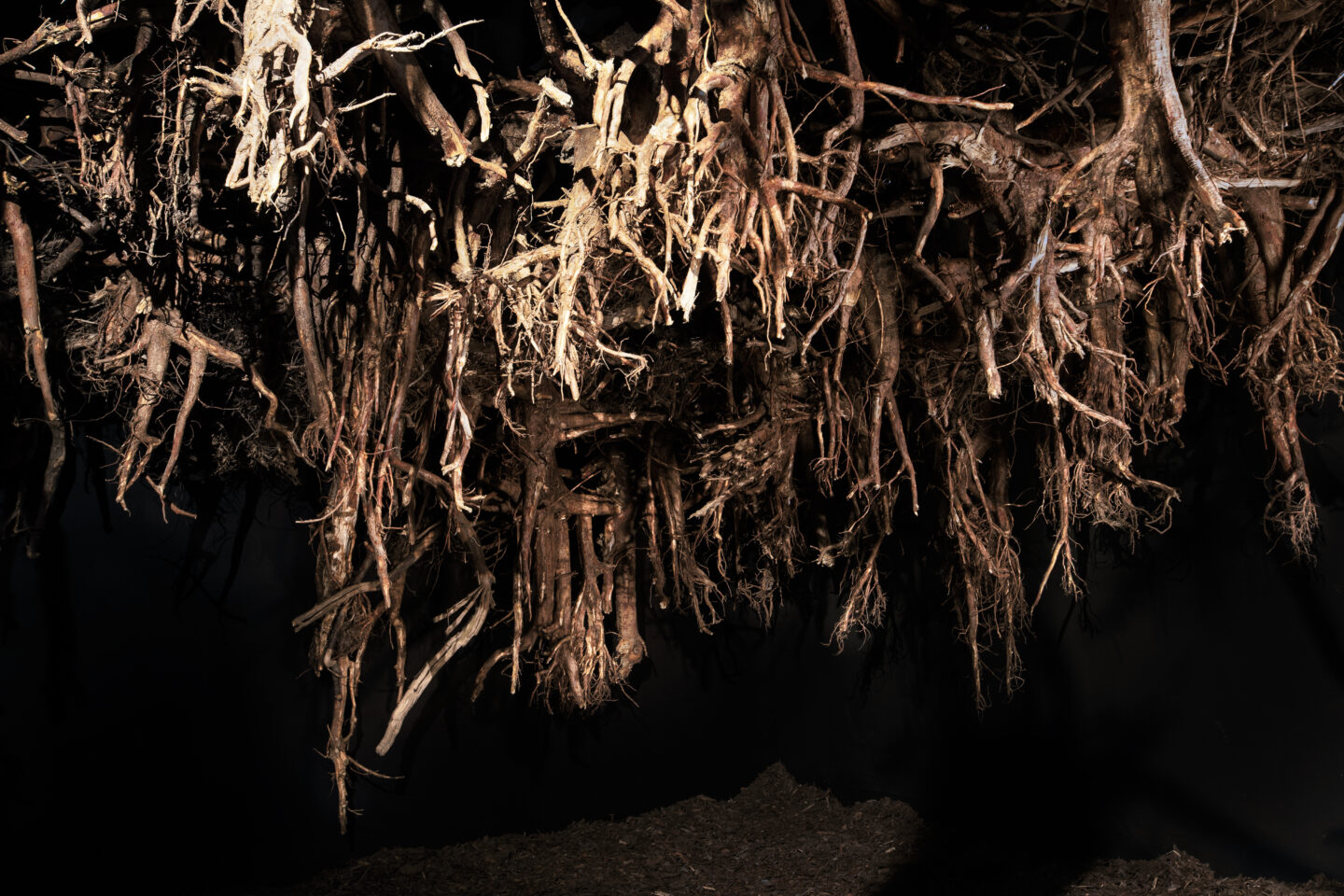 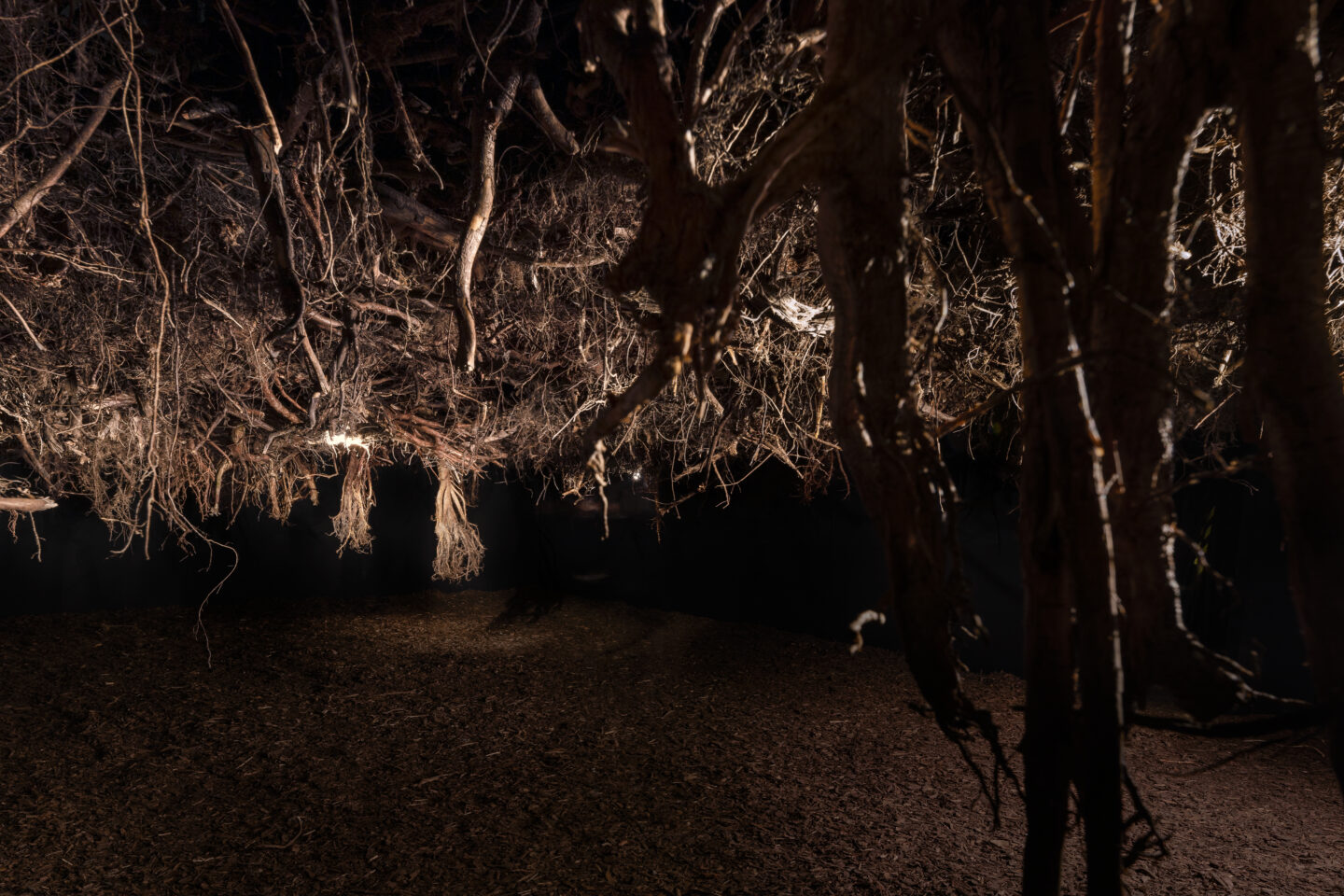 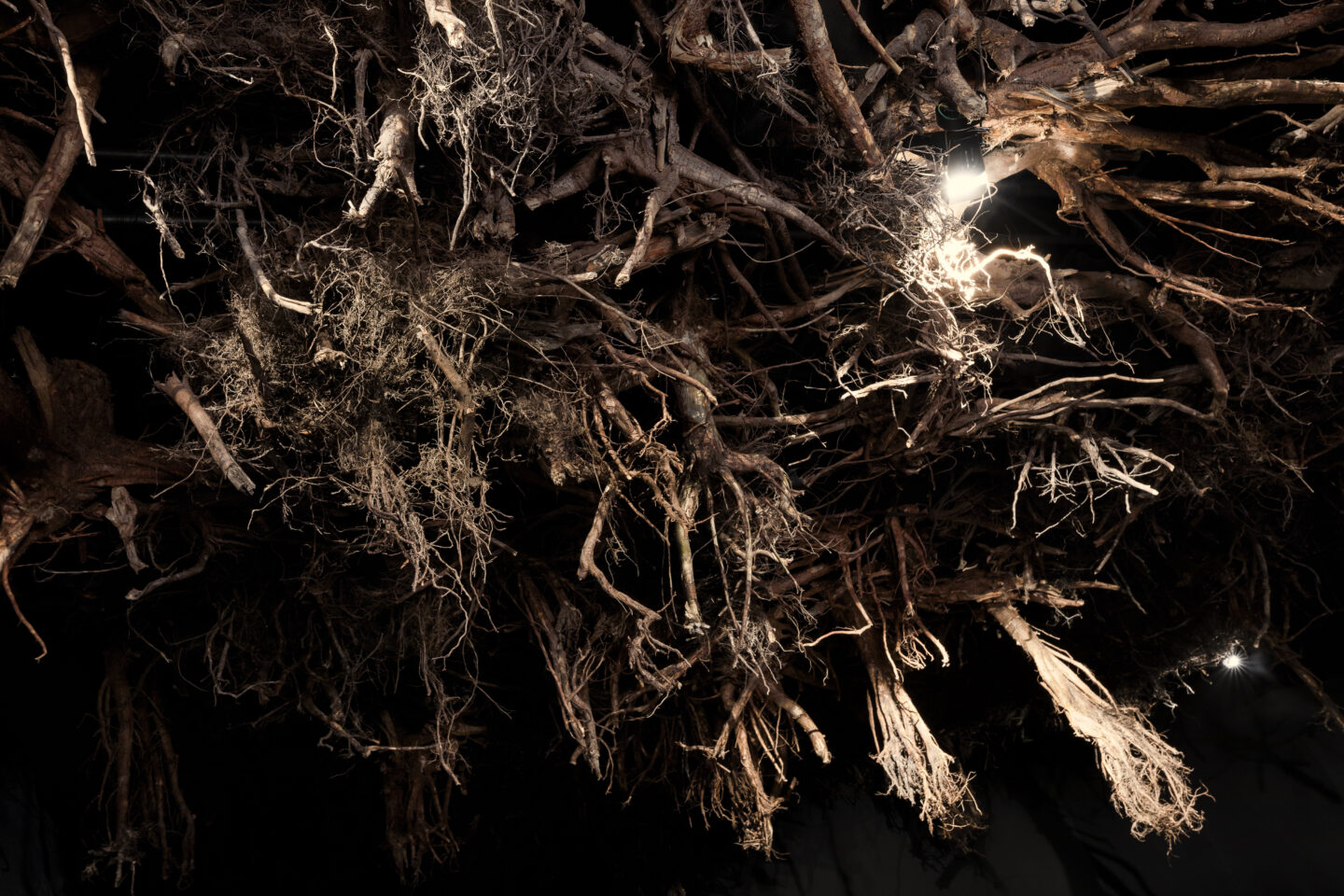 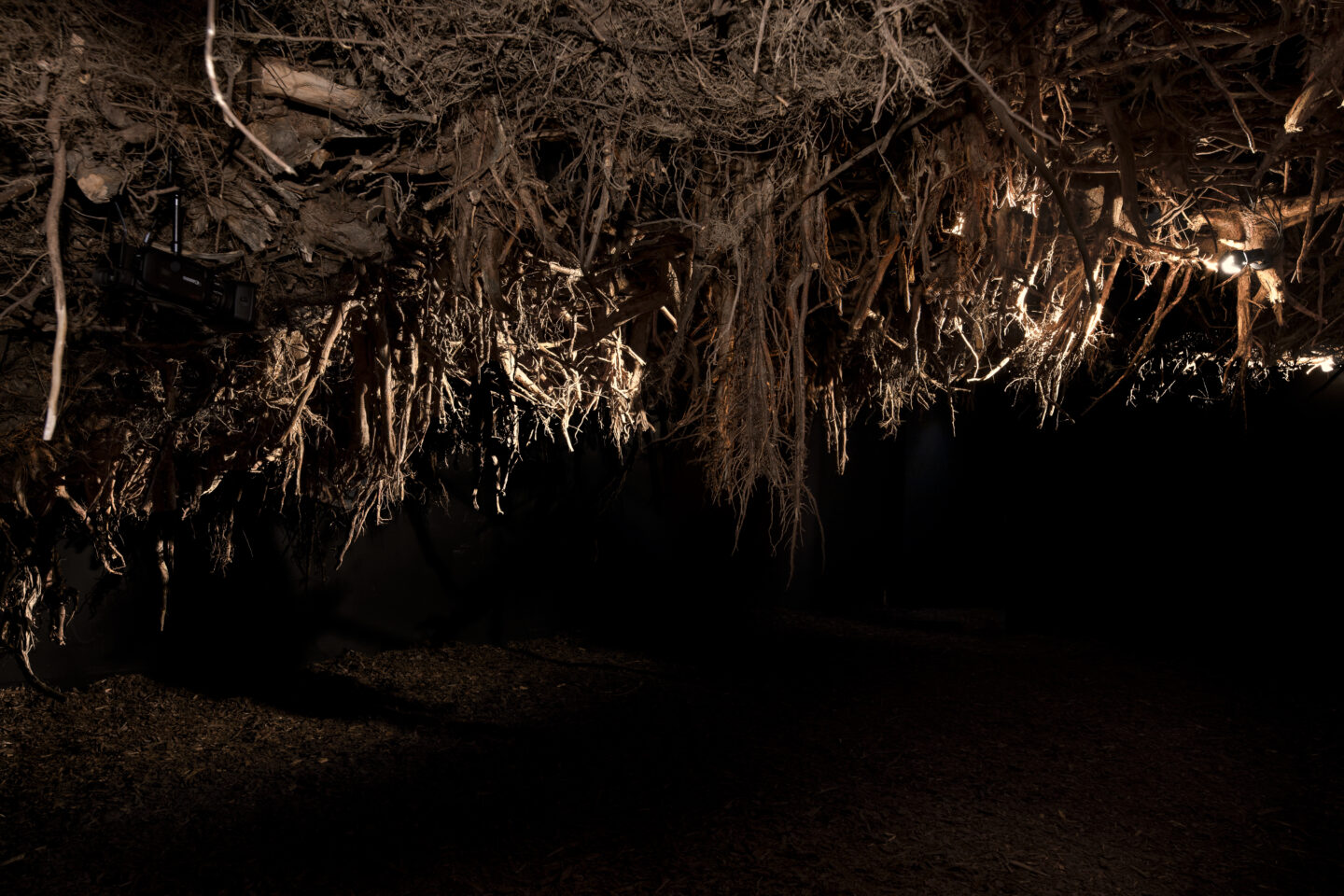 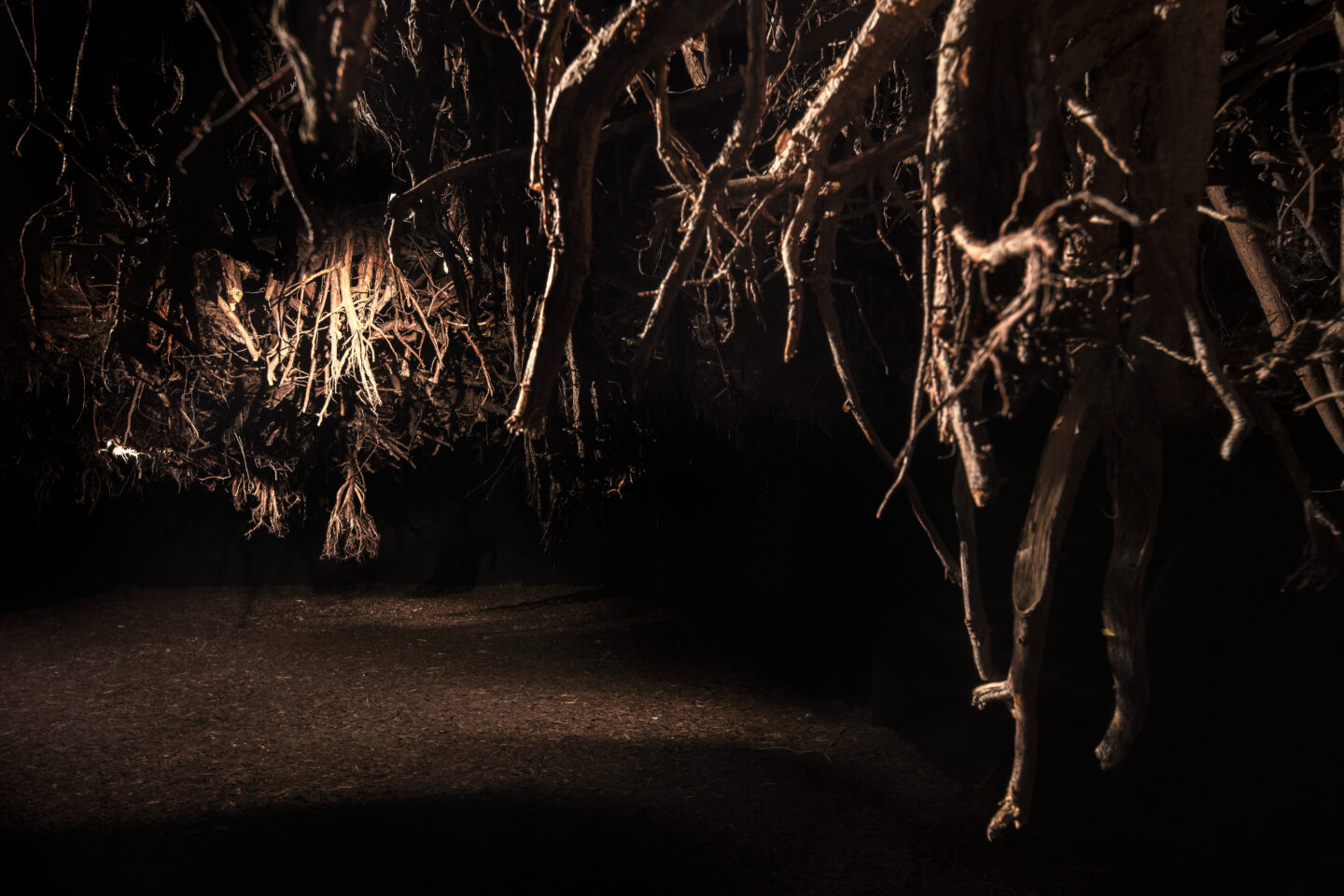 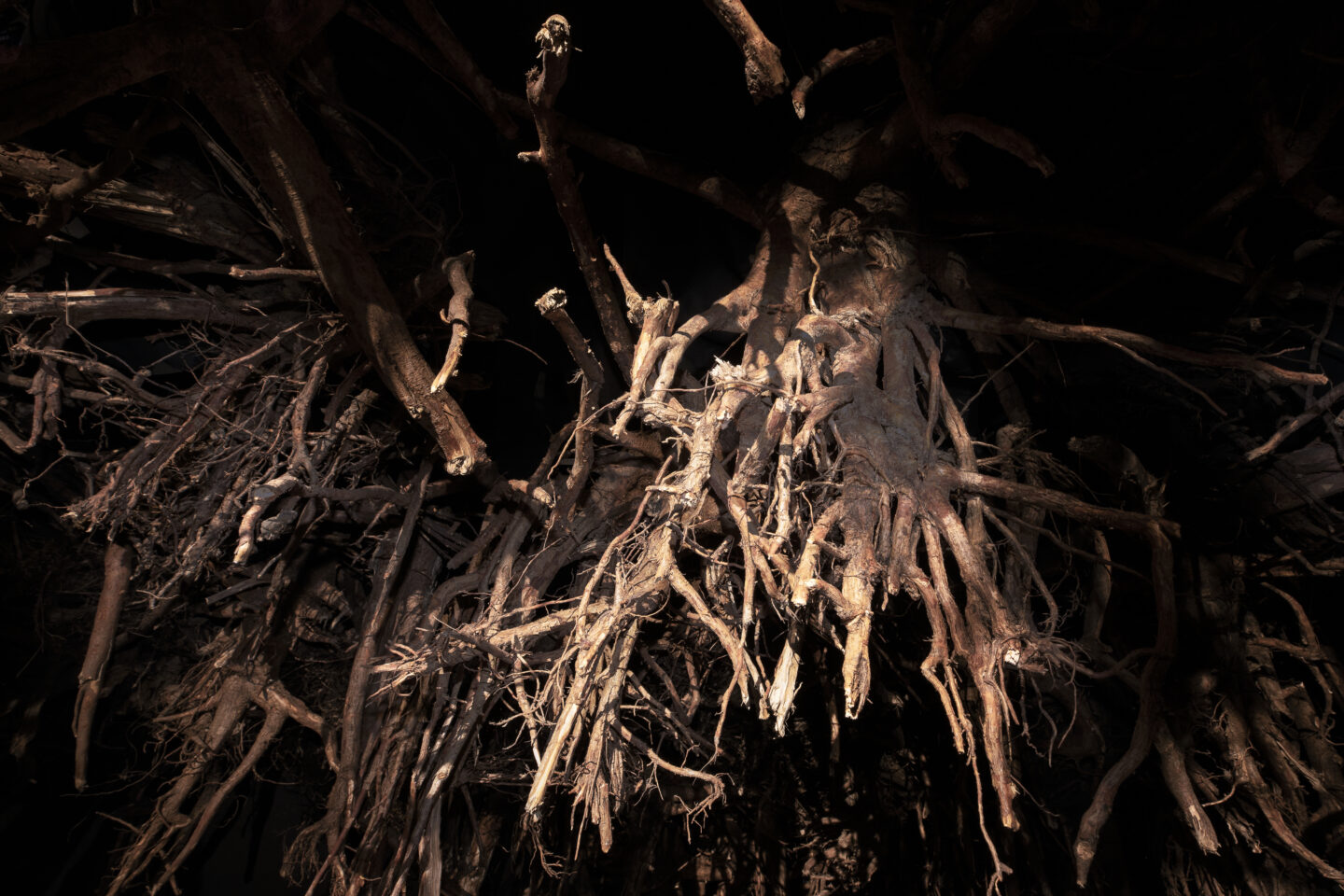