“A woman is the giver of life, she safeguards life, so ‘Woman’ and ‘life’ are synonyms.” Svetlana Alexievich, The Unwomanly Face of War, 1985 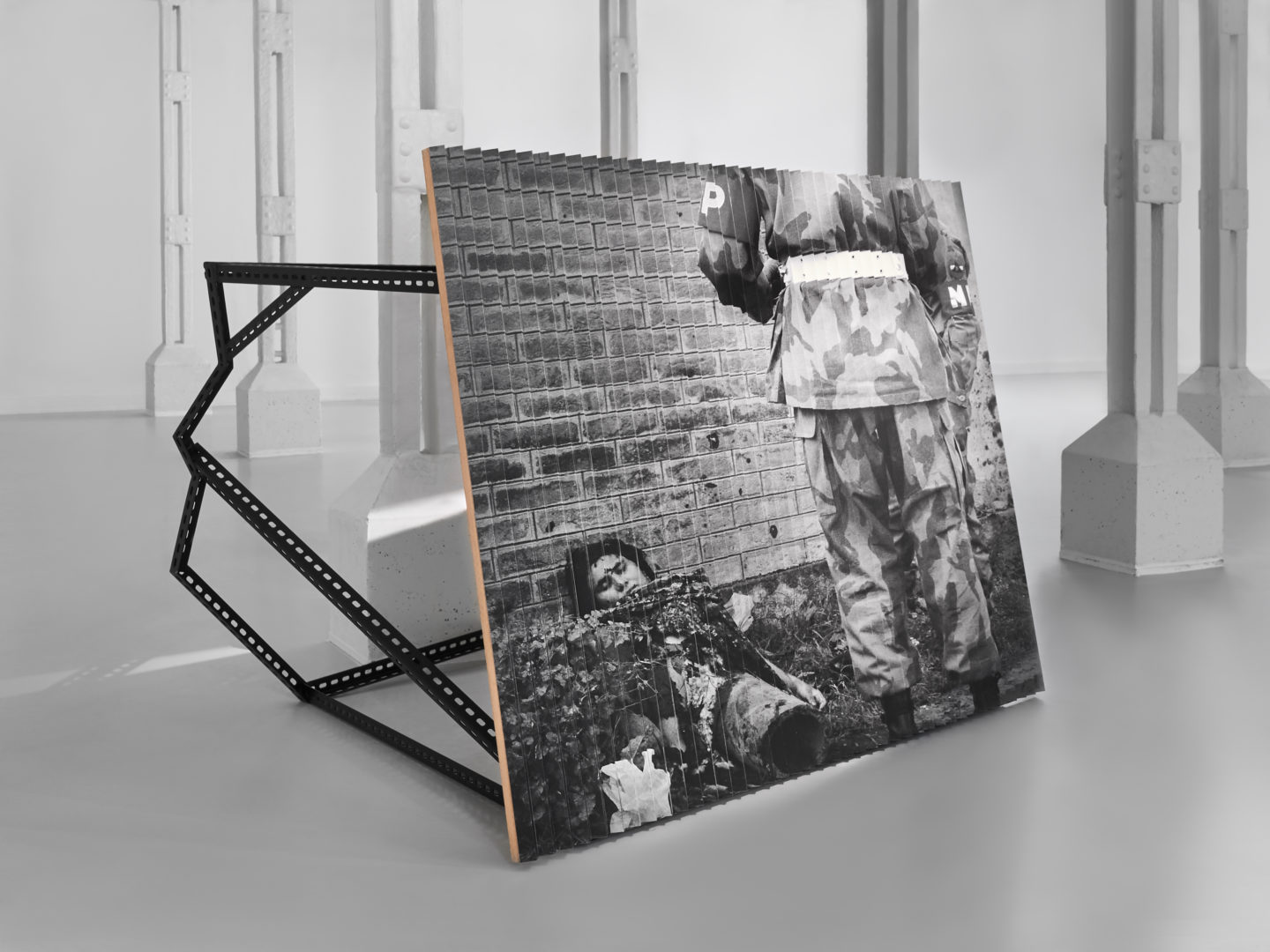 Joanna Rajkowska’s Suiciders is unquestionably a difficult work: difficult to make, to view, and to write about in any meaningful way. It does not analyse or diagnose. The project consists of eight pairs of images: one half of each pair is a news agency photograph of the dead body of a female suicide bomber; the other is a recreation by Rajkowska in which the artist’s own body takes the place of the corpse. This is not a work that offers possibilities for hope or understanding. Instead, it lives on the limits of empathy. It is, in Rajkowska’s words, “a portrait of impossibility”.  In the gallery, the paired photographs have been printed, laminated, sliced into strips, mounted onto aluminium, then onto MDF, and attached to a series of metal structures that hold them aloft at a low angle from the horizontal. In advertising parlance, the resulting prism-shaped forms are known as trivision signage. This enables the image of the dead body to be displayed on one side and Rajkowska’s recreation on the other. An accompanying text notes that a similar technique can be seen not only in contemporary advertising but also in medieval votive paintings. Unlike both these modes of communication, however, Suiciders does not make promises it cannot keep.

Instead, the use of trivision signage creates several immediately noticeable effects: firstly, in order to look from one image to the other, the viewer in the gallery must move, literally shifting both their body and their perspective in relation to the image; secondly, wherever one stands, the structure means that each image is never visible in its entirety. One’s point of view, therefore, must continually shift. And thirdly, this means that you can never see both images at once: there is no way to gain a position from which to view everything.  Suicide bombers, human remains, suffering, war: Suiciders treads undoubtedly controversial terrain. The project was first shown at TRAFO centre for contemporary art in Szczecin, Poland, then at the first edition of the Warsaw Biennale in 2018. TRAFO’s director, Stanisław Ruksza, who commissioned the work, made the decision to limit the number of people allowed in the gallery at any one time. “It takes a special state of mind to be with the project,” Rajkowska tells me over Skype. Nonetheless, she is very clear on what the project is not about. The images, as the accompanying text stipulates, “are devoid of any ethical imperative, they do not pose questions about the value of life or suggest better solutions, they do not reflect on the complex reasons for the dramatic decision to take one’s own life or the lives of other people.”
Instead, as with many of Rajkowska’s works, the focus is on the bodily and the material. Rajkowska consistently works beneath the lofty abstractions of rationality and language. Here she also rejects affect. “This is not about the emotions,” she says. “This project has been done without involving that whole psychology of response at all. I did it as a body-to-body response, as an impulse. The first instinctive response is to fill the gaps, to make something that is not integral, integral again, to resurrect the body, literally, elevate it, put it upright, shake it. I stopped at this level.”

Suiciders is therefore about the limits of empathy. “This project stems from complete helplessness,” Rajkowska explains. “There is absolutely nothing vicious except the sadness and the helplessness and the despair of someone who knows they cannot do anything to change the situation or even properly think about it. It’s about the impossibility of empathy. It’s based exactly on the difference between these women’s situations and my situation. Our empathy stops somewhere and I’m trying to visualise this moment of the breaking point.”

Rajkowska also cites what she describes as her “unusually Eastern education” – specifically her training under artist Jerzy Nowosielski at the Academy of Fine Arts Kraków. Nowosielski, whose own paintings were strongly influenced by the Orthodox icon tradition, Russian unorthodox mysticism and Surrealism, argued that, whether artist or viewer, one ought to approach images not as objects to analyse but as routes to identification with the other, almost as incarnations. Rajkowska recalls Nowosielski’s “quiet passion towards the world” and Suiciders, she says, is “definitely a part of my unfulfilled efforts to meet his requests”.  Like a number of Rajkowska’s previous works – from public art installations like Greetings from Jerusalem Avenue (2002-onwards) to ‘life projects’ such as Born in Berlin (2012) – Suiciders has been a long time in the making. Rajkowska has been collecting photographs of female suicide bombers for over a decade. In 2008, while staying in the Palestinian refugee camp at Jenin, she spent a night with a family in Israel whose daughter had been the victim of a suicide attack. The girl did not die – extraordinarily, her hair cushioned the blow and she survived – and the family set up an organisation for parents whose children had been victims of such attacks on both sides of the Israel-Palestine conflict. Strangely, Rajkowska recalls that, late in the evening, after the family had consumed a quantity of vodka, they accused her, as an “activist”, of sowing hatred and instigating the suicide attacks. “What is the matter that we misunderstand so much? Rajkowska asks. “I still don’t know.” In lieu of an answer, she began collecting photographs.   She enlisted a photo editor to help source images from news agencies. Once the idea for the project began to crystallise, the images were selected not for their emotional force or due to the particular circumstances of the event; rather, Rajkowska stipulated the images she needed solely on the basis of a series of straightforward technical requirements. They had to be high enough quality to be reproduced at a certain scale; the bodies had to be in positions that the artist could convincingly replicate; they had to be recognisably female. Rajkowska then purchased the appropriate image rights. “These images exist,” she explains. “You can look at them and give up. Or you can look at them and do something. And that’s my response – I’m trying, in all my helplessness, to do something.”

The result is that the majority of the images were originally taken by professional photojournalists. But not all: many photographs of the bodies of suicide bombers are taken by the soldiers who killed them: as trophies or displays of pride or simply as evidence of the job carried out. In ‘Dikwa, 11.09.2016’, for example, the accompanying press agency text gives an insight into the modus operandi of sentries who shoot at anyone deemed “suspicious” or abnormal”. But many of these amateur images are too grainy to reuse or the body parts are too mangled to be recognisable, too far apart to be recreated.  One image is quite different: ‘Baghdad, 3.03.2008’ is a police portrait of Samira Ahmed Jassim, accused of recruiting more than 80 female suicide bombers in Iraq. Jassim is said to have admitted that the Sunni insurgents who she worked for used rape as a coercive tool, “with the ‘shamed’ women persuaded to redeem themselves through suicide attacks,” according to a BBC report. Why include such an image, I wonder? Aside from the artist, Jassim is the only living subject in Suiciders and also the only one not to remain nameless. “I didn’t want this to be a story about victims only,” Rajkowska explains. “Suiciders is a story about our lack of understanding, the impossibility of understanding, the impossibility of empathy and that also applies to this woman.”

With the images collated, Rajkowska then set about recreating them. “When you try to become somebody else visually, everything has to work in terms of light, body position, the relaxation or tension of certain muscles,” she says. “The living body is never a dead body, but you can pretend…” But despite working long hours in well-equipped studios with professional photographers, the results were not satisfactory. In the end she enlisted the help of her husband Andrew, a regular collaborator. In part, it was simply a question of natural light: these new images were shot under three large skylights; the photographs of the suicide bombers themselves were all taken outside. But Rajkowska also credits the more intimate and relaxed environment of working with her husband rather than a professional photographer. “I could be myself,” she says, “and not worry about anything. It’s unbelievable how visible we are in our little tiny mental constraints or doubts. Everything shows in your body. It’s like a drawing.”

At first I interpret this as irony – the idea that only when relaxed enough to be truly oneself can one mimic, recreate, occupy the body of the other. But then it occurs to me that this is not ironic at all; this is precisely the point: that there are limits to the ability to transcend, to inhabit the position of the other. Certain divisions, distances, differences, cannot be overcome.  Over the course of making the images, Rajkowska’s process shifted to make this point even more clearly. The first images are dutiful recreations: Rajkowska’s poses mirror those of the dead suicide bombers precisely and, in some instances, you have to look very closely to recognise which photograph is which. But in other images, Rajkowska emphasises the abyss that separates one subject from the other. In ‘Dikwa, 11.09.2016’, for example, the photograph shows a severed leg lying on the dusty earth. In Rajkowska’s reconstruction, she wears a pair of striped stockings, as if having stumbled on a night out. A handbag and metallic sandals lie just nearby. “I used my mother’s shoes from the 1960s to make the image more familiar and more intimate,” says Rajkowska. “And I was trying to imagine that the event simply never happened.”  In ‘Aden 26.03.2016’, Rajkowska extends this fiction a note of absurdity. She lies on the ground reading a book in swimming costume and sunglasses – a stereotypically Western woman enjoying her leisure time in the sun. The book, incidentally, is Svetlana Alexievich’s The Unwomanly Face of War, a patchwork of oral testimonies from Russian women recalling World War II. Alexievich is celebrated for the empathy that her writing elicits. But what can this fictional sunbather really feel of the lives that she reads about? And likewise, what can I, the gallery-goer, really understand of her?  This is the limit at which Rajkowska operates: when language, naming, and that whole legacy of rational analysis start to break. “Living in Britain, I lost my faith in diagnosing the world,” she says. “Because the knowledge and the understanding do not help. People analyse and they diagnose but they do not get involved.” Much of Rajkowska’s work in both the public realm and the gallery or museum stems from the drive to become the subject, bodily, literally, and in so doing to resist the constraints of a purely analytical mode of understanding. “I’m not saying that I’m any closer to the victim,” she says of Suiciders, “but at least I’m not giving you the pleasure of understanding the situation. I’m not trying to understand suicide bombing. It’s not in my hands. It’s not dissected, analysed, described in safe terms – meaning you can intellectually, discursively have it. I’m not having it; I’m leaving it as it is.”

Tom Jeffreys is a writer based in Edinburgh. He has written for numerous publications, including Apollo, art-agenda, ArtReview, Frieze, Monocle, and The World of Interiors. He is currently working on a new book about birch trees in Russian art, landscape and identity.

Death of the Palm Tree
2019, commentary accompanying the project of the same title