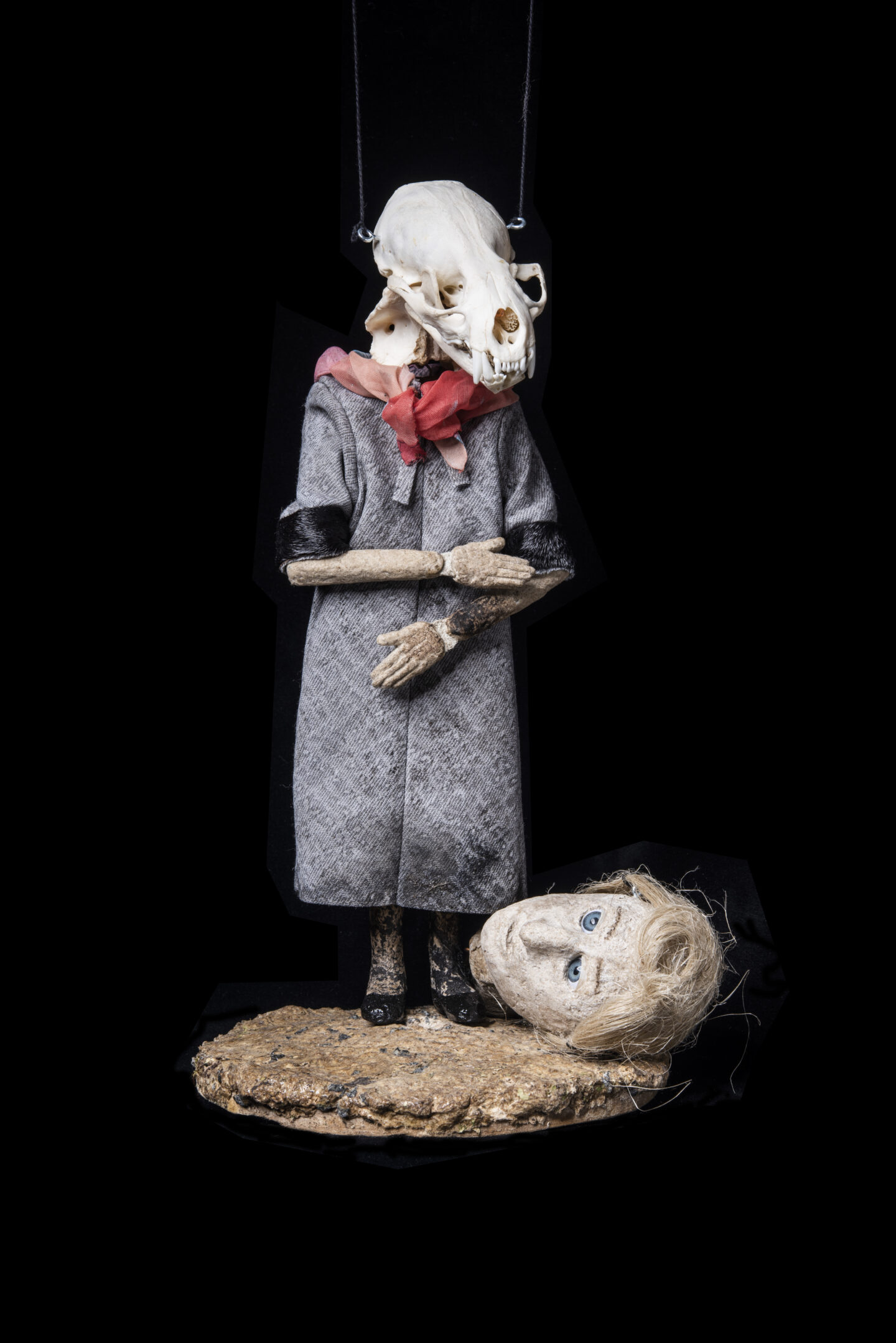 Night Herons is a film which considers the relationship between humans and forest animals – and all non-human nature, represented by Poland’s woodlands and swamps. The narrative draws on Poland’s history and literature as well as on some ancient traditions and rituals – it collapses the past and the present, seeking redemption for atrocities against animals and men.

The film by Joanna Rajkowska and Robert Yerachmiel Sniderman affirms a communion with non-human beings, with the world of animals, and with nature, of which humans are part, not the opposites. Their vision refers to posthumanism, a philosophical direction developed in response to emerging technologies and discoveries in bioscience that have eclipsed the traditional model of the human established by Enlightenment philosophy. It is a vision of a posthuman condition that challenges the concept of man as the fixed center of the universe and the measure of all things. A prominent theorist, Donna J. Haraway argues, “Movements for animal rights are not irrational denials of human uniqueness; they are a clear-sighted recognition of connection across the discredited breach of nature and culture.”1

Night Herons is also a reflection on nature as a silent witness to history. The swamps with their nourishing roots became a shelter for Dzidek and his mother escaping imminent death during the Holocaust – similarly to wetlands nourishing Maroon communities of runaway slaves in the Americas. Yet, nature is indifferent – Dzidek must survive among other living bodies, in the wilderness where night herons, said to escort the dead to the afterlife, hunt after dark. Their anthropomorphization introduces the main theme of the work, referred to in its epigraph “All bodies agree in certain things”2 (Spinoza). In Night Herons – a reflection on human history and timeless nature – the human and animal deaths are one.

Night Herons attempts a translation of human trauma into a non-human one. Dzidek, saved by the swamp, returns there to hunt. His trauma transforms into the abuse of others – his abandoned family and the animals he shoots. The film takes the viewer on a hundred years’ long meandering journey through the histories of two families, both of whom had to leave Warsaw in dramatic circumstances, never to return. Traumas passed down from generation to generation haunt these families compelling their descendant to return to the forest where the story began, to undo the past. They eat the same swamp roots and employ traditional knowledge of herbs to clean the wounds of hunted animals and heal them in an effort to redeem the past. As the ritual of revivification fails and becomes a burial ceremony, it also signifies the mourning of human loss. The climax of the movie echoes the events from the two families’ histories – the scene of washing the body of the dying companion of Dzidek, and the memory of mass graves weighing on old Zelik.

The ceremonial of communing with dead animals brings to mind forefathers’ eve, an ancient Slavic rite dedicated to connecting with ancestors’ souls that inspired Adam Mickiewicz’s Dziady, 1821-32, one of the greatest works of European Romanticism. In Night Herons, the ritual fails, the past cannot be redeemed; the unity with non-human nature cannot be recaptured.

Yet, what follows is another ritual. In the darkness of the night, we witness an eerie circle dance of the transfigured: human figures with animal skulls, or maybe animal skeletons holding human heads in their arms. They resemble human-animal hybrids that populate surrealist paintings of Leonora Carrington (1917-2011). They dance to white voice singing (an Eastern European folk technique of open throat singing). In their dance – outside of the framework of time – human and animal characters of Night Herons become one in a dystopian or perhaps futurist frenzy. In this ghostly vision somewhere in the wetlands of Eastern Europe, the bodies of humans and animals are at one only in death. “A substance which is absolutely infinite is indivisible,” wrote Spinoza.3

In Polish culture, the scene of an oneiric circle dance, with dancers half-asleep, half immersed in the past and half in the future, is potent and familiar. The Straw-Man Dance, one of the most visually arresting scenes of Polish literature, memorable from Andrzej Wajda’s film adaptation of Stanisław Wyspiański’s The Wedding, 1901, is ultimately about lost time. Jasiek failed to blow the horn before the third cock crow and wake the wedding guests from their trance under the spell of the Straw-Man – a human/non-human hybrid. They went on dancing, failing in their mission – to start an uprising to liberate Poland. In Night Herons, it is too late to revive old rituals rooted in the intimate relation humans once had with nature, too late to put an end to the divide between nature and culture that originated in Western religions and philosophies. The people who killed the animals are now also dead while night herons watch the dance waiting to guide them to the afterlife. “All bodies agree in certain things,” according to Spinoza, and they do agree in annihilation.

Spinoza’s philosophical system is fundamental for the reflection on current human condition. We may speculate if human and animal life on the planet could be saved had his idea of radical enlightenment become ascendant over Descartes’s moderate variety. Descartes’ dualistic doctrine of mind and matter, was challenged by Spinoza’s uncompromising assertion of the unity of all that exists and the indistinguishability of spirit and nature. His words “God or Nature” earned him a reputation as an atheist, but Spinoza’s view that everything is a derivative of God, interconnected with all existence has influenced environmental theory.4 Cartesian rationalism, based on the idea of dualism between body and mind, between nature and culture, drawn from a hierarchy in which man alone was the ruler of the planet, eventually produced Modernity, with its notion of progress and capitalist economy.

Spinoza’s ideas were so dangerous for Jews and Christians alike that the Portuguese Jewish community in Amsterdam excommunicated him when “the prince of philosophers”5 was only 23. Issuing such a censure (herem) was not unusual but its language was unusually harsh. In Night Herons, among owl cries and other nocturnal sounds of the forest, human/animal hybrids dance to the words of Spinoza’s herem, “Cursed be he by day and cursed be he by night; cursed be he when he lies down, and cursed be he when he rises up […]. The Lord will not spare him….”6

The film Night Herons was commissioned by the 2020 steirischer herbst festival 19 in Austria, and presented online from October 16 to December 31, 2020. The movie in the cinema version of 4K with 5.1 surround sound, 37 minutes 18 seconds, is an animation using marionettes of human figures, puppets of animals, set design, and props. All the movie scenes were filmed in forest, swamp and lake locations near Nowogród in the Kuyavian-Pomeranian Voivodship in Poland.

Commissioned and produced by steirischer herbst ’20

H. Jacob Zimmels, Magicians, Theologians, and Doctors: Studies in Folk Medicine and Folklore as Reflected in the Rabbinical Response (Goldston, 1952)

Fur used in the film was from second-hand sources or recovered from waste.