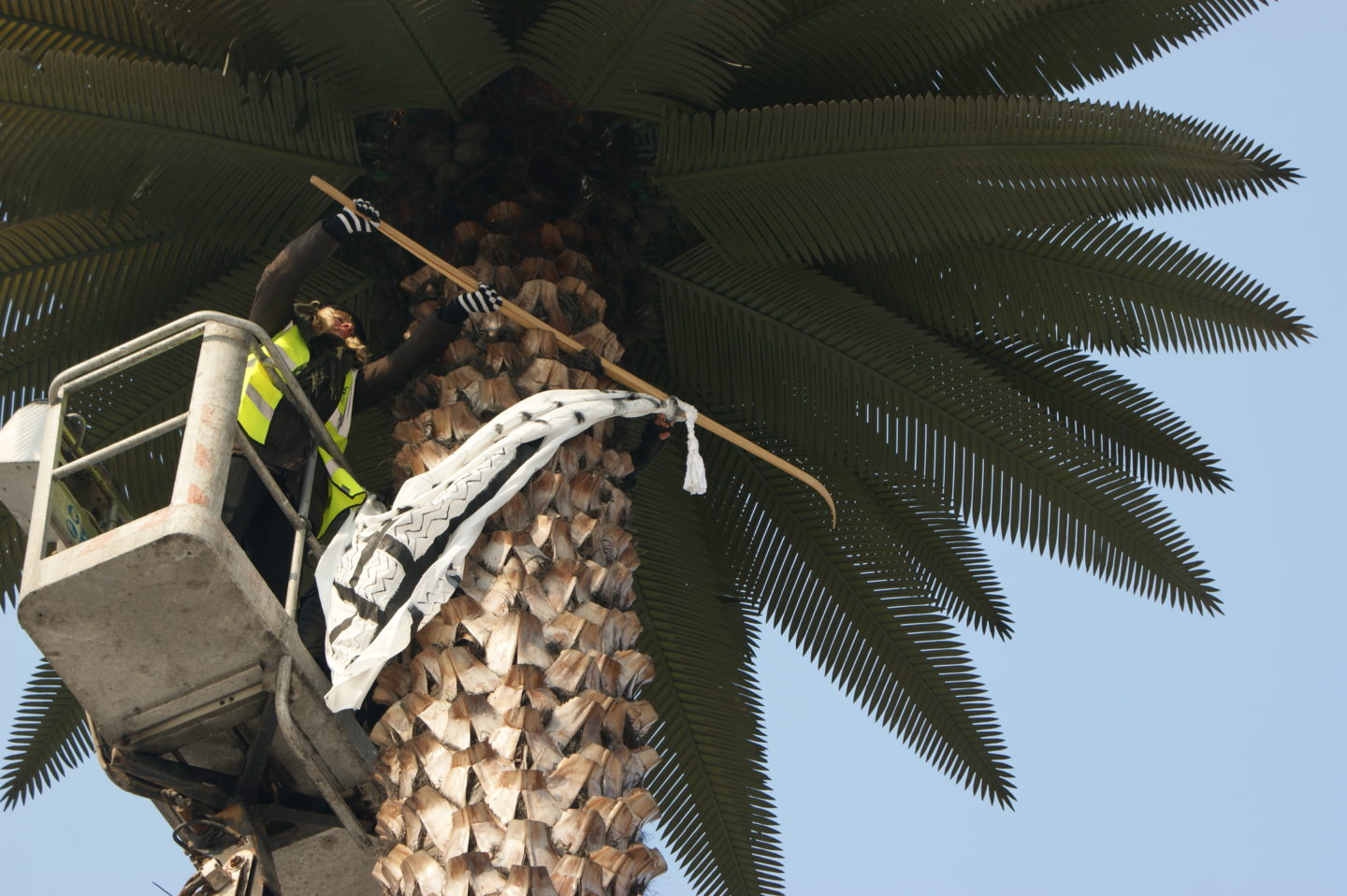 Midnight, June 6th 2012, Warsaw: a roundabout at the junction of Aleje Jerozolimskie (Jerusalem Avenue) and Nowy Świat (New World Street). A 15-metre high artificial palm tree stands there at the beginning of the avenue. Two days earlier, a huge football advertising the European Football Championship was deposited on the roundabout by the Warsaw city council.

A cherry picker stops on the little island of the roundabout and a group of young men with tools climb into the lift and go to the top of the palm tree. They are fiddling with the leaves and, one by one, they are transported down, the tree becoming balder and balder. Around 6 a.m., a banner hangs on the trunk, reading in English and Polish: “Bread not Games.”

Early afternoon the same day, a police car stops at the roundabout and the banner is taken down by the policemen. But the tree remains almost entirely bald with just a few fronds sticking out from its top. It is a miserable welcome for the football fans that have to pass by the tree on the way to the stadium.

Aleje Jerozolimskie is a street whose name is as deeply rooted in the history of the city as the non-extant Jewish community of Warsaw once was, a minority that grew to one third of the population in the 1930s. At the end of 18th century the street led to a Jewish village, New Jerusalem, which survived two prosperous years until jealous Christian merchants and craftsmen sued its founder, Polish aristocrat August Sułkowski, and the village was razed to the ground, goods were confiscated and shops destroyed. The name of the street remained. 230 years later, in 2002, I placed the palm tree at the beginning of this ‘Jerusalem Way’ to mark its name, its lost identity and the tragedy of the Second Intifada. But it was not a sentimental, slightly oversized souvenir brought from my trip to Palestine. It was an exclamation mark that replaced the Christmas tree that traditionally stood there in December. I called it Greetings from Jerusalem Avenue.

Varsovians hated it, art critics thought it was a populist stunt to gain media attention, art institutions didn’t trust it. The palm was a partisan installation, albeit with help from architects and engineers, friends and enthusiasts, so we could not afford to remove it after one year as agreed. After 10 years, it became a political symbol for leftists, free thinkers and other misfits. However, I still maintain the exotic tree, paying rent to the Municipal Road Authorities. The council remains reluctant to support the tree.

The fake palm continues as the scene of political battles against far-right Polish groups. It became a symbol of the painful void left by the Jewish community, but at the same time it triggered anti-Semitic reactions. It served as a site for climate activists action, LGBT demonstrations, a nurses’ strike, a salsa session, art performances, wedding photographs and a context for numerous workshops. In 2011 female pro-Palestinian activists hung a huge keffiyeh around its trunk to protest against the Polish and Israeli governments meeting in Jerusalem (not the Israeli capital) and thus accepting the ongoing ethnic cleansing and Judaization of Jerusalem.

Ironic and deconstructive, the palm tree never stabilized its meanings, which change with every appropriation. Often I am not even aware of performances or actions under the tree. Yet, for Varsovians, it has also become a fantasy of a better life in a better place.

The City, without copyright, also decided to use it in 2012. The short-sighted, neo-liberal Warsaw government saw the palm tree as advertising for the football championship, as it stands en route to the newly-rebuilt stadium.
The huge inflated football landed right next to it. What was missing from the City’s perspective was the historical background, the political profile and the irony of the project. Since massive opposition against the corrupt organization of the championship was already high on the agenda of activists, I decided to give them the palm tree as a weapon. A group called the 10th June Movement prepared a press release and plucked the tree. It was one of the most risky and well-directed political actions undertaken using the project. The palm tree remained bald until the end of the championship.

Whose palm is it?
The action provoked conflict and dismay. But it posed a fundamental question: Whose palm is it? One of the emails I received said: “…in my eyes, you went a long way from an artist to a terrorist, not giving a damn about, contrary to what you say, the good of the city and its inhabitants…. The palm has become part of the Warsaw landscape and as such is no longer the property of an artist but belongs to the whole Warsaw community.”
Who should have power over it? Shall an artist decide about the function and symbolic reading of a public project? Or perhaps a city council, in the name of the city inhabitants? Or a small group of activists? How to draw the line of responsibilities?