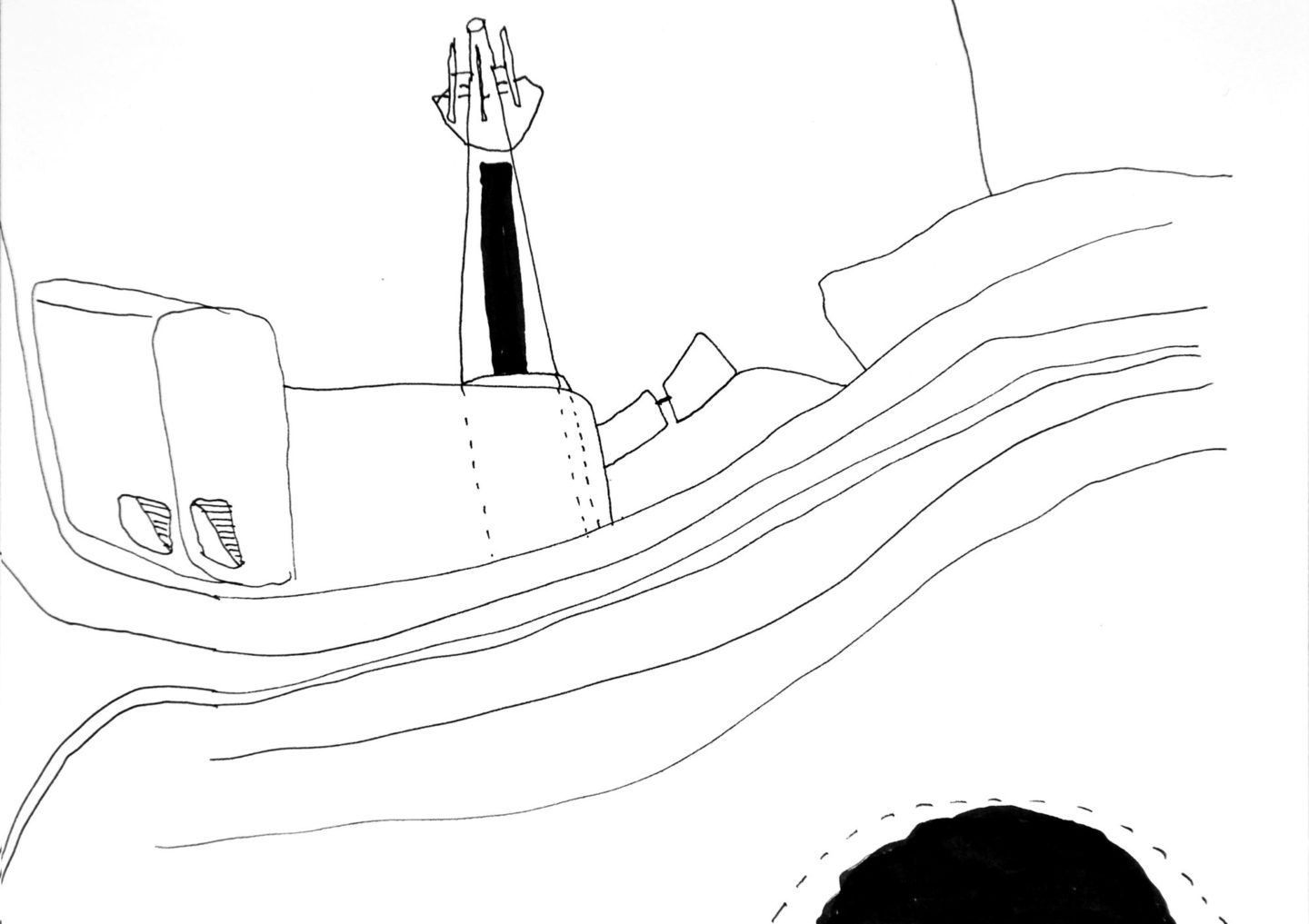 Polish politicians and commentators love to enthuse about globalisation and Poland’s resulting international responsibility. But that is just empty talk. Globalisation is good as a catchy slogan, but when it comes to reducing actual cultural distances, it becomes meaningless. Our responsibility ends when, thousands of kilometres from the Polish borders, with the participation of the Polish military, there happens something that needs to be explained. Then the moralising-imperial pompousness disappears, replaced by concealment and racism-lined defensive reactions. Such as in Poznań.

Joanna Rajkowska was to create in Poznań an installation called The Minaret. Was, because the project met with resistance that may thwart it altogether. An official opinion on the issue was produced by the Competition Jury comprising representatives of the City of Poznań and the local branch of the Union of Polish Architects (SARP). As we can read in it, an object resembling a characteristic architectural feature of the Moslem mosque is ‘culturally alien,’ represents a ‘religious provocation,’ is ‘offensive to Moslems’ (sic!), and its planned location in an axis between a Catholic cathedral and a synagogue is unacceptable from a planning point of view.

When you hear phrases such as ‘culturally alien,’ it is time to get scared. It looks like things have gotten really dangerous because they are not uttered by a pack of aggressive skinheads and not even by the bullterriers of the rightwing press. When we hear from circles as respectable as the city hall and the SARP, we are allowed to establish that they reflect the zeitgeist, that we have to do in them with a spontaneous reflex revealing the framework and deep sources of the dominant way of thinking and popular sensitivity. Today, this zeitgeist smells simply of a pogrom.

It looks like Poznań has developed a taste for the fascist style of Silvio Berlusconi, Gianfranco Fini and other Italian leaders of anti-Moslem racism. In its original version, it is reflected in, among other things, vehement opposition against the building of mosques in Italian cities. The Polish version clearly wants to outdo its Italian precursor – it even bans artistic installations if they only have the misfortune to bring to mind the Islamic religious architecture.

How to react to the charge that a minaret is a culturally alien religious provocation? How to oppose this open display of Islamophobic racism? Argue, convince, encourage dialogue?

It is not worth polemicising with idiocies. Nor should we be deluding ourselves that their authors will be moved by stories about the Polish Tartars, for centuries an inseparable element of the multicultural Polish-Lithuanian Commonwealth, let alone by those about the countless inventions with which the Moslem world helped lay the foundations of Western culture. There is no point in arguing that a minaret in Poznań is very much at home. We should rather ask about the sources of the essentially barbaric reflexes and hysteria that the representatives of the elites of an allegedly civilised city have succumbed to.

The problem does not reside with Islam, Moslems, mosques, and not even with Joanna Rajkowska. It cannot be reduced either to Polish xenophobia or intolerance, because on such a general level it is easy to fall into banality. After all, generally we are politically correct and no one reasonable will subscribe to racism or intolerance (even when every racist begins his argument today with a ritual ‘While I am not a racist…’). Instead, we should look at the specific circumstances of these concrete statements.

For whence the aversion towards a minaret? Whence words bespeaking of prejudices and stereotypes that the 1930s anti-Semitic propaganda would not be ashamed of? Why is it so easy to speak about things Moslem using a language that would be unthinkable in the case of things Jewish or Orthodox? It will be a banality, though a necessary one, to say that this is an effect of a long-time anti-Moslem campaign carried out under the auspices of the American neo-conservatives and their European friends. In the ideological imaginary of the Atlantic right, longing for good ole’ imperialism, the Prophet’s green flag has now replaced the red banner of the proletariat revolution and, like the latter in its time, serves today as a symbol of an international conspiracy against democracy and ‘our lifestyle.’ The ‘Moslem threat,’ meticulously created by an army of propagandists – from academic experts on the ‘clash of civilisations,’ through the Pentagon’s spin doctors, to the producers in Hollywood – represents a convenient pretext justifying the hegemonic ambitions of the US and its European allies. We can no longer ignore this ideological aberration because its practical effectiveness is now measured in the hundreds of thousands killed in the name of defending the ‘Western values’ in Iraq, Afghanistan, Somalia, Lebanon, or Palestine. In our times, anti-Moslem slogans are not but empty rhetoric. These words and images are literally drenched in blood.

That is why the little war waged against the planned minaret in Poznań should not be separated from the real wars that we declare on real minarets in countries thousands of kilometres away from the capital of Wielkopolska. Perhaps the best key to understanding the reaction to Rajkowska’s project is the fact that it reminds us in an unintended way about our participation in armed aggressions against Moslem countries. And that is precisely the artist’s greatest fault. She has violated a genuine national taboo – a taboo on which our sense of complacency depends. A society that thinks of itself solely as an underestimated victim of an unfortunate history refuses to acknowledge that it has for years actively sided with the victors: the executioners, occupiers, aggressors. The truth about the ‘peacekeeping’ feats of the Polish troops on the Tigris and Euphrates and in the Hindu Kush mountains would be hard to bear without the security wall of ignorance and blind eye that we have built for ourselves. The efforts to thwart the minaret project and the arguments used in the process reflect a desire to preserve and reinforce this wall.

The art of wall building is an area where we can learn a lot from Israel, recently an object of unconditional love for our politicians. The government in Tel Aviv has perfected a method of isolating its own society from a people occupied, colonised and destroyed in its name. Although the construction of a wall of apartheid modelled upon that erected by the occupiers in the West Bank remains an abstract possibility in the Polish realities, the wall effect can be achieved using other, more sophisticated means. Above all, by removing from sight all that may evoke associations with the Polish military involvement in the Middle East and Asia. As a result, we avoid the necessity of facing up to the consequences of the presence of Polish occupation forces in Afghanistan and until recently also in Iraq. Moreover, the wall effect lets us dissociate ourselves from symbols (such as the Poznań minaret) that could remind us of the recent keeping of Moslem prisoners in the CIA’s secret dungeons in Poland, in Szymany and Stare Kiejkuty. If Moslems are present in Poland as torture victims, it is obvious we must not allow them to gain a presence in the landscape of our cities.

The outcry against Rajkowska’s project is a reflex whose purpose is to cut us off from any associations with the victims of our policy, while sentencing those victims to functioning solely in a world of ideological phantasms that deprive them of their humanness. The point is also to maintain the conditions of this policy, so that no crack appears on the inhuman image of our Moslem archenemy. The Polish political class aspires today to develop, under the wings of its American protector, our own little version of imperialism (thanks to the particularly favourable conditions we can not only cry ‘Towards Kovno!’ but actually march towards the capital of one country and occupy part of another). The only role Moslems are supposed to play in this imperial project is the one we assign to them – the role of a bogeyman-terrorist-antifeminist that justifies an unlimited preventive war. This will only be possible if we manage to keep them at a distance, that is, if they remain ‘culturally alien.’

Too many minarets have been destroyed in our name in the last couple of years for the political-ideological context of the resistance to Rajkowska’s project to be ignored.

The Museum of Nothing and Other Berlin Legends
2012, Joanna Rajkowska's Swamptown. Sebastian Cichocki

About Power and Powerlessness
2011, Interview by Dorota Grobelna

Who Is Afraid of the Minaret? — Joanna Rajkowska