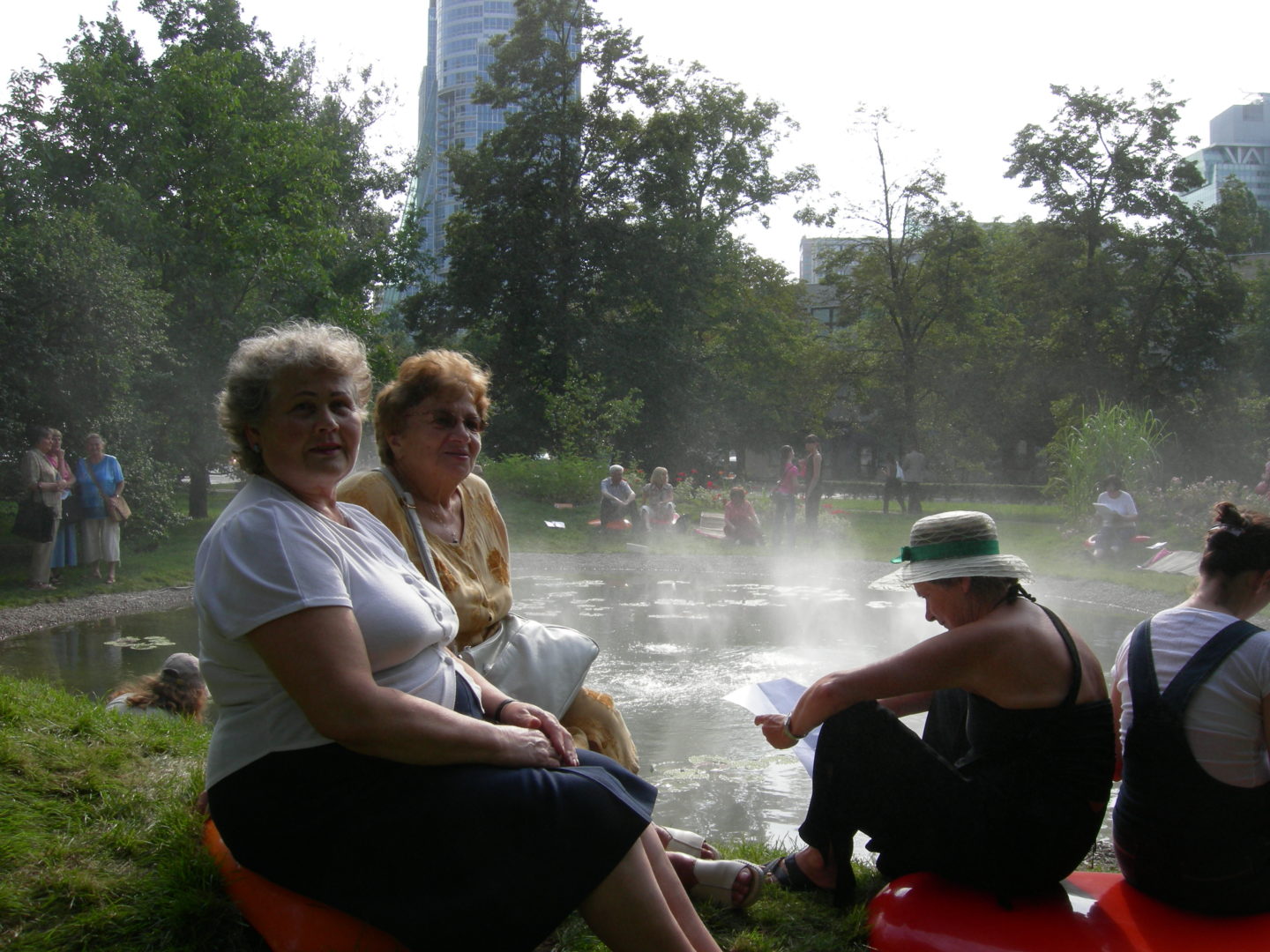 Plac Grzybowski. The centre of Warsaw, the capital of a 40-million nation. A triangular yard whose angles in no way add up to 180 degrees. On the one side, a rather monumental All Saints’ church, in whose cellar until recently operated the Antyk Patriotic Bookstore, infamous for selling anti-Semitic literature. Next to it the Jewish Theatre, and behind it the Nożyk Synagogue and other institutions of Warsaw’s Jewish community. Then modern-era office buildings. Remnants of small shops in which you can still buy pipes, water taps, and rope, repair the door lock in your car, broken by a teenage thief, or have handles fitted to your kitchen cupboards. Two or three high-rise prefab-concrete residential blocks, repainted in the merry, pastel style of early post-1989 Poland. A well-known shop selling paints and glues. A taxi stop. A parking attendant’s booth. Próżna street, that is, the last fragment of the city not rebuilt after the war. Amid all that an almost bare semi-park, semi-square. Among the trees a number of bird guano-adorned benches on which the local winos spend their time, placed alongside dog pooh-speckled alleys, down which stroll elderly ladies with dogs, walking around noisy Israeli teenagers rattling off, under the watchful eye of handsome security officers, the compulsory excursion to the cemetery of their grandfathers and grandmothers. I remember how once, unaware that a friend of mine speaks fluent Hebrew, they called in our direction that we lived in a very ugly country. A bit farther down the road the Austrian Institute, with its quite, for the conservative Warsaw, bold artistic programme. And the old shopping pavilions on Marszałkowska street surrounding it, that is, Warsaw’s cheapest version of the red-light district, impregnated with the smell of kebabs.

I have been living in downtown Warsaw for years. I know very well the most squalid and seedy parts of the nearby district of Wola, that is, the so called ‘Bermuda triangle’, once, like Plac Grzybowski, part of the Warsaw ghetto, and the slightly more pleasant area around Plac Zbawiciela. Thinking about Plac Grzybowski, through which I often pass, I imagine it as a huge bubble full of conflicting narratives pickled inside it. Or as a shabby, stuffy archive full of cobwebs suddenly sticking to your face and hands. The narratives and identities located throughout its space fight with each other like conflicted neighbours. The Jews with the Catholics. The ladies with the winos. The winos with the passers-by. The young with the elderly. The petty shopkeepers and artisans with the capital market. The Poles with the Israelis. Dogged, unable to remember who started and who responded how. The post-war, post-communist backroom of the city centre, a post-transformation back-of-beyond, the capital city’s jerkwater area from which all that is vibrant and alive has turned away.

Into all that Joanna Rajkowska enters with her surreal pond. A renowned, mature artist, author of the artificial palm tree on Charles de Gaulle Roundebout. Following several years of an exhaustive struggle for the tree’s preservation, fully aware of the possible dangers of intervening in Warsaw’s public space. Despite that, she decides to go forward with another project, to make another gesture, a rather empty one, it could seem, as empty as the bubbles of oxygen coming to the surface from the bottom of her pond. What for?

Well, to unblock the natural interplay between the place as an ideal construct, an imaginary system with its own, indisputable rules – and the space as it is actually used. Or, rather, different spaces, activated by different, often competing, not always mutually negotiable, but not necessarily opposed either, practices. As the French philosopher Michel de Certeau would say: practices of everyday life. In this sense, Rajkowska’s project, instead of focusing on the modernistic relationship between the artist and her artwork, concentrates instead on the dynamic relationship between her project and its public, or rather publics, as well as on the potential actions that can happen within the so-defined framework. After all, Rajkowska’s work is not limited to the material object itself, that is, to installing in the middle of Plac Grzybowski an artificial pond with its water lilies, benches around it, bubbles of air, and water spray above its surface. Rather, the artist’s intervention deals with the relationship between the various practices constructing the place, representing an attempt to dynamise the way its space is created every day.

fot. Konrad Pustoła i Joanna Rajkowska
At the same time, this has nothing to do with positivistic vision, with the self-proclaimed mission of an artist going among people with the torch of knowledge, fighting for the quality of people’s lives to improve. Though, of course, it does somewhat, because Rajkowska, as a sensitive person, reacts strongly to aggression, intolerance, or predatory radicalism. Her art, however, is far from journalism, literalness, or from taking the position of an enlightened reason watching things from the outside. The pond on Plac Grzybowski, like earlier the palm tree on de Gaulle Roundebout, judges no one, blames no one, does no one justice, sides with no one, favours no identity, interpretation, or historical vision. The artist does not scrape dog pooh off the sidewalks, does not try to convert the local winos, does not convince the Israeli teenagers that Poland is a beautiful country. The only thing she does is add another element to an existing urban scenery, one, importantly, well familiar to herself, as a Varsovian living nearby. She superimposes on an existing surface something which gives the practices present there a new, unpredictable point of reference, an ambiguous counterpoint. And it is precisely this schizoid splitting of the hitherto cohesive, it would seem, convictions and actions that reveals their destructive, suffocating fixation. Fresh air, let into a musty archive, does not serve to introduce even stricter order and control. Instead, it causes vertigo, noise, and ringing in the ears, a general quivering of the organism suddenly filled with oxygen. In this sense, Joanna Rajkowska does not show how Plac Grzybowski should be practiced to become a positive energy-filled space of the modern-day city. Instead, she simply demonstrates that it can be practiced differently. That one and the same place can be realised in various ways. That it can host various, not necessarily compatible narratives. And that a community living in a single space does not , as the philosopher Maurice Blanchot reminds us, have to mean communion.

Assuming, however, as the artist suggests, that space is neither neutral, unambiguous, nor objectively obvious, it will be worth watching how the Oxygenator functions for the two months of its ephemeral existence. Paraphrasing architect Bernard Tschumi, one can say that the beautiful pond on Plac Grzybowski means nothing without the concrete, everyday practices and actions that will only invest it with meaning.