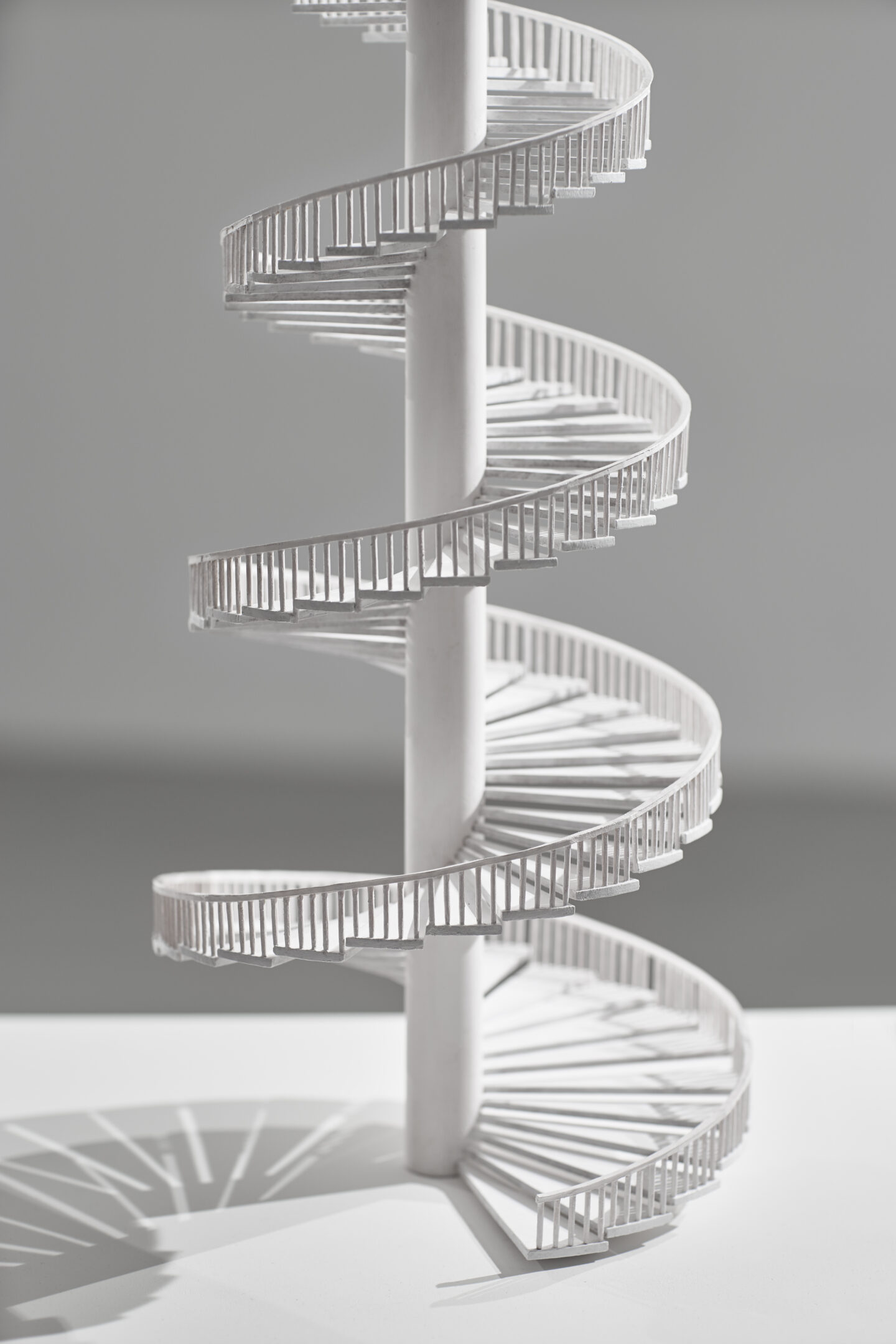 Tower was a response to a request for a proposal in 2014 from the Museum of Modern Art in Kraków (MOCAK). It would have stood 30m high and would have overlooked the Schindler factory museum next door. 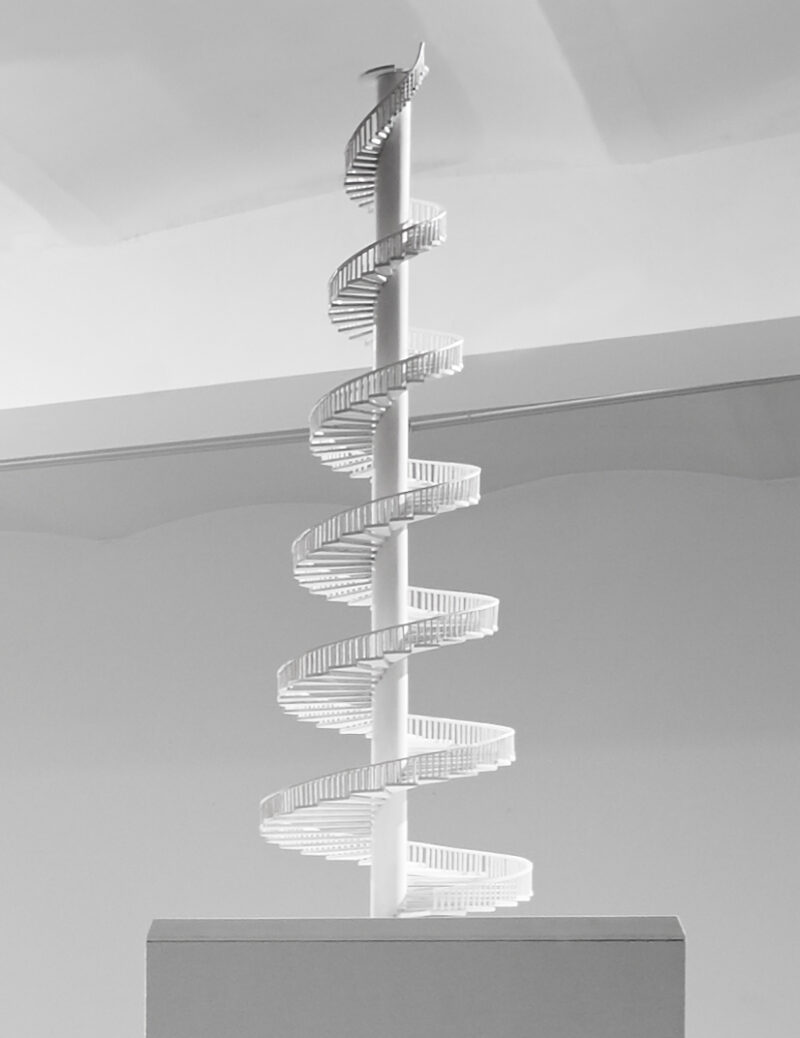 A tower usually represents power: either through wealth or status, or both. Thus, towers are often a manifestation of control – whether benign or hostile. A watchtower is specifically a structure of control. The construction of such a tower immediately next to the Schindler factory has obvious historical connotations.
Joanna Rajkowska’s proposal was intended to pervert the above scenario. As the viewer approaches the staircase, it is a pleasing, almost grandiose, proposition with its wide steps at a gentle pitch. As one ascends, the staircase narrows and steepens, at first imperceptibly, but, towards the top, rather alarmingly. After the last few somewhat unnerving steps, one finds oneself on a small platform – which on the model, at least – doesn’t even have a handrail, leaving the occupant completely exposed and vulnerable. A fine view may be had, but the precariousness of the viewer’s situation is concerning. The tall, narrow nature of the tower might remind us of Simeon Stylites, the Christian ascetic who sought isolation from others. He lived for some 40 years on a succession of increasingly high towers until he died in the one-square-metre space at the top of his 15 metre-high tower. Isolated he was, but continually visible to others. Locals brought him nourishment and revered him greatly as a holy man. As his reputation spread, people travelled from afar to seek his advice. Several would follow his example. Thus, despite seeking solitude, Simeon Stylites found himself in a position of soft power by virtue of his position on his tower.

This project only exists as a model. In the event the tower was not built for more prosaic reasons: for such a tall structure, the necessary foundations would have been prohibitively expensive and it was felt that it would dominate the rather horizontal architecture of MOCAK and the neighbouring buildings. 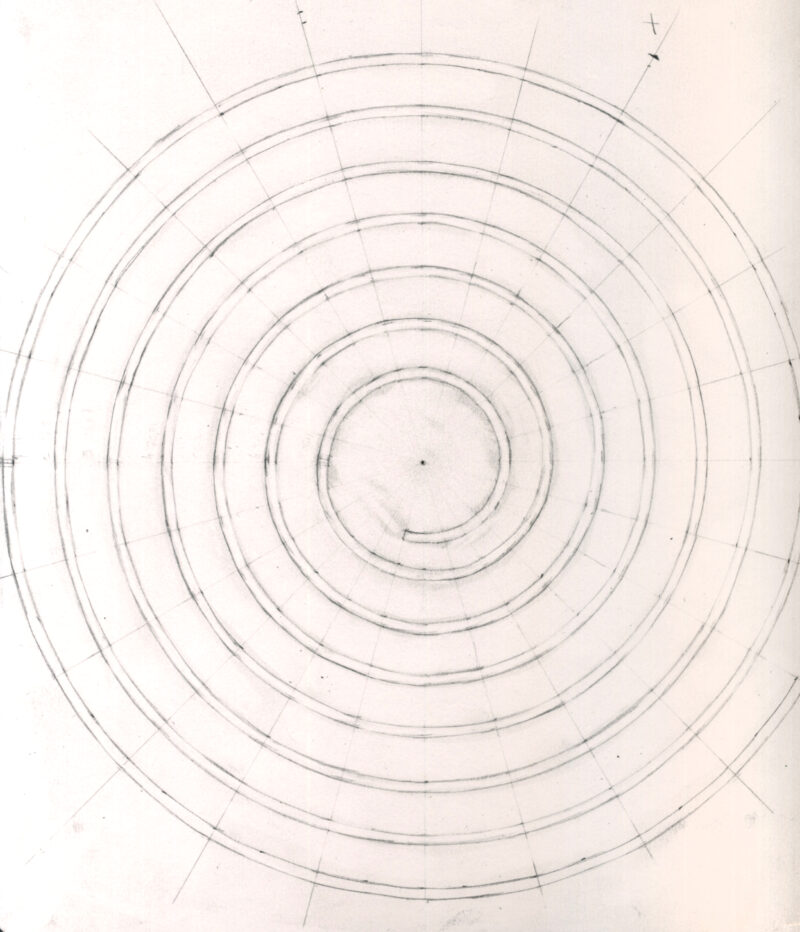 Andrew Dixon, a sketch of the handrail for the model of Tower