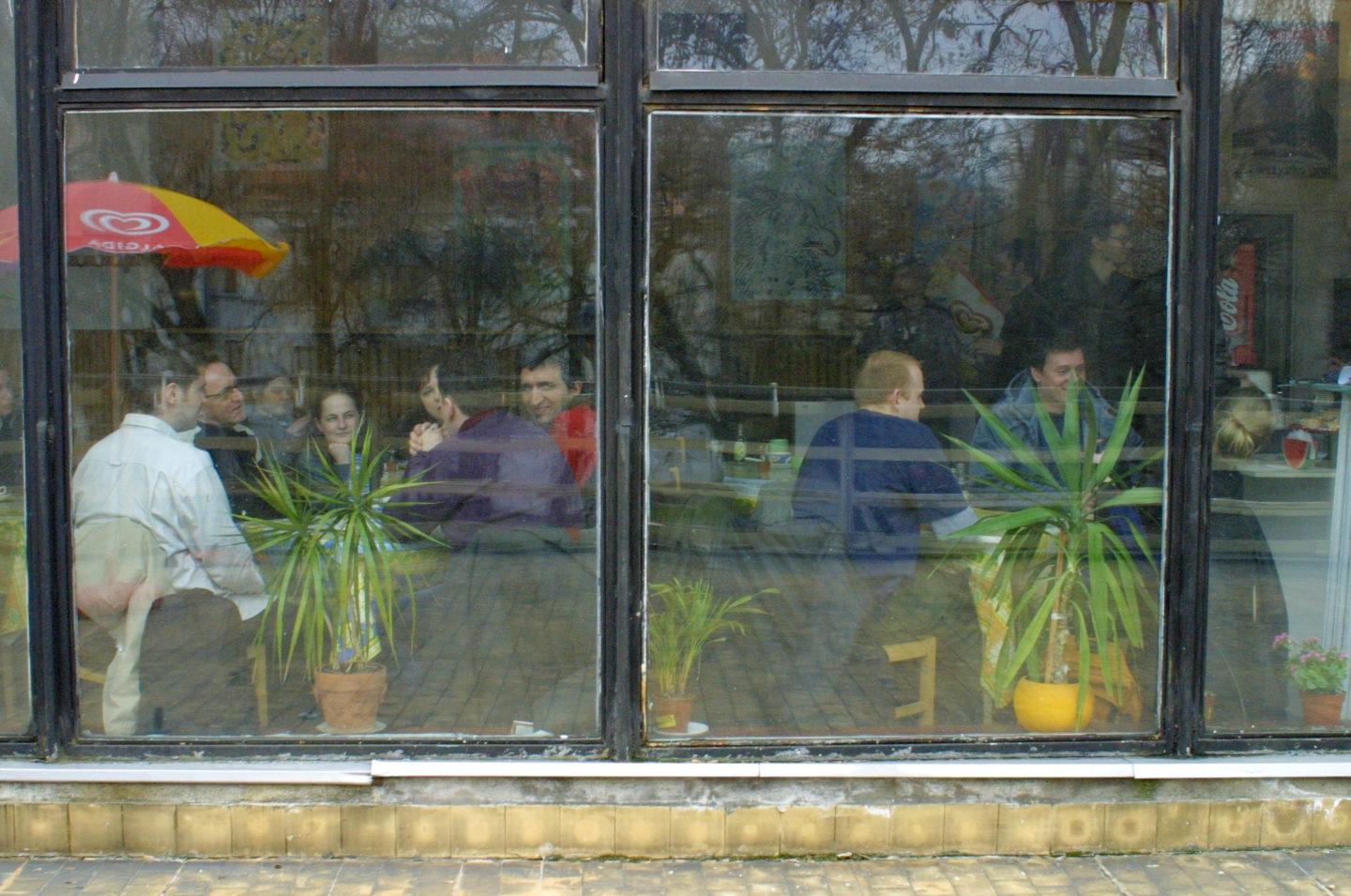 Deserted pavilions, dense foliage ad mysterious footpaths make a rather uncanny impression in the overgrown park by the Wolski Hospital… I had to ask several persons in a row to be directed to the Smaczek Bar. Finally, some hospital staff, slightly puzzled, showed me the pavilion 11 and thus I found the location of your latest artistic action.

How did you find the mysterious place and where did the idea of the action come from?

We had ateliers at the Wolski Hospital in an old, deserted pavilion where the internal disease ward was once located. I treated the place as a storeroom, but I couldn’t work there because the toxins vibrated in the walls. Besides, there was no heating, so the place was really damp. I eventually decided to move my stuff to an old studio in Praga where my friends live and they had nothing against my keeping my things there. During the removal (and it was February), we accidentally locked the key inside the car and stood helpless outside with the dachshund, which felt colder by the minute. It didn’t make sense to go back to the atelier, there the cold was even more piercing, so we started looking for some shelter. I remembered that I had once seen a ‘snack bar’ sign in the area, so we went in that direction. We found a small pavilion, walked up the stairs and saw a brightly lit, warm room full of strange bric-a-brac. The dachshund was delighted, especially that it was actually allowed into the kitchen. It was so excited it stopped reacting to my commands. We spent almost three hours there. It was warm, we filled our stomachs for little money, and we even treated ourselves to a box of jelly in chocolate. The sky outside was dark, rooks were flying in and sitting on the nearby trees. The lady behind the counter neither told us to leave nor asked any questions. She was cheerful and looked perfectly well behind the counter. She seemed part of the place. We felt good.

I thought it would be good to fit the context of a place as well as that woman. To belong to something that way. It would also be good to reconstruct the afternoon, trace back the trail Tofi broke when he carefully viewed and sniffed all the corners of the place, to record and amplify the sounds outside, and to feed others with the same pancakes and dumplings.

Where did the event’s title come from?

From an inscription on the chest of the little china figurine of a black boy. We found it on a shelf behind the counter. The buffer lady allowed us to touch everything. The words ONLY LOVE described perfectly well the dachshund’s delight.

Was it difficult to play a buffet lady?

No, it wasn’t for me. There’s a mechanism in me, an algorithm that clicks in when I find myself in a situation requiring me to play a role, to impersonate someone, to take over doing something from someone. I like such moments, they make me happy. I am relieved to abandon ‘myself’. I speak someone’s language, repeat someone’s gestures, live someone’s life. The fact that I only borrow the outer shell makes me comfortable. Someone gives me a day or a couple of hours of life ‘parallel’ to my own.

Though you had some trouble operating the coffee machine, otherwise you did just great. Did you have an opportunity earlier to work in such a role?

I did. When I was in New York, I worked in a small bar in SoHo, called Lucky. It was a small family business, we sold fruit and vegetable juices with all kinds of weird additions: wheat grass juice, sea algae, spirulin and other bio stimulantslike that, everything for big money. We also served super-natural sandwiches. The work was hard because everything had to be done manually, like mincing the wheat grass in the meat mincer. One day, I remember, the owner of a nearby gallery, a very good one in fact, walked in. I talked to him the previous day but he didn’t recognise me. He looked at me but he didn’t see me. He saw a girl selling carrot juice (asked for double carrot, remember it as if it was today).

How did you manage to convince the hospital administration to support the project?

Well, the snack bar does not directly come under the hospital administration, so it was easier. The owner seems like she likes this kind of thing so she didn’t make any difficulties. We also hoped we would generate some extra business for the place.

Where did the dachshund with the little camera on its back come from and why didn’t it wag its tail (the question was often asked by those participating in the event)?

In part, the dachshund was the reason of the whole thing. Or, more precisely, its delight. It could have been one of the last adventures in its life because Tofi is already 14 years old. So when we decided to recreate all the details of that afternoon, including the sounds outside, the dachshund turned out to be one of the main characters. And it didn’t wag its tail because no one does at the age of 98.

The famous Manet painting – a melancholic-looking woman stands behind the bar, musing. You rushed off your feet: I saw you carrying the heavy stools. How does the world look like from behind the counter of a hospital snack bar?

Your whole energy is directed at the person walking through the door. That’s why I wanted to become a buffet lady for a moment. The mechanism of behaviour is codified and simple: question, answer, service. There’s no room for privacy, and at the same time someone confides his or her intimate human need to you – for instance, they crave for some pierogi! And your role is to fulfil that wish as soon as possible.

The guests went crazy about the black boy figure on the counter. The gilded figurines, paintings, dry flower compositions were likewise very noticeable. Did you interfere with the place’s décor or did you simply treat it as a finished scenery?

I didn’t move a single thing. Nor did I bring anything with me. I don’t create places. They are already there. Everything’s ready and waiting. Only the black boy figure was moved slightly because the action’s title was inscribed on its chest and I wanted to show that even the title was a quotation.

It wasn’t your first action connected with performing simple, everyday activities… I remember your action at Galeria XX1 though I didn’t have the opportunity to witness the one in Berlin. Your practice suggests you like art to be close to the existential praxis and to everyday life.

It’s a function of my need for closeness with other people. Not direct contact, not conversation, not confessions and rummaging in someone’s intimate affairs, but smply the presence of another person. Or a simple relation where someone wants something from me and receives it. Normally people are a nuisance, especially now that I’m a bit ill. They want to talk, they tell stories, listen intently. I feel exhausted after every meeting. I isolate myself however I can. But I miss people. And I search for encounters that don’t require verbal communication.

Edward Krasinski said once he could not even clean his studio because whatever he put his hands into, he ended up making art. If he dropped a piece of rope, it fell in such a way it immediately formed a miniature work of art. Is it difficult to make art as close to everyday situations and people’s lives as yours?

Edward Krasinski probably achieved a state of mind where he recognised every situation as art. I think he knew what he was talking about because I experienced the same thing several times myself. It was a very nice feeling.

I need someone in front of me. That’s why I carefully prepare the context. I wouldn’t call it art; I think it’s a meaning of another order, another kind. I want the person who comes to feel good – the result is a very subtle vibration. Meeting people is always a delicate matter, so it’s not easy.

Your palm tree has become an important element of Varsovians’ everyday life. Hundreds of press reports, a lot of TV coverage and comments you can hear on the street – we have a pretty good picture of what the city dwellers think about it. And how ahs your ‘life with the palm’ been? Still causing you trouble?

It’s been a year and half now so there’ve been ups and downs. During all that time I felt responsible for the project so my perception of the situation is somewhat biased, marred by problems that are in fact marginal. For many months we kept the palm alive with the help of friends, but now that the city has assumed responsibility for it, we don’t even have the right to care for it. The palm is an ownerless project, without a curator, without a decent budget, any real institutional support. Each repair of the crown was a complex logistics project: permits, scaffoldings or lifts, power generators, transportation, many hours of work at heights.

The palm has become a burden. I’d like it to be disassembled as soon as possible because neither the city nor the CCA Ujazdowski Castle nor any other institution will care for it, and I don’t want to watch it deteriorate. The palm revealed a lot of fear and indifference. The most curious thing is that the project has never seen a critical interpretation or even a decent review. In a sense, it remains a social project. I think Greetings From Aleje Jerozolimskie is above all an unfulfilled utopia. But that’s a longer story.

You succeeded where Sir Norman Foster failed. His design company had to bow to pressure from the Warsaw councillors and modify the Metropolitan project. Does an artist working in public space have to be a cunning politician?

That’s possible. But it’s not that I succeeded because I am a politician. It was a coincidence. One city hall administration was going out and wanted to leave the incoming one a nasty present. Mr Lech Kaczyński’s comments made shortly after he took over expressed clearly his aversion and lack of unerstanding for the project. He treated it as a political (!) precedent that needed to be avoided in the future.

About the palm tree
2002, Joanna Rajkowska in conversation with Artur Żmijewski