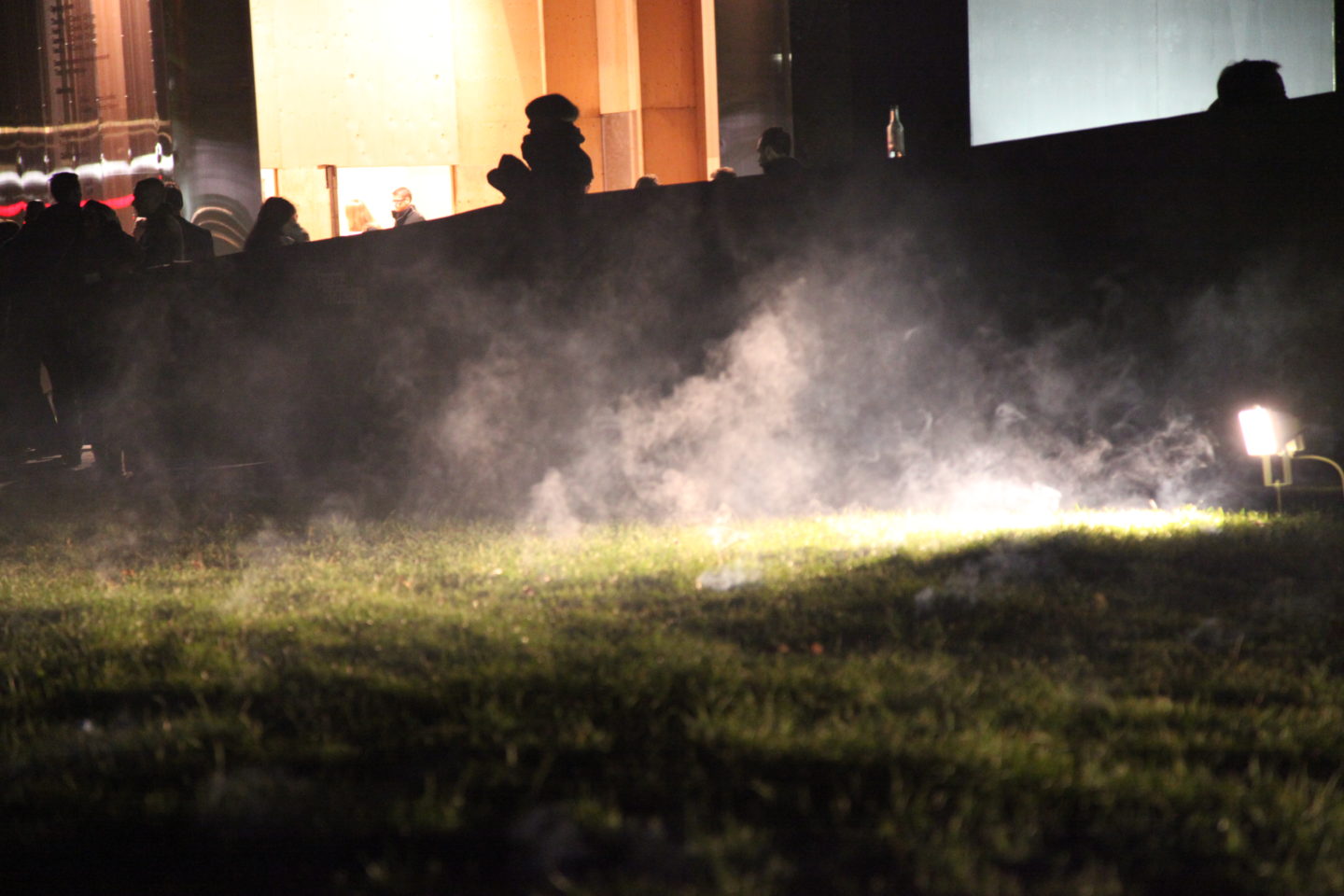 Sarah McCrory: For your project at Frieze London, you transform an area of Regent’s Park close to the fair into a field of smoking incense. How did you develop this idea?

JR: I knew from the outset that I didn’t want to create an object. I wanted to find a way to reflect that omnipresent sense of anticipation that hangs over art fairs: people always seem to be waiting anxiously for something to happen, for someone to come and exchange something with them. It’s not only about the money – it’s more than just pure trade – it’s also about the things that will surprise them, that will prove they are there for a reason, and that that reason is valid. From the start, I had this feeling that I wanted to use the tent and the surrounding area in some way; I wanted to activate it, to make it breathe. Shortly afterwards, I discovered that my baby daughter Rosa was very ill with cancer, and that gave the project a new significance – something much more profound. The sensation of waiting for something consolidated into the feeling that I was waiting for a miracle, for someone to come and tell me what I wanted to hear more than anything in the world: that Rosa would be completely cured.SMcC: I find your referencing of spirituality interesting because it has a complex relationship to contemporary art. Not only does the title of your work, Forcing a Miracle, employ a religious term, but the piece itself involves the burning of incense, which is done across many religions. Incense has a very distinct aroma – even people who aren’t religious can relate to it immediately. Is this element of spirituality a new development in your practice?

JR: To be honest, I see it as a continuation of my previous work. I remember once observing a group of people sitting in Grzybowski Square in Warsaw, which is on the border of the Jewish ghetto, gathered around the pond [Rajkowska’s work Oxygenator, 2007]. They were watching an ozone cloud form above the surface of the water: it was bubbling up in a damp fog and escaping into the air. The people in the square were completely mesmerized: they didn’t speak to one another; they just stood or sat and watched in silence. It was fascinating to see how they became completely in tune with themselves. They didn’t have to communicate with anyone else: they could just watch and breathe and become perfectly conscious of their own bodies. At the same time, the same people created a surprisingly coherent little community. The cohesion came from breathing, from profound physical pleasure and not from, let’s say, any political consensus. Witnessing that scenario was an incredible experience. I thought: if I’m ever able to induce a moment of singularity like that again – to allow someone to be completely themselves in a particular place in a particular moment – then I will have created one of these extremely rare instances of intensified experience, intensified presence, that art can sometimes generate. When I thought about all the people that would be coming to the fair from around the world, it struck me that this was a cultural situation in which it would be possible to direct human behaviour, to shape it almost. My hope for this project is that visitors will sit or stand on the grass and just watch the incense burn and see the smoke rise – and, in that moment, become completely at one with themselves.

SMcC: Art fairs tend to be contrived and controlled experiences, and visitors have certain expectations of them. What I find exciting about your project is that, experientially, it will remove people physically and mentally from the fair. It’s interesting that, although you’re going to set up the scenario, ultimately you won’t have much control over how people respond.

JR: That’s one of the major elements of my practice: I consciously refuse to have control over my projects because I think that if you’re craving control over the audience you aren’t giving them any credit. You have to leave everything open so people can choose to feel one way or another. You don’t have to set the direction; you’re not running a kindergarten. Another major aspect of Forcing a Miracle is to go beyond social rituals and put people in a situation where they don’t know what to do with themselves. The fair is a highly ritualized situation – every gesture belongs to a certain expected choreography. And then you have smoke, which blurs expectations and which you can sniff and hide behind.

SMcC: Land art, which your project references, has tended to be a male-dominated sphere, and the gestures it involves – hole-digging, earth-moving – are all predominately masculine. You have less of a domineering relationship to the land. By putting incense into the ground, it’s almost like you’re allowing the earth to breathe, opening it up.

JR: I’ve been making public art works for over ten years now, and I realized quite early on that the appropriate point of departure for my work was a feeling of helplessness – which is to say it’s not about what I can do, but rather about what I can’t. Land art doesn’t have to be about using heavy machinery or major construction sites: you can create a very powerful effect with a minimal intervention – a fata morgana. Ultimately, what I like about Land art is that it overwhelms you and makes you feel really small. That’s exactly how I feel myself when I embark on a new public art project. I have to deal with this uncontrollable organism of the city I’m going to be working in, but I can’t ever really grasp it – it’s beyond my comprehension. And when the work is finally unveiled, it seems to carry more meaning than you can understand. But you can feel it, and other people can feel it too. That’s what I love about public art. With this project I wanted the ground not only to breathe; I wanted it to burn. When you have a child that in her devilish innocence and joy is losing her eyesight, you burn – you literally burn your tissues from inside. I wanted to reenact it in soil. I wanted London to burn and cry with me.

SMcC: There is a great sensitivity within your practice, since, as you’ve already mentioned, you’re not looking to force a reaction from people. Of course, that then leaves your work open to failure. How do you feel about that?

JR: It depends, because sometimes the failures are fantastic and sometimes they’re really embarrassing. I generally love failures as they are so genuine and naked. And they make me laugh at myself.

A Tourist in Other People’s Reality
2013, Joanna Rajkowska interviewed by Alessandra Ferrini

I Wanted it to Burn — Joanna Rajkowska