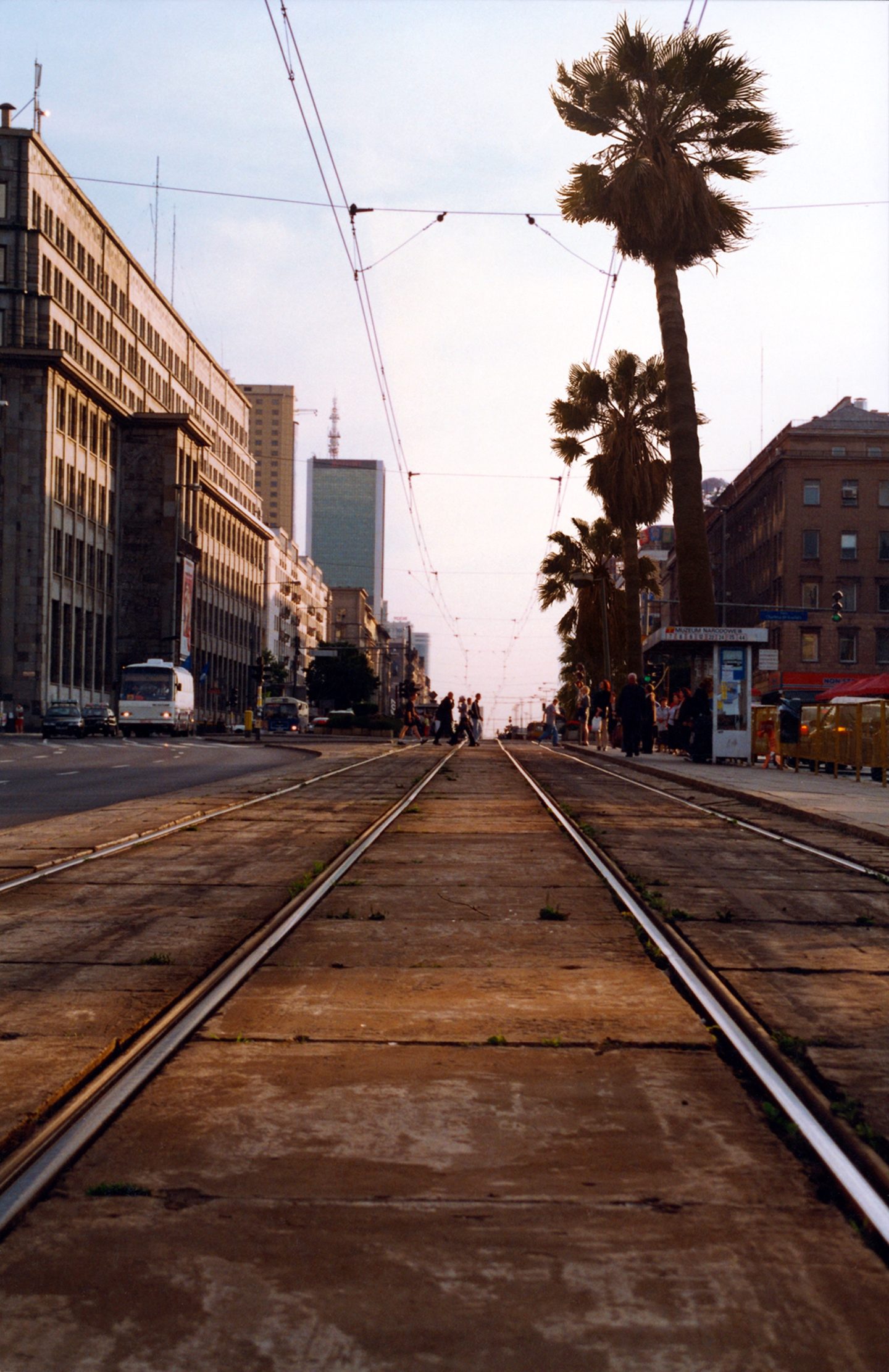 Artur Żmijewski: Tell me something about your trip to Eretz Israel. Was it a special one? If so, then why?

Joanna Rajkowska: It was a trip without a purpose. When the purpose of the trip is not specified your views on many things become clearer. You are simply a newcomer and not an artist with a mission to make an exhibition, as is usually the case. You don’t move within an artistic ghetto, you simply wander here and there. Israel was also special because it evoked so many hell-born emotions. I remember my arrival in Jerusalem and that weird situation in Faisal, a little hotel. In there was a glass-enclosed tea room, with music implanted from the West, where everybody gathered; a very cool place. But Moby, when through the windows one could see Israeli helicopters hovering over Bethlehem, sounded strange. It was an island floating over Eastern Jerusalem, an island where one smoked shisha, ate guacamole and felt a growing isolation. I didn’t feel myself a part of that tea room. The people on the street seemed somewhat closer to me than the globetrotters from the hotel.

I remember the arrival of the Arabic-English interpreter who was working in the camps for the Palestinian refugees who projected something totally different. He projected total helplessness. When I talked with him I felt the inability to gather together what he experienced in a coherent system. One experience was subject to one logic, another one to a different one. Those logics were conflicting and I felt like they ploughed in my head separate channels that, like parallel lines, couldn’t cross each other. What do you do with that? A stay in a country like Israel – as you get acquainted with an ever larger number of facts – is ever less understandable. I also remember the need for a vehement protest in Mea Sharim, a district of Orthodox Jews. I didn’t care that it was very much like a Polish stetl. I looked at the women who were pale like vampires or ghosts and the men glancing at me with aversion. I didn’t understand the rules of that world and felt that they targeted the rules of my world, piercing them, as if they laughed at them. That protest was so strong, so toxic that I had an idea: to lie down on the street, across the sidewalk. Only when you took the picture of some Chasidic Jew who wanted to hit me (still lying flat on the pavement) with his cane, I got over it. And, finally, fear. I didn’t fear anything concrete: suicide assassins or bombs. I felt fear because fear was in the air. I remember the first evening in Jerusalem on the bed in the Faisal Hotel under a blanket that stunk terribly of human sweat. I couldn’t sleep and couldn’t move. I was completely paralysed with fear. I felt that my skin, by way of osmosis, absorbed fear from the environment and that I would explode soon.

AŻ: The palm project was created as a result of a joke, a non-nserious question: how would it be if a line of palm trees appeared on the Jerusalem Avenue, just like on the streets of Jerusalem. Can you assign – as in the case of the palm – a “monumental” scale to such small imaginations? I think that your other works were also created as the result of such small caprices of your imagination. Small things are important. Why?

JR: You know … sometimes even children are created from small caprices of one’s imagination. I trust those thoughts that push me out to a different orbit, make me feel as if I were in some movie. No matter if they are small or large thoughts. Most often they happen to me in the presence of somebody, during a conversation. Something activates inside of me then. A small wave into cosmic space. I observe how that someone reacts, whether they let themselves be lifted by that wave. Outside that, one has to verbalise that wave then, somehow make it real. And then – a thought grows inside me like a bubble or I forget about it immediately.
When the palm was created we were writing about Israel; it was hot and somehow chaotic. I really forced my brain to invent the end and, as I remember, it wasn’t the first idea. But then, I short-circuited inside and the frames of memories from Warsaw and those from Jerusalem, for example from the plaza in front of the Faisal Hotel, where we lived, superimposed on one another. And one more frame: a postcard that you found in the Old Town district in Jerusalem. There was a bald hill and on it a poor, rachitic palm. And below, a sign: “Greetings from Hebron” or simply, “Hebron”, I don’t remember for sure. It impressed me. It looked as if it were printed in Poland somewhere, in the 80s.
The monumental scale of the project results exclusively from the size of the misunderstanding, from the size of the area beyond comprehension; but that’s what the palm is about.

AŻ: Aleje Jerozolimskie (Jerusalem Avenue). You used to live on that big street in the very centre of the city, you lived through various things there. The name is close for you. Tell me about that closeness.

JR: For some time, that closeness was very painful. I tried not to pass through that area, since it was beyond my power not to look at the windows of the flat where I used to live. And when I looked at those windows, it was painful. In 1999, I found the flat at Aleje Jerozolimskie and I wanted to live there with my husband. Later, while living in it, I decided to divorce him and lead a life that would be different from the one I had until that moment.
The weight of those decisions frightened me. My reaction to them was a growing separation from everything around me; I had to move out. Since then, Aleje Jerozolimskie constitutes for me a threshold area, a private custom clearance from one life to another.
It is also, in a different dimension, a sign of our history: through the capital city of a large country in the Central Europe runs a wide artery: Aleje Jerozolimskie. Its name is so knitted together with our culture that nobody hears or comprehends it, nobody hears the meaning of it. I think that’s very good.

AŻ: Do you think anybody in Warsaw remembers the meaning of that name?

JR: I don’t think so. That’s a strange story. In 1774, August Sułkowski established a district for Jews in the area of today’s Towarowa street: a new Jerusalem. Its inhabitants very quickly became uncomfortable competition for the local merchants and craftsmen. Sułkowski was sued by the Warsaw magistrate. He demanded liquidation of the new Jerusalem. On January 23, 1776, goods were confiscated and the houses of the district were razed to the ground. At least, that is what I read in the books *. That history disappeared in the sea of Polish calamities but the name remained.
Reportedly, the people from Między Nami cafe started to comprehend the name of that street when they saw the postcards with the palm titled: Greetings from Jerusalem Avenue”.

AŻ: By placing such a large, exotic tree in the middle of the city you transfer from that tropical world something that you miss here in Poland. Is that true? Something from there? What is that?

JR: I miss the diversity of that world. I miss the Jews whose absence is evoked by the name of that street in an obvious way. Not some small group of assimilated people. I miss the people who are, in the very meaning of that world, different, demonstrating their being different without embarrassment, but also without aggression. I miss both the Jews and black, African people in the same way. I miss the energy of the emigrants who decide to leave everything and start their lives anew; their restlessness and strength. Maybe because of those longings I feel so good at the Bazaar Europa**. Poland is hopeless as regards that issue. A white catholic society, similar behaviours and similar convictions. That quiet understanding is horrible, that “normalcy”. There are no minorities or majorities whatsoever, there is only a richer or poorer homogenised mass. Maybe that’s where Polish racism and intolerance come from. I don’t say that Israel is the land of tolerance; I think that it is also a racist country, only in a different way, for other reasons… Outside that, Israel is in the process of forming itself all the time, in any regard. It is a country in which every thinking man has to ask himself fundamental questions.
I also miss the tension. I miss the communication with the rest of the world so obvious in Israel. Poland is a ghetto in so many regards that sometimes I lack the air.
I plant the tree and treat it as an element of communication between the people, communication that is not verbal or intellectually engaging. Just like in the Diary of Dreams, I don’t want the people to “understand” one another. I think that’s impossible. I want them to BE next to each another. Under the palm tree.

* Jarosław Osowski, Warsaw and its Streets. On the Origins of the Names, 1999.
** Bazaar Europa is a huge black market in Warsaw

A Fallen Woman. On the street
2008, Ewa Małgorzata Tatar

About the palm tree — Joanna Rajkowska