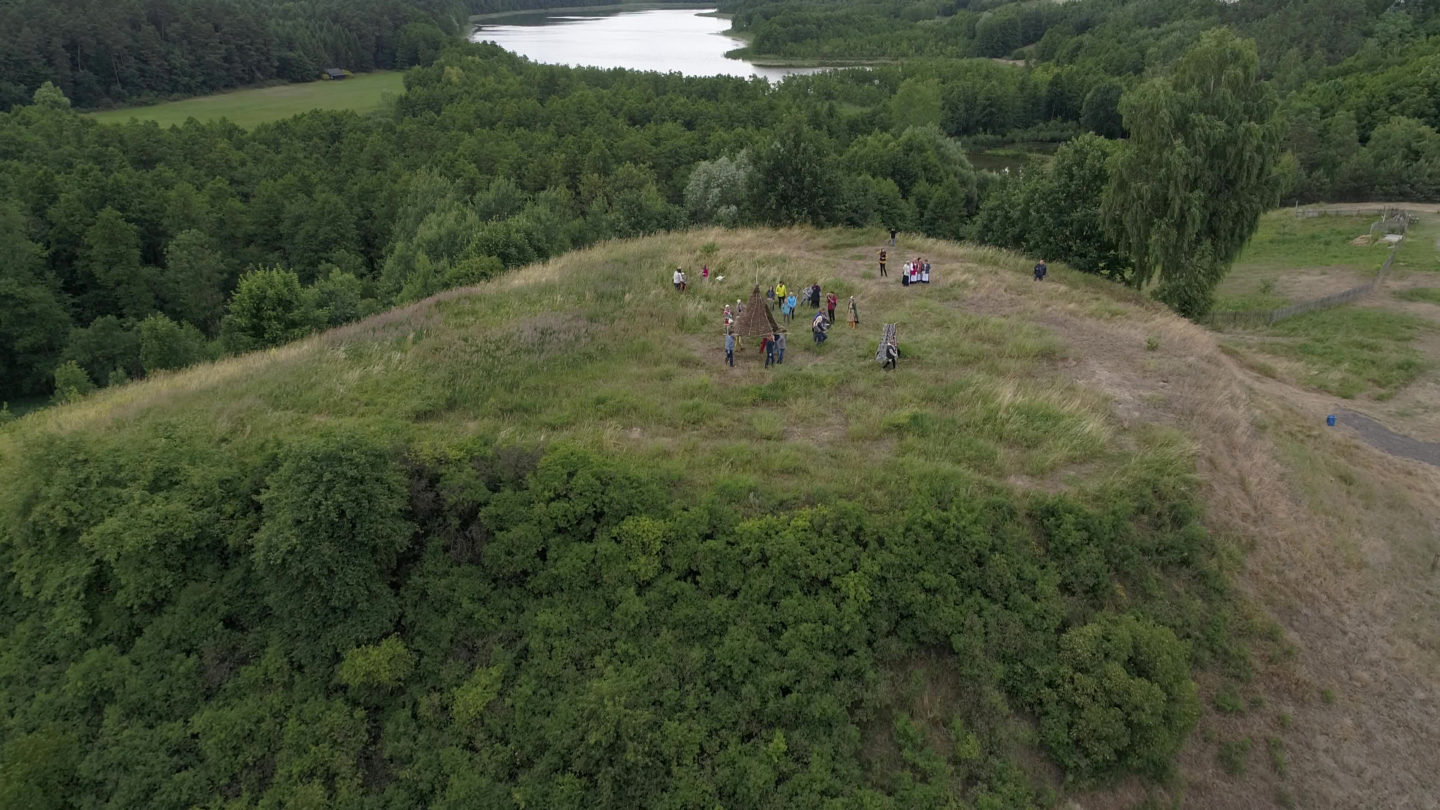 The project Solstice was created in cooperation with Alicja Wysocka, who started by running some macramé workshops in the area of Golub-Dobrzyń (in the villages of Nowogród, Paliwodzizna, Macikowo). During these sessions, the artists and the women from the Country Housewives’ Clubs (Koła Gospodyń Wiejskich) decided to initiate a project related to the mysterious mound which is located in Nowogród.
This distinctive mound is, in fact, an early settlement (grodzisko). For many local inhabitants, it is an important reference point – historical, landscape and cultural. It is a local treasure and for some – a local chakra.Grodzisko, locally known as “the rampart”, situates the village of Nowogród and its surroundings on the map of early medieval Europe. The ceramic material found there indicates that it was inhabited in the first half of the 11th century, but archaeologists have also found traces of a settlement on the mound from the Iron Age Hallstatt period. According to historians, it was called “Grodno”. This term survived only in the name of the lake beneath the mound and the village. At some point, this area was abandoned by its inhabitants and the historical continuity of the place was interrupted. Another settlement near the lake was called “new settlement” – Nowogród – which etymologically indicates the connection with the fortified mound. Nowogród, therefore, derives from the settlement. Both Grodno and Słupno lakes reveal traces of Paleolithic and Neolithic activity, indicating a presence in the area of today’s Nowogród village.
The current shape of the mound, flattened by time, modern ploughing and constant erosion, seemed to call for completion or an accent at the top: something that would serve as both a shelter and a chakra. Thus, a cone-shaped hut was created, built with traditional methods from the branches of willow, birch, alder, plum, bird cherry and ash harvested around Grodno and the village of Nowogród. 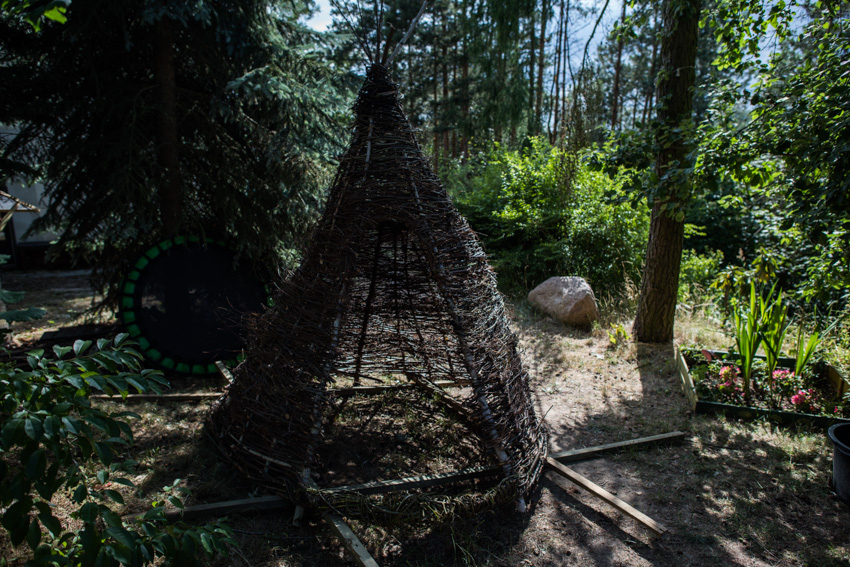 Longer branches forming the cone’s structure were entwined by hundreds of thinner branches horizontally. The hut has a low, semi-circular entrance.
In the Slavic tradition, the shortest night of the year is celebrated in June as the Kupała night. This pagan ritual, the feast of fire, water, sun and moon, was combined with a trip to the mound and thus the celebration of the thousand-year settlement tradition in Nowogród. 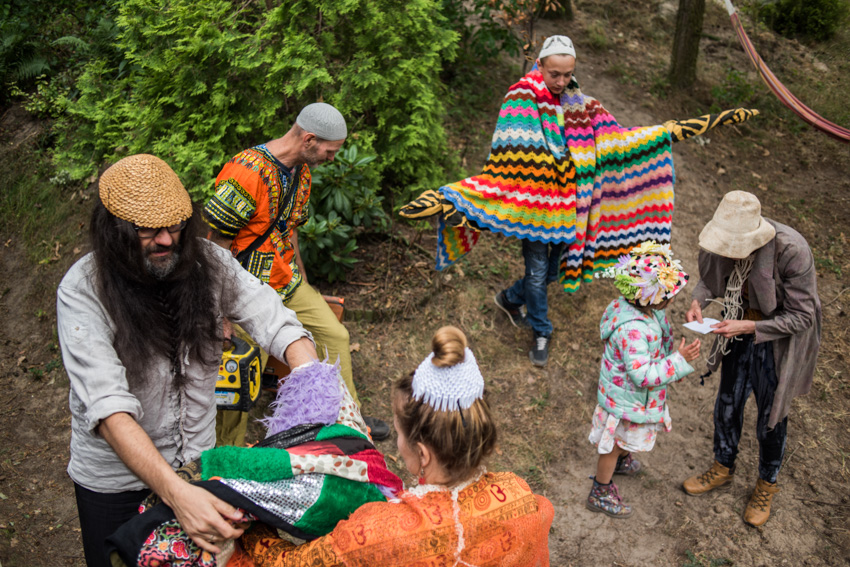 The event began with a procession to the mound led by a banner woven from macramé, followed by the hut, carried on the shoulders of the participants. After arriving at the top of the mound and placing the sculpture there, the participants burned local, traditional herbs to symbolically expel bad energy, all the while whispering their wishes. One of the most important elements of the whole ritual was music with traditional Eastern European “white voice singing”.
As the mound is privately owned, the hut could not remain on it, so the procession once again raised it and  removed it to the village school, where the next part of the ritual took place. It was covered with daub – a mixture of clay, straw and cow dung – a traditional method used in prehistoric construction. The hut became a symbolic refuge: a place, a building and a sculpture at the same time. 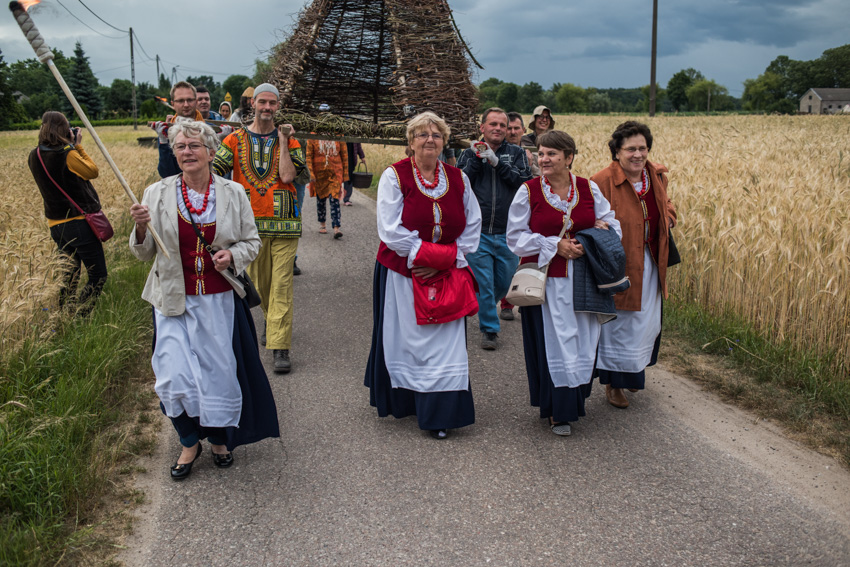 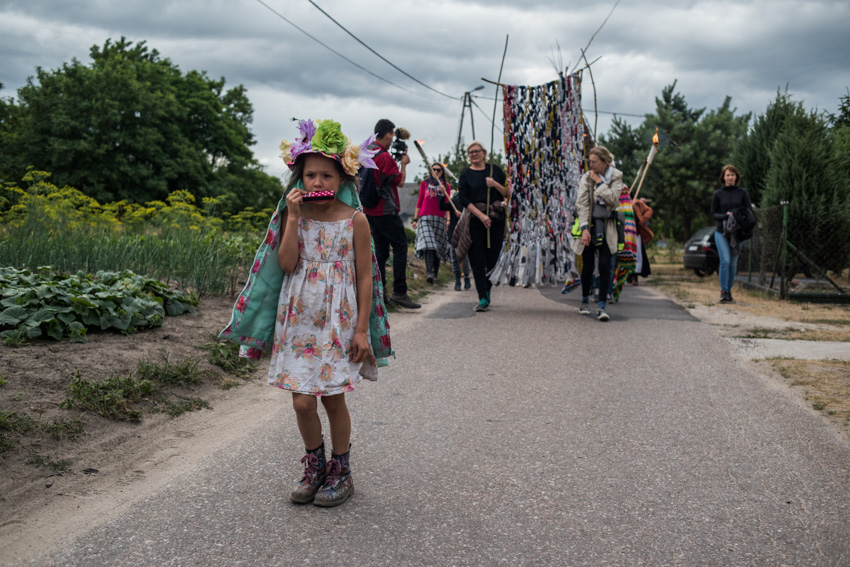 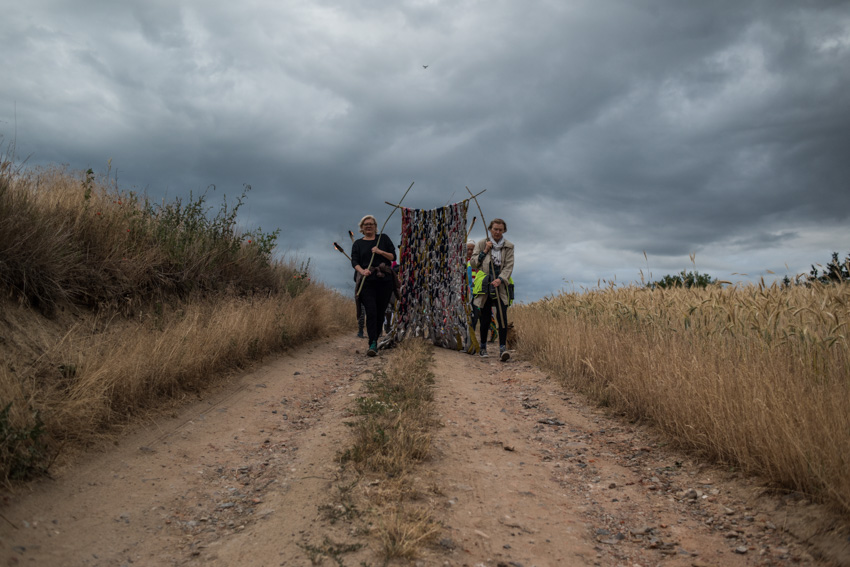 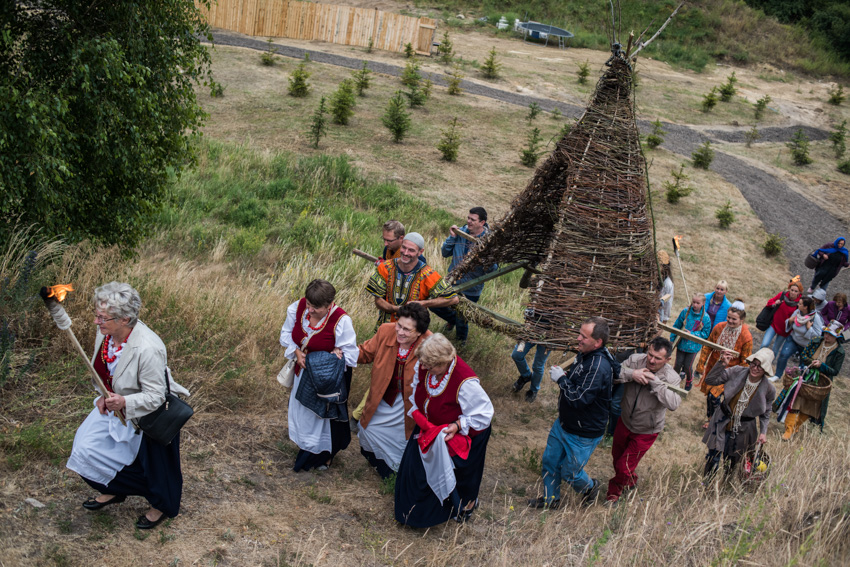 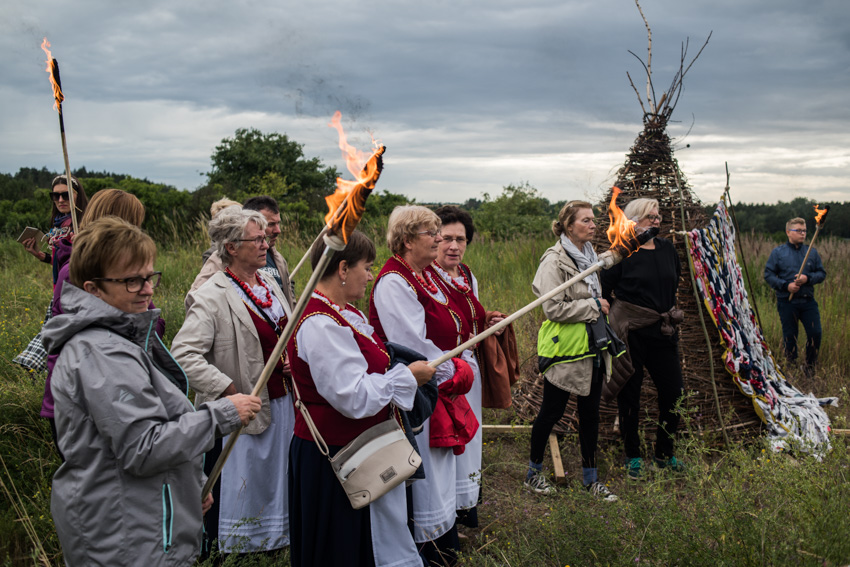 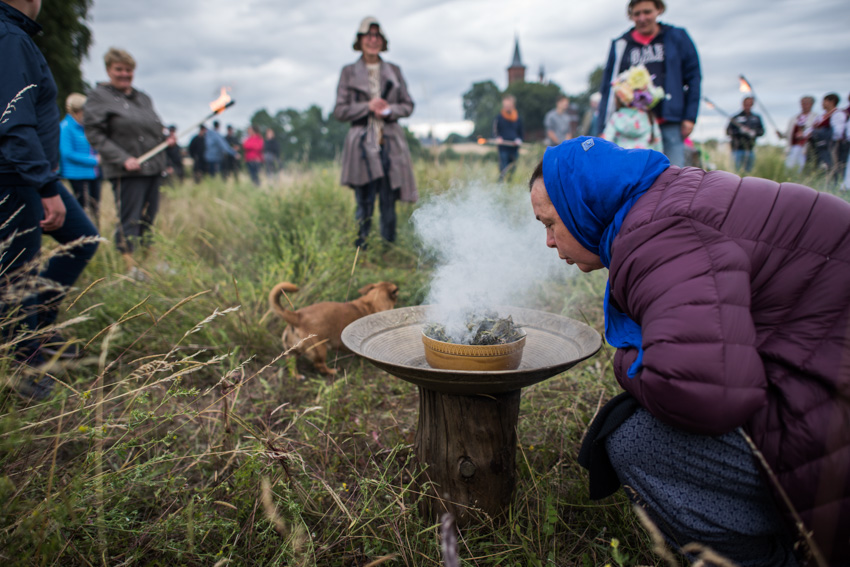 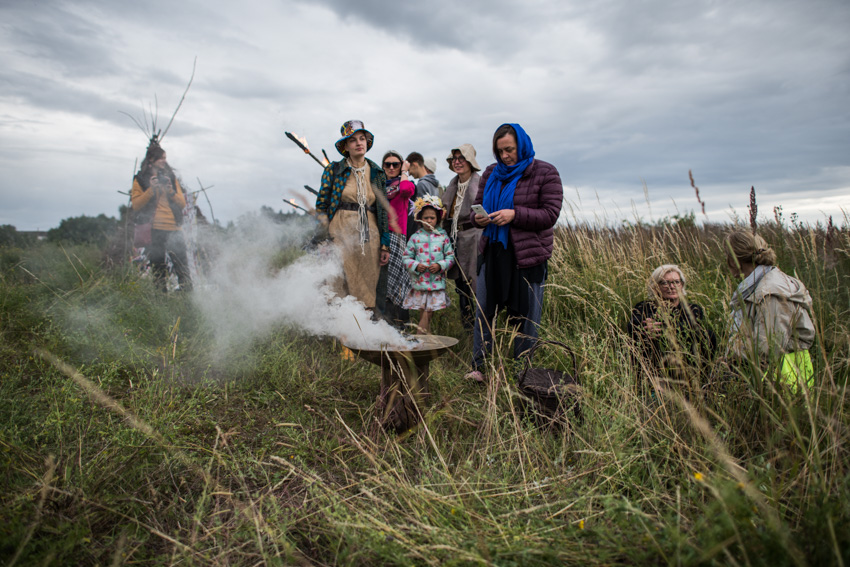 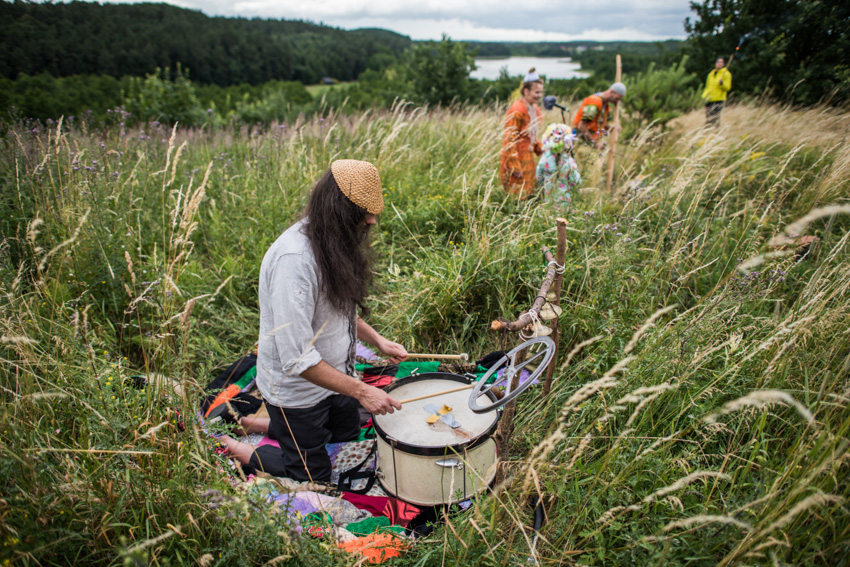 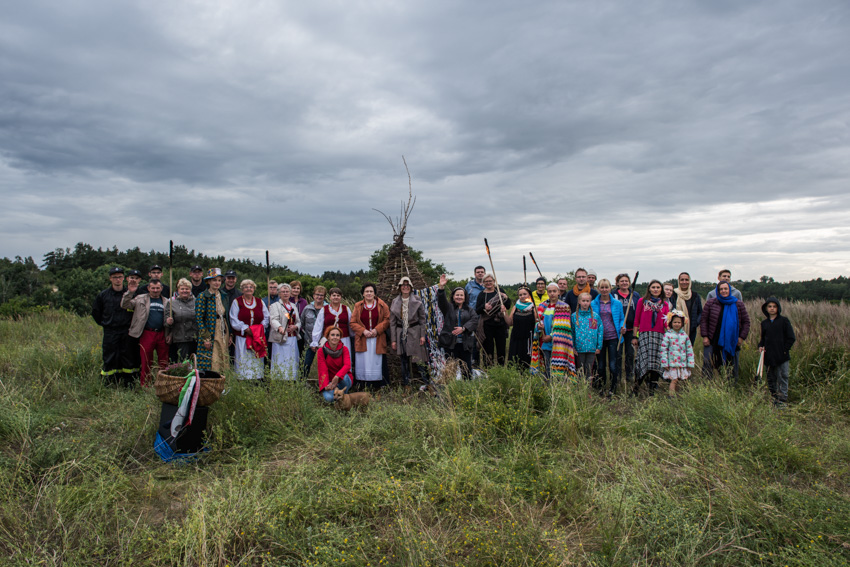 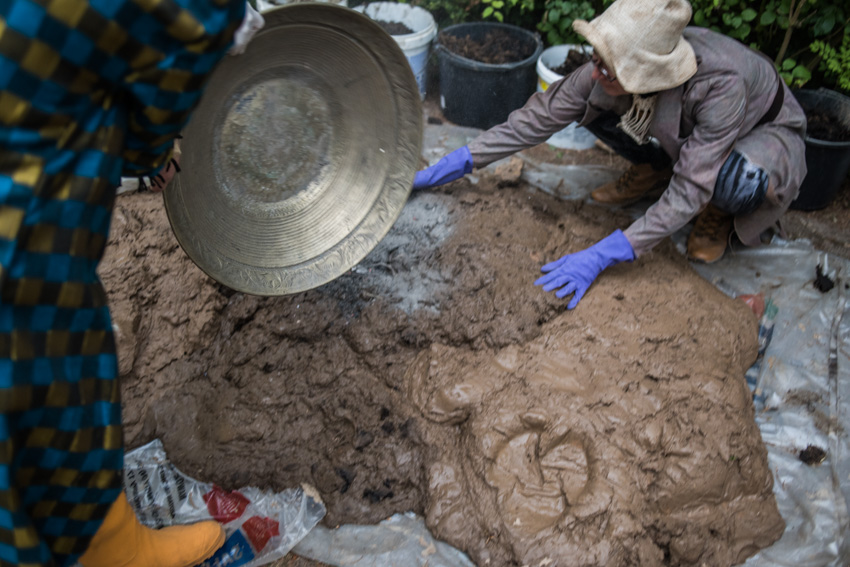 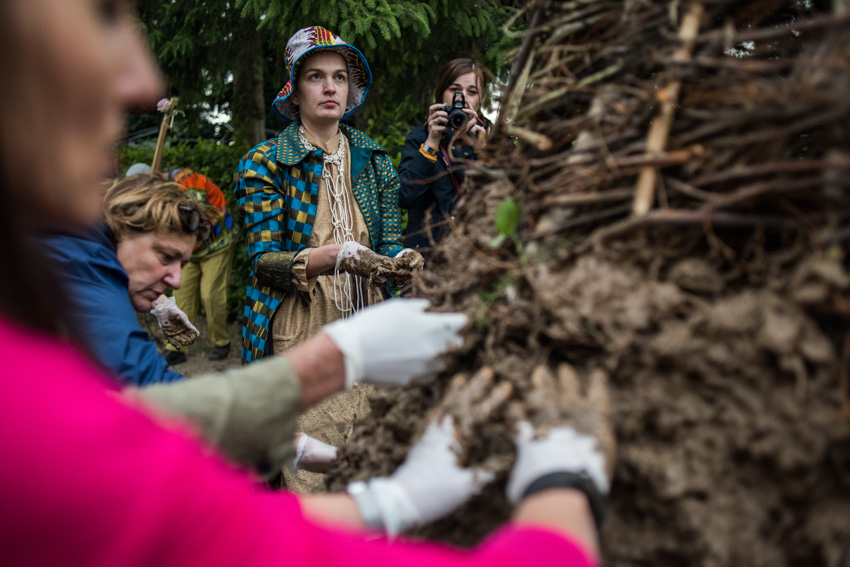 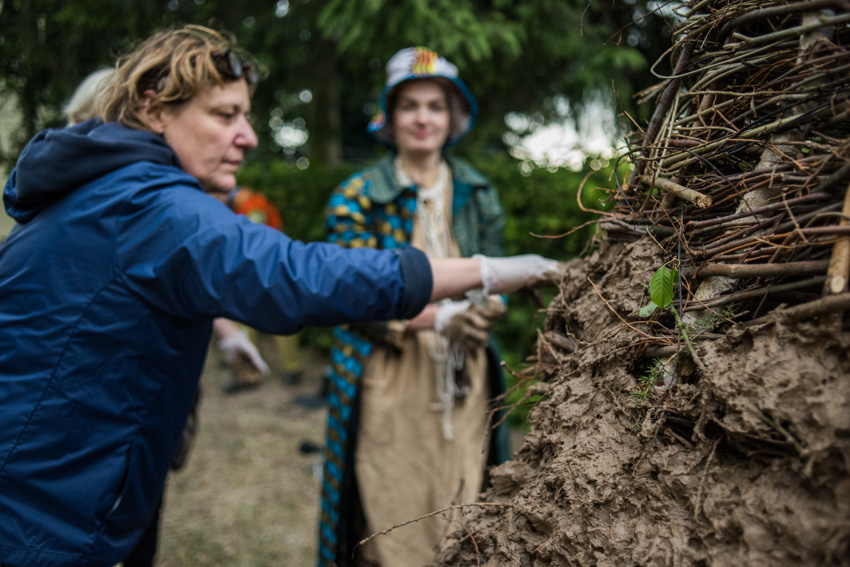